The Deer Garden in Český Krumlov

Original name:
In the beginning of the 18th century the location was called "Thier Garten". The local name Jelení záhrada, meaning Deer Garden, was documented for first time in the 18th century (Hirschen Garten, Hirschgraben, Hirschgarten in German) and it illustrates the original garden function as a game-park.

Description of the garden:
The Deer Garden is located in a broad Polečnice lea strip (Chvalšinský stream). The area is 7 hectares wide. The area borders with the castle foothills on the south-east and west with Chvalšinská road on the north and by street buildings of Latrán quarter on the east. 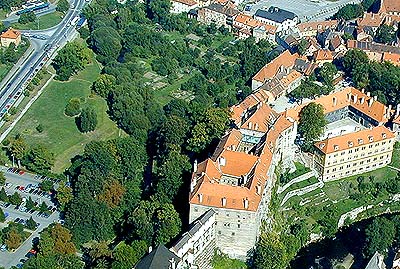 The central part of the garden (with a parking lot and the building of the former seed separating facility - today's Jelenka restaurant) is located in the area of the former Renaissance garden which underwent a complicated development. The green cover consists of plants of various ages. The youngest are the lime and maple-alleys right in the area of parking lot. New plantings of bushes and trees cover the western part of the garden (lea area surrounding Chvalšinský stream) and sallow, aspen, alder, and sycamore cover both banks along the stream. Trees grow on the northern slopes between the castle buildings and Chvalšinský stream lea, and are a mixture of broad-leaved trees with rich shrubs. The eastern left-bank part of the garden along Chvalšinská street is a free grass field with scattered solitary trees and tree groups. A single-row maple alley lies on the opposite side of Chvalšinská street while alders and willows run along the stream in front of the right-bank side of the Deer Garden. The eastern right-bank part of the garden (with its allotment gardens) has a completely different nature in contrast to the previous parts of Deer Garden - the wooded areas are mainly created by fruit trees.

Significant architectonic details:
Some of the historical buildings are still preserved in the territory of the Deer Garden: 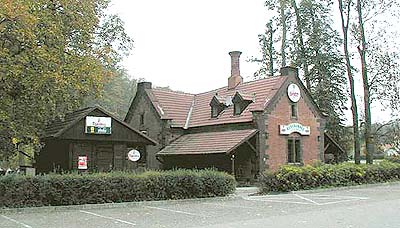 There are also some modern buildings in the garden which went through controversial architectural developments in the last 40 years:

Historical summary of the owners of the Deer Garden area:

The role of the Deer Garden in the town planning structure of Český Krumlov:
The medieval fortification pond in the north forefield of the castle, and later game-park together with various kinds of crafts, have taken a very significant part in forming the urban appearance of Český Krumlov. Even the town planning concept of this area, which dates back to the end of the 16th century (the era of Petr Vok) suffered natural disasters and also damages during the Thirty Years War (especially the liquidation of the pond!) and until recently it determined the extent of this location and to a certain extent its function. For centuries, the historical appearance of the Deer Garden has formed the base of the monumental silhouette of the castle residence. The premise pushed the developed suburbian area approximately 150m towards the north of the castle slope foothills. This historical area was more or less respected in the past, and buildings were rather built in the outer parts of the garden. The second half of this century brought an essential change in the garden's development. The area of the little park near the seed-unshelling house (in the place of the original Renaissance garden on the island) disappeared as a result of its utilization as a bus station. The parking lot built in the beginning of the nineties practically destroyed the entire western half of the historic Deer Garden. Park designing around the blacktop parking spots was included in the construction plan of the parking lot. Both Historical Monuments Authorities and non-government initiatives have forced the designer, investor and supplier to increase the number of trees in the parking lot area. In spite of this, the final appearance has already lost (at least at the built-up and consolidated areas) its garden atmosphere and especially its character as a historical garden! Although it has ensured the necessary number of parking spots near the historical centre of town, the loss of such a large area of the historical garden is unproportionally high. The current usage of a part of the Deer Garden as a parking lot should definitely not be final. The possibility of future rehabilitation of the garden as an integral architectural complex should remain open. 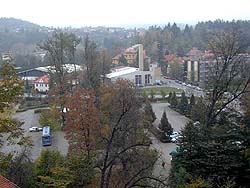 The present function of the garden:
These days the area of the Deer Garden consists of a public municipal green area, allotment gardens and an extensive parking lot for passenger cars and coaches. the Restaurant Jelenka and public conveniences are located in the centre of the garden.