First incidental archaeological researches in the Český Krumlov region date back to the end of the 19th century, and the oldest documents giving information on local sites of a fortified settlement are even one hundred years older. Archaeologists did not draw their attention and were not as much impressed by the area as, for example, by the area called fertile Polabí or Central Bohemia and north-west Bohemia. The Český Krumlov region had ranked among boundary settlement areas during the Primeval Times, early Middle Ages until the 12th - 13th century. There was only little population in several fertile areas, for example, Chvalšiny and Boletice areas. Only single discoveries of primeval articles are a sign of long-distance thoroughfares. Those thoroughfares mostly directed to north-south - from Poddunají area to the centre of Bohemia Basin.

First archaeological monuments - primeval sites of a fortified settlement and medieval redoubts in the Český Krumlov region - were already demonstrated by documentation in late - 18th century. The oldest drawing of the line fortified settlement, Celtic settlement of Třísov, was preserved from the period of Josef´s Bohemia mapping out (1782-1784). Nowadays there are still recognisable lines of the medieval redoubt of Raziberg near Boletice as it is demonstrated by documentation in the Topography of the Bohemia Kingdom by J. Schaller dating from 1789. Other localities were added during the 19th century. For example, some remains of the fortified settlement (a redoubt near Zátoň, 1891), grave-mounds near Čertyně and Záluží from the Iron Age. Adolf Lindner, a custodian and later a director at the museum of České Budějovice, discovered and dug through them in 1888.

First exceptional discoveries of primeval stone and bronze articles come from the end of the 19th century. For example, bronze axes near Dolní Vltavice area and Černá v Pošumaví (around the year 1882), and Novosedly near Kájov (1898), and two bronze swords dating from the Middle Bronze Age (approximately 1500-1250 BC) near the castle of Vítkův Hrádek (1883) were discovered. Other important discoveries dating from the turn of the century: a bronze point of the lance from the early Bronze Age (approximately 1250-900 BC) from Vyšší Brod (1910), the late Neolithic stone axes (approximately 2700-2000 BC) from Michnice (1911) and Benešov nad Černou surroundings (1932) or a bronze sword from Boletice (1925).

Mass discoveries of primeval tools, jewels, weapons or just their fragments belong to significant evidence of the primeval trade. Two places of discoveries were found close to trade thoroughfares in the Český Krumlov region. They had been lastly used in the Middle Ages. There were 165 copper prehistoric necklaces dating from the late Bronze Age (approximately 2000-1500 BC) discovered in Havalda near Chvalšiny in 1904. In the other place there was a collection of bronze articles dating from the Middle Bronze Age (approximately 1500-1250 BC) discovered in Hořice na Šumavě in 1948 (The Bronze Age discoveries in the Český Krumlov region).

The period of the greater systematic interest in some parts of the Český Krumlov region goes back to the war periods, and it is closely connected with Karel Brdlík, a head teacher from Kájov. When the First World War had been over, he started to search archaeological localities, mostly in Chvalšiny, Boletice and Kájov surroundings. He also searched some grave-mounds and settlements during the 1920´s and 1930´s. He professionally co-operated with Leonhard Franz, a professor at Prague German University. All discoveries were carefully recorded and deposited at the Šumava Museum in Horní Planá (the Bohemian Forest Museum) established in 1923. Nowadays the bigger part of the primeval collection including the original control cards are deposited at the Local History and Geography Museum in Český Krumlov. It was catalogued by A. Beneš in 1966. 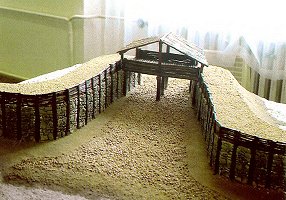 First real archaeological researches in the Český Krumlov region were done by Czech and German archaeologists in 1920´s and 1930´s. In 1926 Albín Stocký and Libuše Jansová dug through several Slavic grave-mounds near the village of Besednice. In 1931-1932 E. Simbriger and L. Franz did smaller probing at the site of a fortified settlement of Radischenberg (today Hill of Hradiště) near Kaplice. In 1933-1934 L. Franz and A. Liebus researched a little cave below the rocky ledge near Dobrkovice (Dobrkovice Cave). The little cave with primeval discoveries (the late Bronze Age - 2000 - 1500 BC, the Halstat Period - 700 - 400 BC) had also been dug through by K. Brdlík near the settlement of Svíba.

After the Second World War the Český Krumlov region had not been systematically searched for a long time. Each archaeological research on some interesting or endangered localities had been done by professionals from different institutions. Some smaller probing were done by the archaeologists from the Prague National Museum. For example, at Raziberg near Boletice by E. Soudská in 1954, and at the Slavic site of a fortified settlement near Kuklov by J. Neustupný, M. Slabina and V. Chocholoušek in 1968-1969. In 1954-1983 J. Břeň did the extensive archaeological research at the Celtic settlement of Třísov. In 1960-1974 J. Poláček (the South Bohemia Museum in České Budějovice) directed his attention to the systematic research of the site of a fortified settlement dating from the Bronze Age at Dívčí Kámen. The medieval castle of Dívčí Kámen had been searched by A. Hejna (The Institute of Archaeology ČSAV in Prague) in 1962. The castle of Velešín and a redoubt in the location of Velešín - Kamenná věž (Stone Tower) were searched in 1973-1976. Completely unknown height settlements and sites of a fortified settlement near Kladenské Rovné, Křenov and Lazce west of the town of Český Krumlov were discovered by A. Beneš (The Institute of Archaeology in Plzeň) in 1960´s. (Primeval sites of a fortified settlement in the Český Krumlov region).

The interest in the systematic research of the Český Krumlov region has intensified since 1990´s. In the late 1980´s S. Vencl published the discovery of almost twenty settlement remains dating from the Stone Age-Mezolith - (approximately 8500 - 5500 BC) discovered along both water´s edges of Lipno dam (Mezolith Period Lipno Settlement). The evidence of immovable archaeological monuments in the Český Krumlov region was done at the same time (J. Michálek, P. Zavřel). In the middle of 1990´s workers (the Local History and Geography Museum in Český Krumlov) followed up with their researches, mostly in Chvalšiny, Kájov, Blansko and Kaplice surroundings and the area called "Kouty" (Corners) located between Zlatá Koruna and Kamenný Újezd. Lately archaeologists directed their attention to non-discovered height settlements and sites of a fortified settlement. For example, a newly discovered primeval site of a fortified settlement on Hill Střížek near Brloh, a height settlement of Velešín-Kamenná věž (Stone Tower) and documentation giving information on medieval remains of rare metal mining and washing.