The town of Český Krumlov came into existence relatively late, around the second half of the 13th century, in a countryside settled already in the 12th century. For this reason it was spiritually administered by the parish in Přídolí, that is until sometime between 1309 - 1317 when Peter I. von Rosenberg founded the town's parochial St. Vitus church (see St. Vitus Church in Český Krumlov) and the St. Venceslas Chapel next door. These consecrations were apparently an expression of Peter's ambition, as he wanted to imitate the St. Vitus Church at the Prague Castle. Besides this, he established a hospital with St. Jošt Church (first mentioned in 1317) (see St. Jošt Church in Český Krumlov) and St. George Chapel at the Castle, both administered by the chaplains of St. Vitus Church. Peter's widow, Catherine von Rosenberg, and her sons founded the Minorite Monastery and the Clare Nun Convent (Minorite Monastery in Český Krumlov) in 1350 with the Church of the Body of Christ and of the Virgin Mary of Our Sorrows, the aim of which was to weaken the Valden doctrine in the town and in the surrounding area. In this convent, the Rosenbergs initiated the magnificent Festivals of the Exhibition of Sacred Relics together with a procession on the occasion of the Corpus Christi Day; this way they managed to win plenty of indulgences for themselves (see Festival of Relics Showing in Český Krumlov). This was how the Rosenbergs intended to compete openly with Prague, where imperial jewels and imperial relics were shown at the Corpus Christi Chapel. These famous processions with relics saw their last days in Český Krumlov when the young Ulrich II. von Rosenberg quickly joined the Hussite movement in 1417. 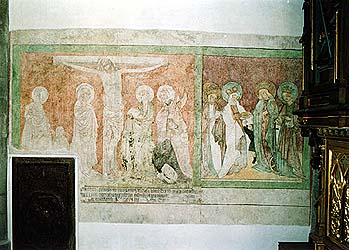 An important parish priest was Hostislav von Bílsko (1369 - 1414), under whom the dean's office was transferred from Doudleby to the parish of Český Krumlov in 1374. The dean initially represented the parochial clergy of a certain parish which was then connected with the bishop or his representative, in this case with the archdeacon of Bechyně. Hostislav initiated and launched the construction of a new parish church of great artistic value that, owing to the catholicism of the Rosenbergs, could be constructed even during the Hussite wars. The church was consecrated in 1439 to the glory of the Virgin Mary Assumpted and St. Vitus. From 1443, the local parish became the seat of the archdeaconry which contained seven deaneries. It is true that the archdeacons in Bohemia were completely dependent on the Bishop, but they did have some power to order independently, to punish convictions of the clergy, make visitations in their parish and so on. From the first half of the 14th century, this organization of archdeaconries began to shrug off the shadow of the new central archbishop's institutions, thus leading to an increase in the importance of the deaneries. In the 15th century, Český Krumlov was a very important catholic town where Roman delegations used to stop, for instance Aeneas Silvius Piccolomini and Jan Kapistrán. The chaplaincy in Český Krumlov was one of the most important cultural centers of early humanism in Bohemia.

In late 15th century, German miners began settling into Český Krumlov; in the 1520's their Lutheran faith began to penetrate into the local Minorite Monastery. Between 1526 and 1537, a group of New Baptists is attested to have existed in the town. The growing influence of the Lutherans and of the Utraquists was suppressed by the Jesuits, invited in 1584 by Wilhelm von Rosenberg who in 1592 committed them the patronage of the parochial St. Vitus Church and founded the Jesuit College (Horní No. 154). The last sovereign of the House of Rosenberg, Peter Wok von Rosenberg, from 1587 a member of the Unity of Brethren, offered the St. Jošt hospital Church to the Lutherans in 1596. In 1602, after the sale of the Krumlov estates to Rudolf II. von Habsburg, the same church was taken over by the Jesuits who preached there in German. In the parochial church the sermons were preached in Czech until 1788, when St. Jošt Church was abolished. The Czech language, thus threatened, was strongly defended by the vicar Jiří Bílek from Bílenberk (1642 - 1658); (the title of Dean and Archdeacon was only honorary since the reorganization of the parish administration in 1630; the old system of deaneries was replaced by vicariates; the vicars represented the Bishop in their parishes and executed his instructions). Jiří Bílek obtained for himself and his successors the grade of infulated prelate that gave its bearer the power to execute some of the bishop's competencies.

In the second half of the 17th century, the Minorite and Clare Nun Monastery enjoyed a new prosperitydue to their close connection with the town and with the Castle nobility. On the basis of the testament of Johann Christian I. von Eggenberg from 1696, the Minorites would celebrate the daily mass in the St. George Castle Chapel. There was a continuing rivalry between the Minorites, who managed to merge with the town's milieu, and the Jesuits with their more official ceremonies and theatres. At the beginning of the 18th century, there were five religious societies of Brethren and on the nearby hill Křížová hora (Hill of the Cross) a frequently visited pilgrimage chapel was constructed - Chapel on the Mountain of the Cross in Český Krumlov. In 1773, the Jesuit Gymnasium and College were dissolved as was the Clare Nun Convent in 1782. During the era of the reforms of Emperor Joseph, the Minorites (expelled only in 1950) together with the Schwarzenbergs supported the old religious traditions. From 1859 the Minorites led the Third Franciscan Order. After 1918, the German Boy's Seminar was founded in Český Krumlov. 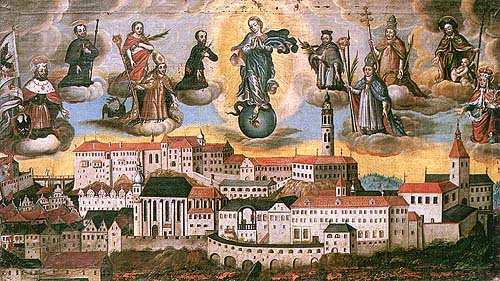 In 1894, Český Krumlov registered 9,002 Catholics, 12 Evangelics and 137 Jews. The Jews are documented to have been there already in the 15th century (expelled in 1494); their maximum number was 165 people in 1900. In 1908 to 1910 they constructed a synagogue (Synagogue in Český Krumlov). The synagogue was used between 1945 and 1968 by the Czechoslovak Hussite Church; at present, in 1998, in addition to the above named church, also in existence in Český Krumlov are the Roman Catholic Church, the Church of Czech Brethren, the Evangelic Church, the Seventh Day Adventists and Jehovah's Witnesses. In addition to these, about 10 or 15 religious sects are effective here.