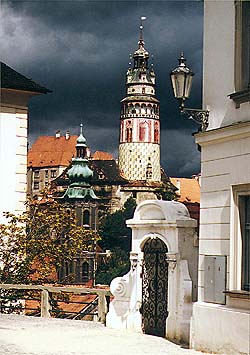 The development or failure of culture in Český Krumlov was and is influenced by many circumstances. The region was not an ideal place for settling even though a few quite small settlements were established in the surroundings as early as the Stone Age. Those, however, tended to be rather short-time stays of hunting groups as in the case of so called Dobrkovická Cave where were findings belonging probably to the Aurignacian civilisation and dating approximately from 80,000 - 40,000 B.C. The evidence of the settlement of the cadastre of today´s town is also supported by findings from the Hallstatt period (1000 - 500 B.C.) as well as from the Slav Period (the 8th - 9th centuries A.D.).

Actual permanent settlements came into existence by a period of intensive colonisation in the 13th century. The cultural development then depended narrowly on the success and failures of the nobility but also on interests of other social classes, particularly the church and later the burghers as well.

Below the castle and in the meander of the river a town which had been associated with the House of Rosenberg since 1302 began to spread in the second half of the 13th century. The first significant stage of the building development of Český Krumlov is connected with the name of Peter I. von Rosenberg (died in 1347). The town spread, was fortified, the Český Krumlov Castle was extended and a number of church buildings came into existence - St. Jiří Castle Chapel, original St. Vítus Church, and the St. Jošt Hospital with a little church on the Latrán. Later a Minorite Monastery and a Clare Nuns Convent were founded. The Rosenberg Court and church institutions were in particular significant owners and buyers of artistic works, made in the so-called "Beautiful Style" at the end of the 14th century, both sculpture and painting ones - in the latter church sphere it was book painting above all. The beginnings of the literary tradition and education system in Český Krumlov also go back to the 14th century.

The 15th century, the first half of which is connected with the reign of Ulrich II. von Rosenberg, meant another period when culture flourished, unlike in other regions which were affected by the Hussite Wars. In that period many personages who significantly contributed to that development searched for security from the turmoil here. As early as around 1400 appears the first evidence of musical life of Český Krumlov; the Rosenberg and Chapel Libraries, the home painting workshops begin to operate, the St. Vítus Church was rebuilt and before 1500 a Rosenberg building metallurgical plant was founded.

After 1470 the importance of Český Krumlov declined, probably in connection with the Rosenbergs´ temporary departure from the political scene, however, the Late Gothic style is represented here by a number of architectonic, sculpture and painting monuments. Many cultural activities, besides others the beginnings of the theatrical tradition, are connected with the name of the Rosenberg Chancellor Václav z Rovného. 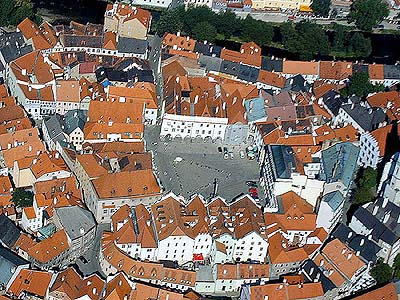 In the second half of the 16th century almost all cultural events in Český Krumlov were subordinate to the needs of the last Rosenbergs, Wilhelm and Peter Wok von Rosenberg. The Renaissance reconstruction of the Český Krumlov Castle, sculpture and painting decoration, music, theater, literature - all these were to serve to the representation of the Renaissance Magnates in a high social standing. Of course, the influence of the Rosenberg Court manifested itself in the cultural development of the town as well. The establishment of the Jesuit College concentrated on preaching and pedagogical activities and significantly contributed to this.

The departure of Peter Wok von Rosenberg from Český Krumlov to Třeboň in 1602 meant the discontinuity of the Český Krumlov Castle as a residential function and consequently a decline of cultural activities. After two decades of the emperor´s administration the Styrian House of Eggenbergs arrived. The Thirty Year War in the first half of the 17th century, although Český Krumlov was not almost affected by it at all, as well as the long absence of the nobility at the castle made revival of the cultural activities impossible.

Its revival finally arrived with the reign of the third generation of the House of Eggenbergs when Johann Christian I. von Eggenberg chose Český Krumlov as his seat after 1665. The castle premises had to be adapted to the changed demands of this Baroque aristocrat who surrounded himself with clergymen, domestic as well as foreign musicians, actors, painters, sculptors and scientists. Baroque galas which affected feelings, fantasy and all the senses were transferred from the castle chambers into the gardens and the settlement around the manor house. The transfer of culture of the nobility into the burgher locale is a natural result of this development which continued under the reign of Joseph Adam zu Schwarzenberg (1722 - 1782) as well. We are obliged to him for founding the Masquerade Hall in the Castle or for the reconstruction of the Castle Theater. The cultural life in Krumlov was to a certain level influenced by the religiousness of the Baroque.

In the mid-19th century the attention of the Schwarzenbergs was drawn to the reconstruction of the Hluboká nad Vltavou Castle where they later transferred their main seat. The deserted Český Krumlov again lost the lustre of a residential seat, became a provincial town excepting industrialisation, whose cultural life was limited to the activities of social groups and clubs. In the 1870's tourism, photographic art and later film began developing and are connected with the opening of a cinema in Český Krumlov in 1911.

In the 20th century the theatrical tradition was enriched with the South Bohemian Theatre Festival since 1947 and has continued with performances at the open-air theater with revolving auditorium in the Castle Garden since 1959; in this case the architecture is subordinate to the needs of modern society. In the last decades a number of cultural events in the areas of music, theater and fine art, promising to link up the traditions and to enlarge the life of the person of our modern epoch have come into existence.