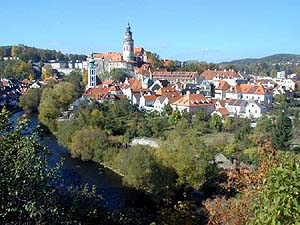 The former Renaissance Rožmberk garden is located in the north part of the historical centre of the town of Český Krumlov. The garden is located on the left bank of the Vltava river in Latrán quarter, to the south of the monastery gardens.

Original name:
In the 16th century the garden was called "the garden Nové město". It is called "court garden" in some documents dated back to the period of the princes of Eggengerg. After founding today's castle garden it was called "lower court and kitchen garden". In the twentieth century a confusing name "Pivovarská (brewery) garden" was used. Last published studies use the original name dated back to the 16th century which is simplified for our purposes to "Novoměstská zahrada" - New TownGarden.

Building description:
The garden has a shape of an irregular bent rectangle - 200 meters long and 75 meters wide. In the north it bounds with the garden wall demarcating the garden along Pivovarská street. At the former gardener's house the bounds jumps to the south and runs along yard facades of burgess houses. The garden is bounded by a wall along Na fortně street in the west. The southern bounds of the garden consist of the town wall curve, all the way to the corner section of brewery premise that also encloses the garden in its shortest eastern side. The original biological material of the garden has not been conserved. Nowadays New Town Garden's nature is of extensively exploited over-aged orchard with just a few decorative or forest trees. The western part of the garden owned by Česká Kooperativa a.s. has been gradually reconstructed since spring 1999.

Architectural elements of New Town Garden create the most important part of its historical value. These are:

Architecture-historic development:
New Town Garden was founded after the middle of the 16th century as a town garden of a predominantly utilitarian type. In its appearance the garden was still influenced by the aesthetics of medieval gardens. Between 1594 and 160 Petr Vok of Rožmberk rebuilt the garden (including the whole architectural structure of the former manorial house) in a manneristic style into an important town palace garden including rich architecture program and valuable garden design. Despite several changes of owners and maintenance lapses, the garden kept its nature and concept. In the 1660's the garden temporarily revived and its representing and housing function were strengthened (construction of tennis court and grotto). From the seventies of the 17th century we can see gradual degradation of the garden to a utility "kitchen" manorial garden. The 1764 plan documents conserves the manneristic composition of the space. After 1762 the garden as a whole has lost its integral nature. The part with original garden functional buildings and gardener's house had been functioning as a utility kitchen garden until 1870. In contrast to that a large of the garden area (though still as a manorial property) was rented out to castle clerks and changed its nature into a citizens' gardens.

History of the garden: 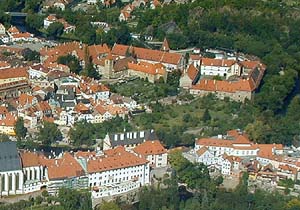 The role of New Town Garden in the town planning structure:
The founding of the manorial garden in Nové město in the second half of the 16th century and later construction of a new Rožmberk armoury (antecedent to the old building of today's Eggenberg brewery) caused the liquidation of a large built-up area in gothic Nové město. An extensive architectural structure of the former manorial house, manorial garden and armoury (construction began in 1594) was started thanks to the decision of the ruling Rožmberks who forced the new manneristic concept of this part of town in spite of necessity to do extensive demolition works on many retainers' houses. Studying the later Renaissance town-planning undertakings in Bohemia we can find a comparable, even more radical, case in post White-Mountain Prague - the founding of Albrecht of Valdštejn residence in Malá Strana. The historically arisen premise of the Rožmberks' town residence with the extensive garden together with the neighbouring premises of Latrán monasteries constitute a special nature of Krumlov quarters Latrán and Nové město. A comparatively historically authentic proportion between developed areas and free space in gardens, a practically untouched composition of historical dominants of this town area, a built-up area untouched by new regulations and sanitations are the main features of the town-planning structure of the area of Latrán and Nové město, of which New Town Garden is an integral part. The co-existence of a valuable historical settlement in this part of town along with the exceptionally impressive landscape relief of the Vltava meander are the most precious urban values of this area, which have been appreciated by registering the historical centre of the town of Český Krumlov onto the UNESCO World Cultural and Natural Heritage Registry.