History of Gates and Fortifications in Český Krumlov 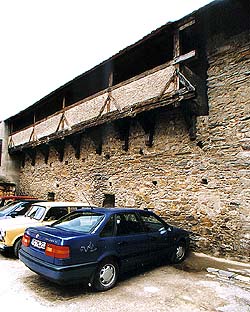 Although the historical center of Český Krumlov belongs to the most preserved of town monuments in Bohemia, its original Middle Age appearance was partly changed during the last century when a major part of the town gates that had served as an indispensable part of a medieval town defense system - fortification - were taken down.

Today, the historical center of Český Krumlov can be entered from all the cardinal points. Main streets used to be ended by town gates. Defense fortification was a typical feature of medieval Český Krumlov and, since the town walls always belonged to municipal privileges in Middle Ages, its walls and gates have even been preserved up to now in its emblem (Evolution of the Český Krumlov Emblem). This ingenious system involved ramparts and several town gates and bastions. Originally, there were nine main town gates in Český Krumlov; however, only one has been preserved to these days, Budejovicka Gate. Also preserved are scanty remains of an original fortification in Kajovska street, and a bastion nearby the brewery. Most of the town gates and fortifications were pulled down during the transportation and industrial development in the 19th century. 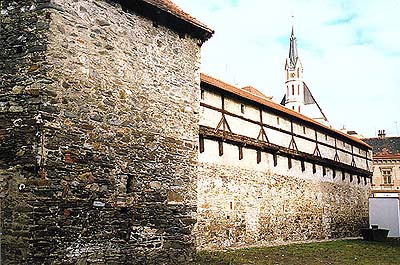 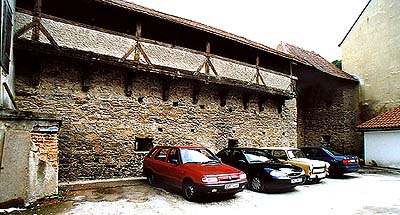 A town gate used to guard the entrance into a medieval town and was usually constructed as a part of the fortification. It was often built as a sophisticated separate unit with a passage. The gates were "inserted" into ramparts as defense towers, or between blocks of houses. Originally they were closed either by a trap lattice or a drawbridge. If the town was not surrounded by a moat, the gate was closed by the trap lattice that moved up and down within stone grooves inside the gate. Otherwise, the gate could have had a drawbridge over the moat that was lifted up by means of pulleys hidden inside the gate as well. 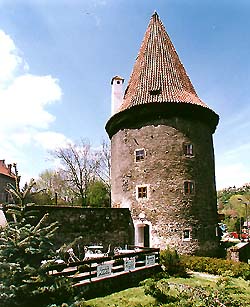 Almost all the town gates disappeared during the last century when transportation and industry in towns developed significantly and the fortification lost its importance and even caused traffic problems. Vaulted passages of the town gates often prevented or delayed traffic since fully loaded vehicles had to unload part of theie goods in front of the gate and reload it again after having passed through the gate. Some gates were already badly damaged before being pulled down and their condition only speeded up their liquidation. Since most of the gates were multi-floored towers, this hindered the natural air ventilation of the streets. Each tower used to have a small apartment upstairs consisting of a living room, a chamber and an entrance corridor with a staircase. The larger ones even had a kitchen and a toilet. Such spaces served as a small-size apartments or warehouses.

The only preserved and probably youngest gate in town is Budejovicka Gate built at the costs of Peter Wok von Rosenberg by Domenico Benedetto Cometta of Eckthurn in 1598 - 1602. The entrance to the gate originally led through a wooden drawbridge. Another one called Latranska Gate which used to stand nearby Budejovicka Gate was first mentioned in 1459 and originally had three stories and an exposed external staircase. It was pulled down in 1848 - 1852 due to the floods that had seriously damaged part of the street near the gate in 1848. The second Latranska Gate which guarded the entrance to Latran from the other side of the street used to stand at the Lazebnicky Bridge and was pulled down in 1835 during the bridge reconstruction following serious damage to it by ice floes in 1830. Mostecka Gate stood on the other side of the bridge and was pulled down in 1860, as it was worn out and damaged by a windstorm. The gate in Radnicni street was in very bad condition, too. It was taken down in 1842 - 1844. Other two gates were located in Kajovska street. The first one was removed in 1842 and the second in 1860. The Upper gate was demolished in 1839. The least important gate was the one at the end of Široka street that held out until 1880. 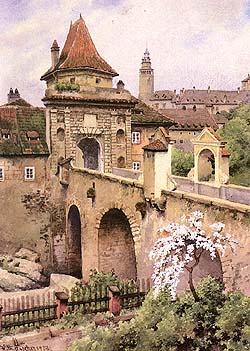 Rudolf Thur tried to picture the single town gates in 1914 - 1916. That was the period when most of the gates had already been demolished, therefore it was just an attempt to reconstruct an ideal status of the town fortification. Despite the broad popularity of Thur´s studies, it is almost impossible to perceive them as an accurate icon of reality.

A museum collection that documents the town fortification of Český Krumlov is to be found in District Museum of Natural History in Český Krumlov at the second floor in a hall dominated by a ceramic model of the town. The exposition presents mainly pictures of the town gates from the museum collection. Regarding to the museum location, the greatest emphasis is laid on the former Horní (Upper) Gate presentation in today´s Horní Street. The hottest novelty among the items are newly restored oil paintings on tinplates which used to serve as a window panels and are reminiscent of a former gate tower. The overall picture of the town fortification may be studied not only on the ceramic model but also on frescoes by Antonín Langweil or Karel Postl from the first half of the 19th century.