History of Schools in Český Krumlov 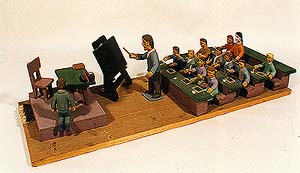 The beginnings of the educational system in Česky Krumlov reaches back to the middle of the 14th century when the first local culture and educational center worked under a parish church (see St. Vitus Church in Český Krumlov ).

The Latin school in Česky Krumlov experienced its best times during the second half of the 15th century and at the beginning of the 16th century when priests educated mainly at Italian universities significantly contributed to the spiritual life of the local Catholic minority. Graduates of that school would go on to Catholic universities in Vienna, Krakow and Bologna. The connection of the town with an Italian environment brought in first hints of humanism. There were usually 50 up to 80 students in the school. 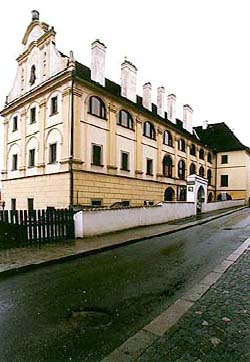 The education further developed under the rule of Wilhelm von Rosenberg who called the Jesuit Order into town. In 1584, the Jesuit Václav Šturmlaunched official education and later became the first rector of the Jesuit College. The College establishment was first negotiated by Wilhelm von Rosenberg in 1585; a year later first foundation stone was laid in today's Horní No. 154. In the middle of the 17th century the Jesuit Order area was enlarged with a new Jesuit Theater building (Horní No. 153) based upon an old wooden Jesuit Theater tradition and in particular on an early Baroque construction of new Jesuit Seminar from 1650 - 1652 (Horní No. 152). This building served new types of educational purposes even after the Jesuit Order had been dissolved until 1945. A Czech educator, literate and historian Bohuslav Balbín was the most significant schoolmaster working here.

Jesus' Journeymen was an order founded by Ignazius from Loyola in 1534 and confirmed by the Pope in 1540. Its members were active in anti-reformation efforts and attempted to re-establish up the Catholic Church influence. One of its main tasks, then, was youth education. It was the intention of a Protestant school founded by Peter Wok von Rosenberg to balance the Catholic-oriented environment of the Jesuit College. The Protestant School was located in the former widow's residence of Anna von Rosenberg from Rogendorf. Unfortunately, the local residents were not very interested in such a kind of school, so Peter Wok observed that there was no reason to maintain such an institution any longer.

Theresian school reform from 1774 used to establish so-called main schools in each region besides elementary ones. One of the main schools was also established in Česky Krumlov in 1789. It was situated in the former Jesuit Seminar building (Horní street no. 152). In addition to "trivium" (reading, writing and counting), students were taught not only basics of Latin language, geography, natural science, styling, drawing and geometry but also basics of economy. German was used as the educational language. Slowly the school gained respect and was attended even by students coming from the Tábor and Plzeň regions. 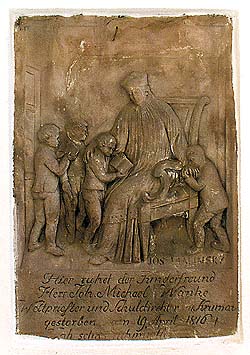 In 1843, prince Jan Adolf II. zu Schwarzenberg issued an order that limited the number of forestry students to four students per year. In addition to this, the applicants had to pass an entrance exam and to commit to attend all the lectures given during the first and second year of the Institute education. As we can judge from the students lists preserved with small breaks from 1814 up to 1843, approximately seventy students attended the school during that period. They usually became administrators of sovereign's forests. The school closed down at the end of 1844.

The first classroom in a private German high school was opened in November 1, 1871. It was attended by 16 students only. After repeated requests supported by the Prince Schwarzenberg, the school's administration was taken over by the government. Some rooms in former Jesuit Seminar building were emptied for its purposes. Unfortunately, the contribution of 10,000 gold tollars was too much for the town to pay, and for his reason the school became a target of tax payers' complaints which were actually strengthened by the fact that only few students were attending the school.

Nevertheless, the number of students increased up to 140 in 1880. Moreover, the students were usually poor, did not pay the school fees and were given their textbooks free. The scandal when drunk graduates damaged and dishonored a picture of the ruler (1889) did not help the school's bad reputation either.

The czech school was established as a private one by the Central Educational League in 1882, and 225 children applied for the first year. Its original location was in a house on the Square no. 17. Because of a lack of space, another classroom had to be opened in a building in Radniční street no. 101.

Unfortunately, increasing feelings of nationalism and disputes between both nationalities in town were causing considerable delays. Although the Provincial Educational Council established a public two-class school where the pupils were taught in Czech language, it was a local school council who was obliged to find appropriate rooms and provide its operational support. German residents then had the main word in it and allowed no effort to limit or hamper its work. Eventually the school was placed in the Theater building in Horní street no. 153.

The inappropriate location of the Czech schools over several places in town and Czech residents' complaints made the government erect a new school building. The first foundation stone of the Czech School Building was laid in June 26, 1927, in Špičák; Masaryk's National School, as it was named, was then opened in August 25, 1929.