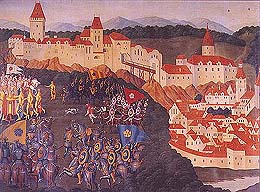 Only four aristocratic families entered eventful the historical development of Český Krumlov as their residential domicile. The Bohemian-Krumlovian castle was found by the Lords of Krumlov who were the one from many branches of the Czech clan the Vítkovcis. Very soon a settlement around the castle began to form - the foundation of the contemporaneous town. The Krumlovian branch of the clan died out in 1302 and its property was passed to the Rosenberg clan which was also one of the original branches of the Vítkovci clan. Český Krumlov had been in possession of the Rosenbergs for three centuries, so they went down in the history of the town and the castle to a considerable extent. 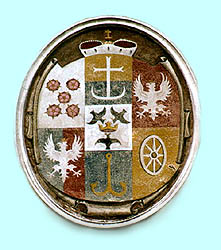 Peter I von Rosenberg influenced mainly the ecclesiastic life in the town in the first half of 14th century because he helped to build a castle chapel church of St. Jošt and a Minority monastery was found from his bequest. Ulrich II von Rosenberg created a bastion of Roman Catholic religion in the south of Bohemia from Český Krumlov in the rough times during the Hussite wars. Český Krumlov reached its biggest and unparalleled extent under the rule of Wilhelm von Rosenberg as the town obtained its new - and present - quite lucid Renaissance appearance. As Peter Wok von Rosenberg did not produce an heir, he sold the Bohemian-Krumlovian dominion to the emperor Rudolf II von Habsburg in 1601.

With the approach of the new clan the Eggenbergs in 1622, Český Krumlov became the residential domicile of principality and Krumlovian duchy in 1628. During the rule of Johann Christian I von Eggenberg the town went through a new constructional and cultural boom as it witnessed a whole row of Baroque buildings in the town and even in the area of the chateau. The Eggenbergs were replaced the Schwarzenbergs in 1719 and residential Český Krumlov again became a significant cultural, political and social centre which went through a period of prosperity during the rule of Josef Adam zu Schwarzenberg. The agricultural and cultural boom of the town ceased in the second half of 19th century, a fact which ultimately had a positive influence on the preservation of the town's medieval appearance as industrial development did not erode the historical appearance of the centre. Český Krumlov was still under the administration of the Schwarzenberg clan until 1947. 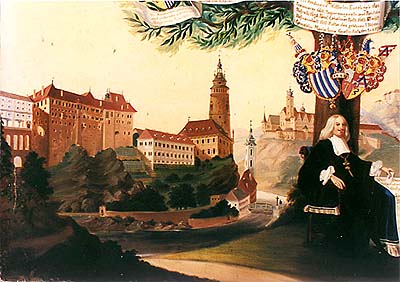