Gardens of the Former Minorite monastery in Český Krumlov

Object description:
The area of the former Minorite monastery is accessible through the Baroque gate from the street Klášterní ulice, behind which spreads the courtyard called Tramín. All main parts of this area are accessible from this place - the church of Boží Tělo and Virgin Mary the Pained, the larger Minorite monastery, to which a smaller convent of bequines and the convent garden is enclosed from the south side. The garden is demarcated on the west by a line of houses in the street Dobrovická ulice, and by and enclosing wall from the street Pivovarská ulice, and further by other buildings and another wall reaching as far as the church of Boží tělo. 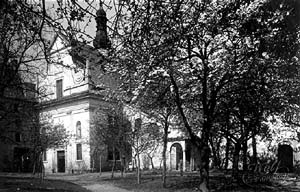 The courtyard Tramín (the area of the former monastery cemetery) is delimited on the north-east by a block of buildings of the convent of the former Minorite monastery with a bell-tower and the church of Boží tělo and Virgin Mary the Pained, on the south-east by the enclosing wall of the monastery garden (former orchard), on the south-west by houses no. 31, 32, 51, 54 and 55, and on the north-west by the convent building of the former convent of Clarissian nuns. The east facade of the monastery church, the open stairs on the church choir and the tower are considerably applied in the composition of the courtyard. The spreading of the paths on the courtyard corresponds to a large extent to the original plan, and the paths are fixed by stone paving. The space between the south-east convent facade of the convent of St. Clarissian and the bell-tower is filled by a group of well-grown leafy trees.

The paradise court of the Minorite monastery:
The convent cloister of the Minorite monastery, originating from the year about 1500, is of an oblong ground plan. It is opened to the paradise court by three- and four-pointed windows with the original plentiful stone traceries (part was substituted by new ones in 1887) and stone props. The space of the paradise court is mostly occupied by the early Baroque chapel of Virgin Mary Einsiedelská, built in 1686, by which the previous arrangement of the paradise garden was destroyed. At present, the cloister is being reconstructed. The original garden arrangement does not exist at present.

The paradise court of the convent of bequines:
The paradise court is demarcated by the cloister of late Gothic origin, which is applied to the court by windows with tracery, eight buttresses and a ridge portal. The closed space of the original paradise garden has a stone oblong fountain in its centre (it is not in operation due to the non-functioning original water supply system). The area of the paradise garden is not fully benefited. The garden arrangement of the court has not been preserved. At present, the area of the former paradise garden is grown over by blitz.

The monastery garden (former orchard and kitchen garden):
The garden is enclosed on the north-east by the brewery buildings ( Latrán no. 27) by the original enclosing wall with a gate, on the south-east by the original enclosing wall opposite and along the street Pivovarská ulice, on the south-west by houses and the enclosing wall and houses no. 29, 30 and 31, on the north-west by the enclosing wall with extensions of sheds. It includes the former orchard (south of the courtyard Tramín) and further the narrow strip of gardens between the Minorite monastery and the brewery buildings, probably used in the past as the kitchen garden. The arbour at the south-east wall was the only thing preserved from the original garden buildings, and it is in a very bad condition today.

The garden arbour was annexed by its longer side to the enclosing wall, whose bow-shaped curse forced a part of its section to be knocked down (the east corner of the arbour thus partially invaded the space of today's street Pivovarská ulice!). The attic roof covered with shingle comes over the top of the walled ground-level building on the ground plan for about 9,5 x 4,5 meters. The north facade of the arbour oriented to the garden has three axes (with 2 window axes on each side of the central door opening), and the openings are ended with elliptical wedges. 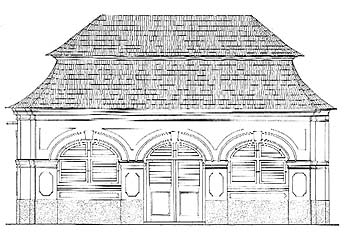 The orchard lays on a mild south-east slope, arranged to three terraces, the fronts of which create the dry stone walls. The geometrical scheme of the paths, as it is shown by the monastery area plan from the time about the year 1900, is still recognisable in the division of the garden to individual rented parts. The growths of wood species on the area of the former orchard are created mainly by fruit trees; the decorating wood species occur sporadically - in association to the building objects. There are very old (from 100 to 150 years) exemplars of yew-trees (Taxus baccata) in front of the garden arbour, and a well-grown laburnum (Laburnum angyroides) grows by the south-west corner of the convent of the bequines.

On the area of the former kitchen garden, there is the so called 'lourdská jeskyňka' - "Lourdes Cave" from the non-plastered stone masonry with a niche for a little sculpture of the Virgin Mary (probably originating from the beginning of 20th century). The fruit wood species are predominant in the growth of wood species in this part of the monastery garden - superannuated and insufficiently cut pear-trees and apple-trees. A pair of yew-trees (Taxus baccata) - (about 80 or 100 years olf) - grow in the north corner of the garden between the chapel of St. Wolfgang and the presbytery of the monastery church. The "Lourdes Cave", at present unfortunately grown over with a blitz of European elderberry bushes, is framed by a pair of spruces (Picea pungens) at each side. The wall, to which this interesting object is annexed, is grown over with ivy.

The role of the Minorite monastery in the urban structure of the town:
The historically created area of the Minorite monastery (with an exceptionally extent collection of gardens for the conditions of a Medieval town) essentially creates, together with the area of the neighbouring convent of Clarissian nuns and the territory of the New Town Gardens, a specific nature of the Latrán district of Český Krumlov. The relatively authentic proportion of the built-up spaces and empty garden areas, practically untouched composition of masses of the historical dominants of this town space, the built-up space of the territory is untouched by newer regulations and area clearances - these are the main characteristics of the urbane structure of the area of Latrán and the New town, in which the Minorite monastery gardens create a distinguished part. The coexistence of the valuable historical settlements of this part of the town with the exceptionally impressive scenic relief of meander of the river Vltava, is the most valuable urbane merit of the territory (which found an evaluation in writing the historical center of the town Český Krumlov into the List of World Cultural and Natural Heritage of UNESCO...).

Present use of the gardens: 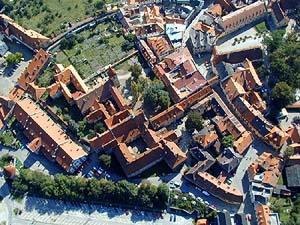