While walking through the Krumlov, your attention might be drawn by the many heraldic emblems placed on the fortification walls, on the walls of the castle buildings, on the town houses, on the walls of monasteries and on the old tombstones. Besides these painted, stone and stucco emblems, the same symbols can be found in the decorations and furnishings of the castle interiors, painted on the walls and ceilings of the rooms, embroidered on the backs of suite chairs and engraved into glass and porcelain. The emblems of wax seals were also of great significance, because they served as a means of verification of the validity and authenticity of the contents of issued papers and documents.

Heraldic emblems began to develop in the Czech lands in the first half of the 13th century. A coat-of-arms was originally a colourful emblem on the armament, most often on the shield, characterizing a particular person or its fighting unit in the battlefield. The basis of a coat-of-arms were emblem signs, usually of stylised pictures of animals and objects. In the ensuing period, these military symbols entered the judicial, administrative and social sphere and became an attribute of a specific member of the nobility and his territory. Even though a coat-of-arms would have originally been of a personal character, the claim to a coat-of-arms soon became hereditary in noble society. Coats-of-arms had a simple character in earlier times, but as the ages passed, individual family members often made individual enlargements and modifications. As a rule, a married woman would combine the coat-of-arms of her family together with the coat-of-arms of her husband. In some cases, a married couple would use a common, so-called alliance coat-of-arms. This would be two independent coats-of-arms of the wife and husband, bound together.

As time passed, even towns and ecclesiastic institutions began to use proper emblems. Municipal and public coats-of-arms began to develop in the 14th century. As a rule, a municipal coat-of-arms contained a significant symbol of the fortification privilege (towers, city walls, gates), while tributary towns usually borrowed the coat-of-arms of their authority into their shield. The Český Krumlov coat-of-arms draws elements from both its fortification and its authority. (see Evolution of the Český Krumlov Emblem).

The emblems of ecclesiastic dignitaries, monastic orders and holy communions began to develop as early as the 13th century, similarly as the town emblems. They usually contained the sign of a cross, insignia of ecclesiastic ranks, mitre, crosier, palladium, hats the colour of the particular rank with appropriate braids, knots and tassels. Some of the monasteries borrowed into their emblems the coat-of-arm of their founders or the emblems of the holy orders. If you keep an eye out while walking through Český Krumlov, you're certain to come across various emblems of monastic orders, monasteries and ecclesiastic dignitaries. (Ecclesiastical Emblems in Český Krumlov). 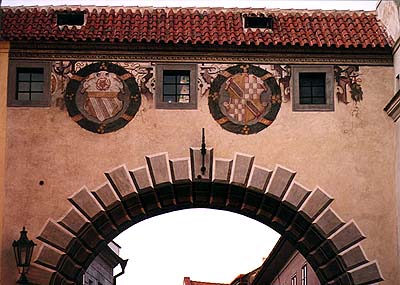