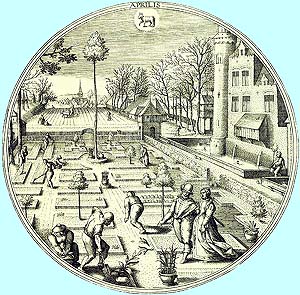 In the middle of the 16th century, to the south of the cloister grounds the garden and the widow's residence of Anna of Roggendorf at Nové Město emerged (Novoměstská garden). The serf houses and yards with their gardens originally situated here were bought, and on their place city seigniorial garden gradually emerged, probably still of a medieval character. In the middle of the 16th century, gardens and vineyards were also situated on the south slopes under Horní hrad (the upper castle). In the 16th century, gardens also emerged on the hills to the west of the Český Krumlov castle, on the place of the later castle gardens. From the middle of the 15th century, the medieval fortification of the western field in front of the castle, so called Plášť, demarcated an interior protected territory where eventually seigniorial gardens emerged (see the local indications "zahrada na Plášti", "plášťová zahrada"). Until the year 1555 the existence of a summerhouse (lusthaus) here is substantiated with documents. An interesting fact is that in the close vicinity of the seigniorial gardens, as is supported by a report from the year 1554, the garden of the men's tailor Linhart Hyrš was situated. We have relatively many reports about the existence of burgher's gardens and farmstead gardens from the second half of the 16th century; some difficulties are caused by their localisation, but the main problems are due to the scarce information about their appearance. Among the significant ones are the courtyard with garden of the Rosenberg hejtman Jan Benýtek, the protégé of Petr Vok of Rosenberg. The establishment of a water main for the residents of Plešivec was particularly due to these good relations between the hejtman and the Rosenberg ruler, which supplied the courtyard of Benýtek and other houses at upper Plešivec with water from the seigniorial gardens (i.e. from today's reserve garden centre of the castle administration). From the year 1612 we have the report that the abbess of the Clarissian cloister bought hop-gardens and fields in the suburbs of Budějovice from the painter Bartoloměje Beránka Jelínka. Besides gardens, orchards, hop-gardens and fields, we also see production buildings: a sawmill, a mill, the brickworks and limekiln at Plešivec, all making their mark in the appearance of the town landscape of Český Krumlov.

During the rule of Wilhelm of Rosenberg, the extent of the Novoměstské gardens was expanded by further purchases. The garden (in that time named as the lower garden at Nové město (New town) was connected to the castle by a system of covered passages, therefore easily accessible for the castle gentry. The garden landscaping begins to change gradually here in the spirit of the Renaissance. Even though we do not have any reports about its compositional arrangement, it is known that the garden became the site of the scientific work of one of the leading Czech natural scientists of his time - Adam Zalužanského of Zalužan. The mentioning of an orangery, probably the second oldest of central Europe, as well as the later inventory of breeded exotic plants gives evidence of the high professional level of the horticulturists working here. 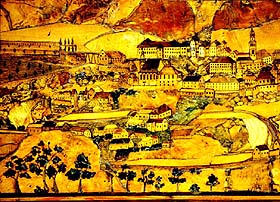 In the year 1590, on instruction of the Rosenbergs, three farmsteads and adjacent grounds opposite their new college (from the years 1586 - 1588), were bought out by the town for the Český Krumlov Jesuits, on the left banks of the Vltava in the area where today's Town Park is situated. Only one year later, the newly emerged Jesuit grounds was surrounded with a wall and made accessible from the Jesuit college by a wooden bridge over the Vltava. To the south and west the plots of the Jesuits were delimited by the surface of the cemetery with the chapel of St. Martin (at the time still wooden), a poorhouse building (reg. no. 60) and further by several homesteads near today's Linecká street. In this way, a suburbial religious summer seat was formed, which without a doubt included also the gardens. As if in the shadow of Wilhelm's building activities in Český Krumlov, the period of the rule of Petr Vok of Rosenberg stands. At the same time, however, this last Rosenberg also expressed his interest in theological and historic literature, collecting, and about nature and gardens. He divided his attention harmoniously between the town and the castle residence. In particular during his ruling in the years 1593 to 1600, a game park and in the middle of the castle pond "the garden on the island - zahrada na ostrově" emerged to the north of the castle (on today's territory of th Deer Gardens). The actual area of the proportionately small garden, on the ground plan of a regular quadrangle (a square of the approximate dimensions of 75 x 75 meters), was walled in by a circumferential wall with a gallery. The above mentioned lusthauz was obviously situated in the axis of the garden. A short description of the garden disposal of the time offers an interesting analogy with the present garden at Kratochvíle. The configuration of the grounds in the case of the Český Krumlov castle enabled a visual connection from the gardens to the north facade of the castle, where the former palace of the last Rosenbergs was situated in the place of the present Mirror Hall. From there a striking view onto the garden, stretching out underneath, unfolds. In the area of the north field in front of the fortress (resp. castle), it is necessary to further situate the game park, pheasantry, a cuttery for precious stones and a sawmill for the processing of exotic timber, also mentioned in the archive sources. Not far away, on today's 5th castle courtyard, an extraordinarily extensive palace type construction emerged at the same time. It was built by Domenico Benedetto Cometta of Eckthurn. The palace (today known as the Renaissance house), with its north-western facade with six exceptionally large niches, faced the slope with the seigniorial gardens above the castle. The ambitious construction programme of Vok was evidently a response to the foundation of the Royal Game Parks by emperor Rudolf II and gives evidence of the cultural orientation of the last Rosenbergs on the artistic circle of the imperial court of Prague.

The art of gardening at the end of the 16th century reached its peak in Český Krumlov with the Manneristic modifications of the Novoměstské gardens. In that time it was the most sophisticatedly arranged garden of all those owned by the Rosenbergs in Český Krumlov. The compositional division and appearance of the gardens can be well reconstructed according to the inventory from the turn of the 16th and 17th centuries, comprised when this garden together with the whole Český Krumlov demesne passed over to the property of the imperial court. Even though the "pens" in the Novoměstské garden, composed of variety of plants (i.e. a mixture of fruit trees, shrubs, medicinal plants and decorative flowers), still echoes of the medieval understanding of gardens, the garden as a whole is nonetheless conceived in the spirit of the Renaissance. From the collection of Renaissance type garden spaces, the Novoměstská garden can be most likely be indicated as a "giardino de semplici", a garden with a mixed utility and decorational character. It was most frequently divided by a rectangular system of paths into quadrangle beds, bordered with a low little fence. The beds themselves were planted with flowers and ornamental trees while the quadrangles were completed by arbours.