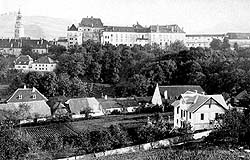 After the closing of the Schwarzenberg economic institute in 1850, its exemplary garden, which was part of Deer Garden, lost its previous function. A new seed separation facility was built in its north-western corner where the Jelenka restaurant is situated at present. A small new park with a diagonal path structure was created on the garden grounds. In the 2nd half of the 19th century we observe a general deterioration in the state of historically founded gardens. This can be seen in the simplification of structure of the castle garden and in the reduction of glasshouses in manorial gardens around 1870. Novoměstka garden was completely closed and the garden grounds were rented to private individuals. The gardens on the town's edge gradually began to vanish while newly emerging production and factory buildings were built in their place. 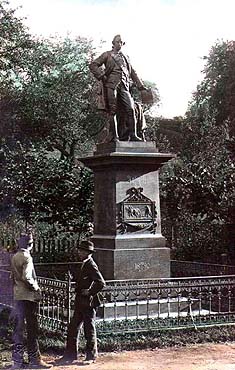 A large building housing stock beer cellars was built on the grounds of the former monastery gardens in 1867. On the ground of the Jungbaer brothers' former textile factory in the Budějovicka town district (presently under the Ambit company), the Porák brothers founded a graphite processing factory. A regulatory plan from 1896 shows that the entrance space in front of the factory was laid down as a park in historical style with a Baroque path net. There was a circular fountain at the park's centre.

Many memorials were built in Cesky Krumlov in the late 19th century and at the beginning of the 20th century. Many of these were destroyed or damaged. On 20th July 1890, a memorial to the Emperor Josef II was unveiled on the right bank of the Vltava river, near the present School of St. Agnes. The memorial is situated on one end of the bridge near a shooting range surrounded with a symmetrical garden. At the anniversary of the 50 years' reign of Franz Josef I, a memorial was unveiled in Horní brána near a road leading to Rozsyp in 1898. This memorial commemorated the braveness of the citizens of Česky Krumlov who lost their lives in the war between Prussia and Austria in 1866. A garden was made in its surroundings.

Thanks to regulatory plans developed by A. Nenninger in 1895-1896, we have a wealth of information about the late 20th century urban structure of the town and its green areas in relation to the town estate. Plans prove existence of many burgher gardens which consisted of both vegetable and decorative parts. The latter was mostly laid down in a regular historical style. 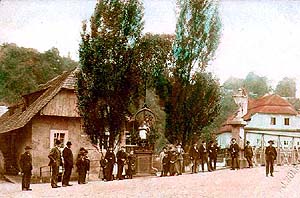 A typical feature of such a garden was a crossing of paths in which a round flowerbed or a round water reservoir was situated. The regulatory plan describes a set of those gardens near houses in Linecká street. Gardens in lower Plešivec and the Budejovické town district were designed in a similar way. At present, the only example of such burgher gardens is a wild garden near the house no. 147 at Latrán.

In 1892, the town's cemetery near the St. Martin's Chapel was moved to the edge of the town near Rozsyp. A Jewish cemetery was founded behind it in 1895. The regulatory plan explains the allotment of new cemeteries as well as a proposal of compositional structuring of the new park between the Roman-Catholic cemetery and the road leading to Rozsyp. 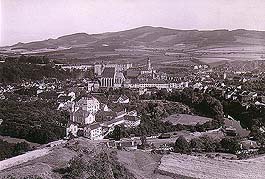 Around 1900, a playground was established between a summer swimming pool and the St. Martins's Chapel. The former Jesuit garden was opened to the public, though the garden was not yet structured. In 1907, a town park was founded here thanks to the mayor, Frank Khemeter. This newly founded park was ceremonially opened on 16th June 1907 and later tended to by a town gardener. A redesign project of the garden was worked out by a municipal construction bureau. We do not know who was the project inventor, but it is very likely a town architect named Karl Nowaczek.

The former ground of the Jesuit garden was enlarged by the ground of the former cemetery. The south-eastern part of the park was intended mainly for sport activities. In 1910, a memorial to Friedrich Ludwiga Jahn (1778 - 1852), a founder of German physical training movement, was unveiled in the northern part of the park. Sometime around 1924 - 30, the park's composition was altered. A public canteen and a visiting room for those suffering from tuberculosis was built near the St. Martin's Chapel. A wooden pavilion was built near the Jahn memorial and then the path network was changed. A main central path through which the inner path circle closes was added. The town park was given a sense of piety with the unveiling of a memorial to the victims of WWI in 1930. 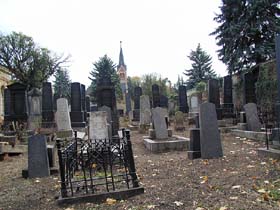