The Music was established in 1552, at the time when Wilhelm von Rosenberg returned back from his journey to Italy, took up the rule and was looking for a music band in Bohemia that could satisfy his demands. He did not want a band as its role was filled by the choir-singers and literary brotherhood in the St. Vitus church choir, but he was looking for a small instrumental group called "music" or "trombonists". 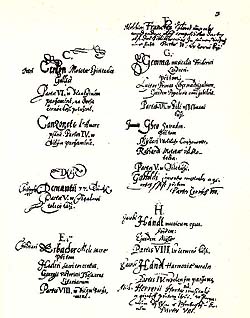 Other towns in Bohemia also had such groups - for example Prague, Prachatice or Soběslav. At the head of the music was Linhart Gruber who was appointed by Wilhelm von Rosenberg himself. Then he looked for the rest of musicians. Wilhelm von Rosenberg was fond of especially a trombonist Řehoř Schamper from Linz. He was in service from his childhood until he was old and in the sixties he was probably the head of the music. In 1564 the music had six members, around 1600 ten or twelve. From 1599 the music was headed by Jan Štolcar, called Švestka. A repertoire of the music was mostly taken from abroad. They played not only instrumental music (dancing music or improvisations) but also secular and spiritual vocal music. An inventory of a library of the Rosenbergs from the beginning of the 17th century contained about 170 printed sheet-music, mostly of German, Italian or Dutch origin. There are also many Prague sheet-music of the members of Rudolf II's music. The music was also supported by instruments. The inventory contains "many kinds of instruments" and we can find there all kinds of strings (bowed and strummed), wind instruments and keyboard instruments. The musicians had to be versatile and they had to play all kinds of instruments. Mostly young children were sent to Prague to be taught by the best instrumentalists playing at the court of Rudolf II. The main duty of the Rosenberg musicians was to play during lunch and dinner, play fanfares to the visitors and also help the literary brotherhood on the choir if it was necessary. Three times a week they had to train a new repertoire because "His Majesty complained against the musicians that they play only one piece several times over". On the other side the members of the group were free to earn extra money when they played in other bands as guests. Many years after the court of Peter Wok von Rosenberg moved to Třeboň, "Švestka together with his boys and their Italian drums and other instruments" used to come and raise a finery of the masses in Český Krumlov.