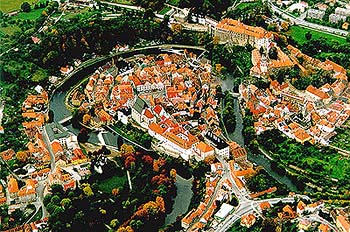 The castle and town were founded in the middle of the 13th century on two meanders of the Vltava river that closely follow each other around. The name of the town is supposed to have come from the old German term, krumme Au, denoting curved meadow. The flow of the river created a deep valley in the rocks, and the river almost curves back on itself at one point of the meander. The rocks slope steeply at an inner curve of the river near the castle as well as in the town. This cut of the river's isthmus created a very useful protective zone which was then strengthened by the construction of the Cloak Bridge and Horní Gate. The castle itself and its corresponding settlement are situated opposite the town (the end of one part of the town - Horní Gate - is situated at the same heigth as the entrance to the first courtyard of the castle, both separated by a river valley). This configuration of elevations is highlighted by a couple of local architectural giants, mainly the tower of the St. Vitus church and the castle tower. The lower part of the town is spread out across the lee side of a long southern row of the castle, the second largest castle in Bohemia (after Prague castle). The adjacent settlement called Latrán (from the Latin word latus - side) is typical for such Witigonen castles as Rožmberk nad Vltavou, Příběnice, and Dívčí Kámen, and its residences are tucked along a street (Latrán) which runs parallel to the meander of the river. 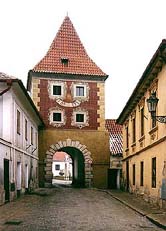 The street plan of the town centers around an oblong square and creates a rather irregular roundish orderliness which eventually connect to several routes out - Horní Gate (leading to Vyšší Brod through Přídolí), Kájovská Gate (leading to Plešivec, Kitkův Dvůr and further to Chvalšiny), and Dolní Gate over the bridge and through the Mostecká Gate to Latrán. (see History of Gates and Fortifications in Český Krumlov). Latrán was closed by the Latránská Gate (at the place where now stands a pub called U města Vídně), which was later replaced in the Renaissance period by today's only preserved gate, Budějovická Gate. In Latrán (which for some period of time held independent jurisdiction) a hospital church of St. Jošt was built near Lazebnický bridge (see St. Jošt Church in Český Krumlov) and later, in 1350, two Franciscan monasteries of Minorites and Clare nuns were founded on the opposite side (see Minorite Monastery in Český Krumlov).

The town church of St. Vitus (St. Vitus Church in Český Krumlov), situated on a slope above the river in architectural analogy to the castle's position, was rebuilt in 1439 into a three-naved hall church with a reticulated vault similar to Parléř´s conception. Before 1500 a constructional workshop of the Rosenbergs was founded, and this workshop was responsible for the reconstruction of both of the churches - in St. Vitus church a west church-gallery was built and in 1514 - 1520 a curate´s room (Horní No. 159), ending with an attic gable and stressed with a bay towards the square side. A room decorated with a profiled timbered ceiling and with unique wooden facing has been preserved inside. Profiled timbered ceilings with cut motives and profiled decking appeared in the town's middle class architecture from the 16th to 18th century not only in Český Krumlov, but in its surroundings as well as in České Budějovice and Jihlava. 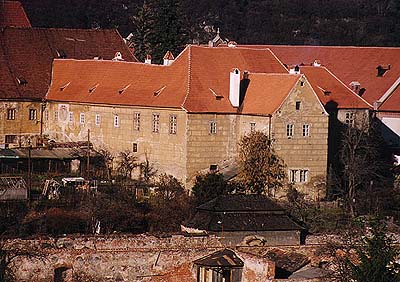 The entrance of the Renaissance style into the town meant new sgraffito fronts with ashlar tectonics and figural motives, very often with coloured illusive painting. The Italian builder Baldassare Maggi d' Arogno invited here by Wilhelm von Rosenberg, rebuilt the Gothic tower of the Little Castle with a peristylar gallery and a cooper helmet decorated with little gilded towers and banners in 1580. In 1588 he built the palace of the Jesuit college above the provost´s residence (Horní No. 154) with an inner courtyard and three frontons in the roof. 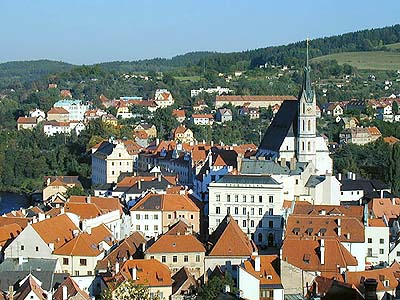 The Italian builders probably remained in the service of the estates even after the Rosenbergs died out, staying through the days of the Baroque. In 1650 the brothers Giovanni Battista and Antonio Perti built a Jesuit seminar (Horní No. 152), a Classicistic-Baroque building with two wings, characteristic of a high order, with Tuscan pilasters holding an arcade corridor. The building - today´s District Museum of National History - gives an impression of robustness within the town panorama. At that time many facades of citizens' houses were renovated with pilaster tectonics and voluted frontons, and a minorite church was also rebuilt. In 1717 the Marian column, decorated with the sculptures of the famous sculptor Matěj Václav Jäckel, was built in the square.

The end of the 18th century is known as the beginning of industrial production, and the paper manufacturer J. J. Pachner built dozens of standard living houses for workers. Full development of paper production, a spinning mill, graphite production and furniture production arrived around the 1830's. Until the end of the Baroque era, none of the architectonic styles presented themselves with more significant architecture. The small living houses as well as the villas, arriving later, were influenced very much by the taste and style of German constructional culture at the end of the 19th century. 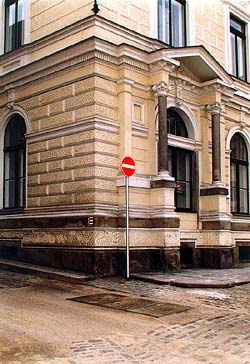 The period after World War II, especially the sixties, are characterized by their lack of expression. Pre-war ideas lost their ardour in an atmosphere of an ideological tension that was severely mediocre in comparison with the previous ages' elegance, nobility and luxury. It was a period of socialist construction that, on the other hand, provided a half-decent standard of living and public services in those critical times. When several buildings built in conservative socialist style were constructed in Český Krumlov, enormous housing complexes known as "paneláks" began to appear. The buildings were fitted together (according to a Swedish model) by panels of concrete with very poor and simple architectonics with flat roofs. These housing complexes in Český Krumlov were built in the areas of Plešivec and Domoradice, where they unfortunately occupied very exposed hills.

Very soon after the revolution in 1989, new housing facilities were built in Domoradice. 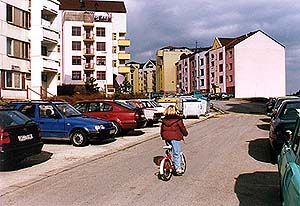 This once again created, after a very long time, an impressive closed central space with small shops and services meant for the residents. Its architectonic design is varied and draws upon traditional shapes and designs with many colours (architect Brůha, architect Skalický). Later on single buildings in a technically modern architectural style were built in Český Krumlov, linking Krumlov to the period of functionalism. A new element is the segmental shape of roofs and walls - the first such example was the corporeal building of the District Police Headquarters (architect Zdvihal), followed by the service station Ford (architect Kodeda), and the elegant glass construction of a service station Šoda (architect Rampas). In addition, the very small cultured building of the Telecom firm (architect Jiřík and architect Mls) draws attention with its variety of shapes.