Český Krumlov does not belong and has never belonged to the industrial centres in the past, and this is why the historic inner town has maintained its original medieval and early modern appearance with a minimum of reconstruction during the industrial era of the 19th and 20th centuries. The only age of interference was the demolition of the original medieval town fortification and the town gates which was associated with the development of traffic in the town. Within the town only very modest industrial enterprises with an undemanding manufacture programme based on local conditions and tradition or local raw material sources were developed. 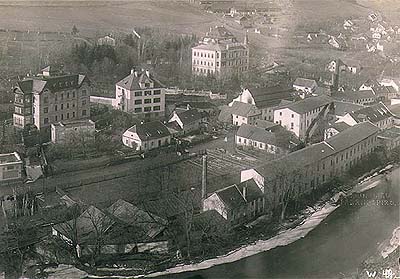 Among crafts which had a continual tradition in Český Krumlov we can find drapers followed up by the Jungbauer family possessing a plant for machine-made production of cloth. It is possible to find the beginnings of this sector in the Český Krumlov region in Zlatá Koruna where the Jungbauers founded a cloth production factory which linked up the local tradition of the Cotton Spinning Mill belonging to Antonín Bernard Joss. In 1833 Čeněk Jungbauer founded his own cloth production factory right in Český Krumlov in the New Town. The manufacturing premises consisted of several buildings with workshops, stables, a barn, sheds, granaries, warehouses and a large economic area. In the factory there were 17 machines which were operated by more than 60 employees. The existence of the factory ended on 15th July 1848 when a calamitous flush of water after a few days´ summer rains completely "carried off" all of Jungbauer´s factory and there was no capital for its restoration. Later in the area of the former cloth factory the Porák Brothers founded a graphite preparation house.

The other small cloth factory in Český Krumlov was an enterprise founded in the 1860's and belonging to František Wozelka located in a building on the embankment of the Vltava river below the church at the bridge at the end of Kájovská Street (Kájovská No. 58). Wozelka was quite a well-known cloth supplier for the Austria-Hungarian army. It is stated that the cloth woven there was used for sewing the Schwarzenberg Guard grenadiers´ uniforms. When after the Great War - and after 1938 - those outlet possibilities lapsed, the factory was discontinued. The factory possessed 13 flyer frames with 450 spindles in the period of its beginning. The set drove the water wheel which was 19 feet in diameter (5.9 m) and 6 feet in width (1.8 m); its output was 10 HP. 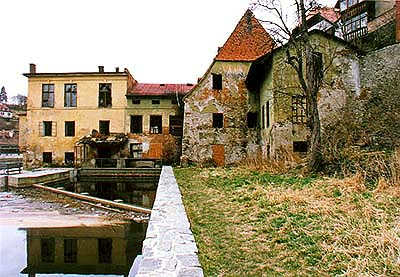 Probably the most wide-spread industrial plant grown in the surroundings of Český Krumlov was flax; that is why another textile factory, the Flax and Hemp Spinning Mill belonging to Josef Rudolf Schindler, came into existence in Spolí near Český Krumlov in 1840. In 1842 the construction of the factory was finished and it provided a hundred people with employment for whom a workmen´s house with a factory canteen were built up. As early as 1851 the enterprise employed 170 people. At the beginning of the 20th century the factory was extended by a hemp spinning mill and it provided more than 400 people with job opportunities.

The border and frame production has had over one hundred years´ tradition in the town as two gilding frame factories operated there. The first of them, founded in late 1860, was Schönbauer´s workshop which at first specialised in gilding work and later it extended its business sector by painting frame production. A separated building for this operation was built up by Schönbauer at the outskirts of the town in 1881. The second factory belonging to F. Knecht was at the Tavírna suburb and was in operation between 1878 and 1893. The products of those factories were much-sought-for goods and a part of them was exported into many countries, particularly into the Middle East. Julius Tschunko, the hitherto firm´s partner, took a complete possession of the U Trojice enterprise and the factory remained in the possession of his family till the end of World War II.

It is possible to find very interesting enterprising activity there: two Photographic Studios - belonging to Josef Seidl and Josef Wolf - which were engaged in not only made-to-order production of portraits but mainly in tourist picture postcards production which rendered the beauties of the town and all the Šumava mountains. (History of Photography in Český Krumlov).