History of Guilds and Crafts in Český Krumlov

The oldest rules used by nobility to establish guilds in towns come from the 1st half of the 15th century, i.e. from the Rosenberg era. The increasing number of craftsmen and crafts had reached such a level that an urgent need of united organization and administration arrived. Guild rules provided the guilds and craftsmen with protection against unwanted competition from foreign masters and illegal producers. There was a so-called mile law that guaranteed a one mile circle around the town which was free of foreign trade. Nevertheless, town 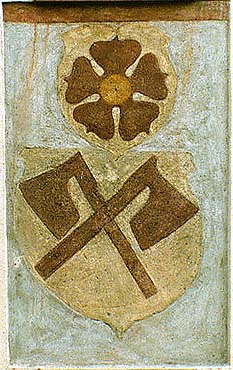 guilds accepted members coming from other neighboring localities where the guilds did not exist. This was a good way for them to protect themselves against undesirable competition and to gain more fees from new members. We can mention the weavers from the small village of Přídolí that had their authority enlarged by their superior guild in Český Krumlov in 1684 and then, in 1688, started to protest against the separate guild establishment in Přídolí. From 1707, the hatters from Vimperk and Drslavice demesne belonged to the hatter´s guild in Český Krumlov, followed its orders and therefore were able to attend the fairs and weekly markets in Husinec. Craftsmen from Český Krumlov sought for some new outlets as well. In 1729, the tanner´s and shoemakers´ guild from Chvalšiny complained about the craftsmen from Český Krumlov and Horní Planá which had supposedly broken the mile law and offered their goods in Kriš. Eventually, they made an agreement that two craftsmen from Český Krumlov and Horní Planá would go to the St. Thomas fair and Eastern Sunday fair in Ktiš, and two craftsmen from Chvalšiny would attend the fairs in Světlík and Zátoň. Competition often apeared even among single crafts. Butchers were trying to solve disputes on house slaughter permissions which harmed those united in the guild; butchers and tanners argued with shoemakers about leather sales. Bakers fought with groaters about illegal baking and sale of bread. Tailors had similar troubles with furriers and cloth cutters who stole the work belonging just to tailors and therefore deprived them of their earnings. 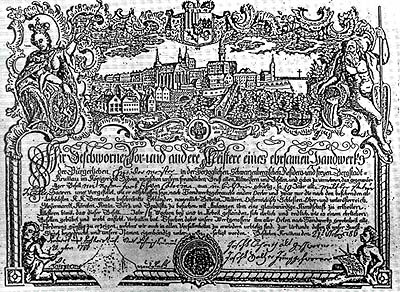 Organizational guild structure was arranged by special rules - a head of a guild was elected for a one-year term; the guild set up conditions for accepting newcomers, determined the number of years obligatory for each journeyman to spend at different towns or abroad, regulated the number of apprentices and journeymen (i.e. tailor's guild was rejecting the idea of accepting both new apprentices and masters in the 18th century, since there had been so many tailors in town and therefore not enough work for all of them), awarded masterships, and, other than that, it cared for senior or crippled craftsmen. The Rosenbergs supported guild establishments in town and provided the craftsmen with better conditions to carry on their jobs. Consequently they supported both the development of their residence town and the better lifestyle of its inhabitants. The advantages and protection provided were of course charged from a part of the craftsmen's incomes.

The historical center of Český Krumlov now may serve as a living reminder of the dexterity and skillfulness of the local craftsmen.