The current garden design of the left bank of the Vltava River, directly connected to the Old town settlement in Český Krumlov in the Town Park area is a result of continuos development lasting for centuries. A new town cemetery at the St. Martin chapel and summer Jesuit residence began construction on originally free, agriculturally cultivated area at the end of the 16th century. The Jesuit garden, founded after 1662, is the first ornamental garden in the territory of the town of Český Krumlov and was re-founded after the end of the Thirty Years War (the new court garden, i.e. today's castle garden was constructed just after 1678).

More precise maps giving detailed information about the appearance and zoning of the Jesuit garden date back to the beginning of the 19th century (i.e. after dissolution of the Jesuit order). Nevertheless they give identical information as older iconographic sources dated to the 17th and 18th centuries. The garden located in front of the eastern wing of the residence in distance of 10 - 15 meters had a irregular elongated rectangular shape with dimensions approximately 65 by 45 meters. This fact is documented by either a map of the stabile cadaster dated back to the 1820's (1826) and a later cadastral map 1:1 000 surveyed around 1895. The distance between the actual garden area and the residence garden forefront was determined by the existence of the accessing road from the north (from the area of Linecká street) to the eastern entry to the building. The garden was axially related to the entry, and the axis divided the garden into two roughly symmetrical parts. 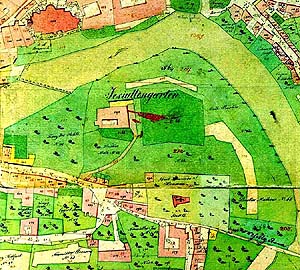 In contemplation of the inside garden area zoning we have to rely on old veduttes of Český Krumlov. A vedutte dated back to 1819 and an older votive picture of the town of Český Krumlov under protection of St. František Saleský show a chess-board layout of the garden area. The above mentioned hypothesis is also based on research of gardens of Český Krumlov. Zoning into square basic areas by one main axis and several cross-axes is likely to have been used in the Novoměstská garden, several decades older. 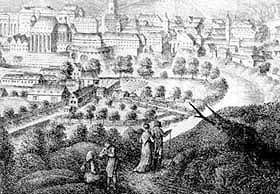 While we have at least some information about the compositional zoning of the garden's individual parts we do not know much about the style concept of the garden. So far, knowledge of the appearance of gardens in Český Krumlov region from other periods lead to the idea that the Jesuit garden from the end of the 17th century was still Manneristic in style. The fact that the garden was probably not surrounded by a wall at the time it was founded shows that architecture of constructional elements (walls, gates etc.) did not play a significant role in the garden composition. The garden was not strictly functionally defined by its surrounding and was perhaps not designed for contemplation and reflection, as were for instance the viridaria (greenhouses) and heavenly yards of medieval monastery gardens. In addition to its aesthetic function, it was probably partly a utility garden, used for growing fruits and vegetables. After dissolution of the Jesuit order in 1773 and reconstruction of the former residence for housing purposes, the former Jesuit garden became mainly a utility garden.

A vedutte of the town dated to 1819 gives us information on the appearance of the eastern part of the garden. In spite of its rather schematic presentation it is obvious that the garden was zoned by mutually perpendicular paths into square fields. There are shrub rows drawn along the garden periphery. Graphic presentation of the square field fillings (parallel hatching) shows that at the beginning of the 19th century the garden was of utility type. The indication sketch of Stabile cadaster (by Josef Langweil) is dated approximately to that same period. The garden at the former Jesuit residence is still called "Jesuit garden" on this map. Gardens and an orchard surround the house no. 55 and the area of the former Jesuit garden. The cemetery at St. Martin chapel, still in use then, was located in the north part. The map shows even smaller areas of fields along the Vltava riverside. 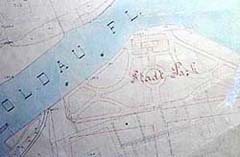 A photograph from Josef Seidel shows the territory of the third Vltava meander from the hillside of the Cross-hill in 1902 - several years before founding the town park. The area layout corresponds to the cadastral map from 1895. On the photograph the former Jesuit garden's northern bounds are demarcated by a wall but no other segments from the garden wall are visible. The area of St. Martin cemetery (liquidated in 1892) is still surrounded by walls. There are full-grown trees visible and the graves with gravestones were not removed yet. There is an uninterrupted strip of grassfields between the Jesuit garden and the cemetery on one side and the shore-vegetation along the Vltava river on the other. The photograph also shows the town swimming pool.

A playground was located between the swimming pool and the cemetery.
Only at the turn of the 19th and 20th century did a change finally occur.