History of Railway Transportation in the Český Krumlov Region 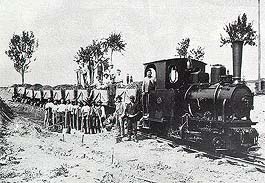 The 19th century was a period of unique development of the economy which was closely connected to the construction of railways. The establishment of new means of transport met with many problems. The construction of the railway brought unusual activity into the normally peaceful life of the provincial towns and countryside and significantly influenced the life of the residents. It brought great changes into the way of travelling, and shortened the distance by an unusual way. The railway could, thanks to its speed and cheap form of travelling compete with the normal way of travel in those days, carrier's, postal and a lengthy form of stage-coach travel. It was realised by the drivers, coachmen, tradesmen, workmen, inn-keepers and other people, who depended on the transport trade with their livelihoods. They were afraid of the loss of earnings and very soon their protests appeared against the new modern way of transport.

From the beginning most of the towns realised the possibility of faster development of industry and business development, and the possibility of other economical advantages, which were brought by the railway. Great competition started between individual towns for the possibility of joining with the railway link, with the consequence of delays or cancellation of projects for the building of railway. But none of the obstacles were big enough to suppress the new invention of technical revolution, which brought great advantages to its users. Among them were faster speed in the rail transport, accuracy, safety, a cheaper form of travel, and easier ways of trading with foreign countries, easier ways of transporting goods from the manufacturer to the consumer, a bigger possibility to even out the prices and wages, and freeing the industry from the tie of natural resources near at hand, as they could be easily and cheaply transported over a greater distance.

The first steam railway in the Czech lands "Severní Dráha of emperor Ferdinand" (Northern Railway) went with its track from Vienna through Brno and Olomouc to Praha, in 1845, it bypassed South Bohemia all together. The expected connection to the railway to West Bohemia came next, where the "Czech Western Railways" company started to build a track from Brod nad Lesy towards Praha, and its first section from Brod to Plzeň was completed in 1861, and a year later trains were running on the second part of the railway from Plzeň to Praha. During that time, work on the connection between Plzeň - České Budějovice had already begun, which formed a part of the "Railway of emperor František Josef". The ultimate goal of the project was to connect by rail the capital city of the monarchy Vienna with the famous spas of Karlovy Vary and Marianské Lázně. The first train on the track between Plzeň - České Budějovice went on September 1, 1868.

The wave of construction of the steam railways, touched the industrially poor region of South Bohemia with a certain delay. The service on the railway between České Budějovice - Český Krumlov - Kájov - Želnava started in 1892. The necessity of the Želnava railway came from the need for a better quality connection between the wide spread estates of the aristocratic family of the Schwarzenbergs, for the transportation of graphite from the mines in Černá v Pošumaví, timber and cheap peat from the forests of Šumava. From October 15, 1893 the track came into operation between Strakonice - Volyně - Vimperk, and the railway lines from Číčenice - Vodňany - Prachatice and Prachatice - Volary. From here connection was made across Lenora to Vimperk July 9, 1900, which mastered the main mountain ridge on Kubova Huť, 1,000 meters above sea level. Only in 1910 was the track extended from Volary across Černý Kříž to the Bavarian border town of Heidmühle. In 1911 the second electric railway came into operation in South Bohemia, which connected Rybník and Lipno (Electric Railway Rybník - Lipno). The railway network after 1911 was not extended after that time. 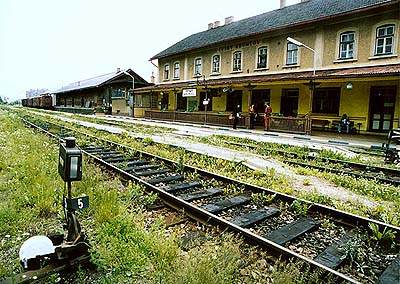 Original projects for the railway from České Budějovice to Černá v Pošumaví avoided by a great arch the town of Český Krumlov. Thanks to the interference of duke Johann Adolf II. zu Schwarzenberg, all the original projects were altered and on December 11, 1883 a legislation was accepted to build the "Českomoravská transversal railway", a part of which was supposed to be a line from České Budějovice to Želnava. An Austrian railway company was given the contract on August 7, 1884 to build the railway, but delayed the start of the building for a long time due to lack of profitability. Duke Schwarzenberg and representatives of the towns and villages had to continually urge the start of the building. At last the building began on August 28, 1890, with a festive excavation on the place of today's railway station of Český Krumlov. The contractor for the supply of the "local railway" was a company from Praha, Schön & Wessely. The central building office was based in the manor house of the production centre of Adolfov (part of the village of Holubov).

During the building process certain problems occurred with the viaduct in Dobrkovice, also the construction of the bridge across the deep valley of the Křemže stream. The first section of the line was completed within 15 months and led from České Budějovice to Kájov. Already on November 19, 1891 the first train could leave, it had nine carriages. The journey started in České Budějovice and reached Český Krumlov by 16:30. The journey lasted something over two hours. From the 20th of November of the same year, a regular daily service started on the track, which was operated by three steam trains. The following year the railway was extended from Kájov to Želnava. New stations gradually arose along the railway line. In 1894 a new stop of Domoradice was opened. The liking for Sunday trips to the surrounding countryside of České Budějovice led after the first world war to the opening of stations in Vrábče and Černý Dub. The development of passenger transport continued in 1921, by the opening of the train station in Plešovice. The train station of Adolfov was closed in 1922 for freight transport and in 1923 was renamed Holubov. The stop of Třísov was opened in 1935. The station near České Budějovice lived to see several changes in name; originally České Budějovice - Linecké Předměstí (Suburb), afterwards České Budějovice - Town Brewery, and only the name of České Budějovice - Southern Station survives to this day. 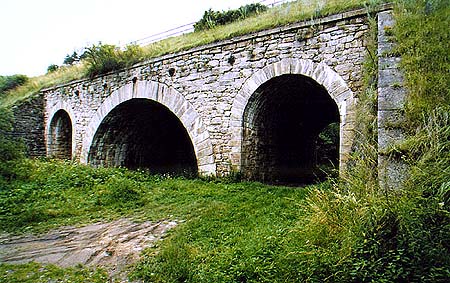 The Kájov railway saw most of the traffic during the building of the fortification of the border region in 1937 and after the proclamation of mobilisation on September 24, 1938.

During the "protectorate" the railway became a witness to removal of Czech population inland. The border region crossing at that time was Zlatá Koruna. During the whole of the war, the Kájov railway was used by the German army. At the end of the second world war, transferred German civilians were transported over this railway. The same railway was used by new farmers and settlers in to the border region, but also by the "gold diggers". The demolition of villages, churches and other historical monuments, which reminded of the past, followed, but the life around the railway was not halted even by these tragic events. Along side the railway new sidings were built - "Kamenolom Plešovice", "Juta Domoradice" or "Paper Mill of Větřní" originally called "Pečkovský Mlýn". The railway transport still did not have a competitor. Only in 1989 small decline in the railway transport occurred, which was caused by gas installation of the Jihočeské papírny a.s. Větřní (South Bohemian Paper Mill), the privatisation of the West Bohemian stone quarries of Plešovice and Jitka Domoradice, which reflects on gradual reduction in the amount of goods transported on railway by two thirds.

What was mainly a freight railway changed into a popular seasonal track with a strong tourist activity, which concentrated on the stations near the Lipno lake, to stations in Český Krumlov, and Holubov, which is the exit point for the climb to Kleť mountain. The tourist trade during the summer season started to develop gradually even in the station of Zlatá Koruna, thanks to the close proximity of the monastery and water harbour. Section of the railway from the town of Český Krumlov to the Lipno dam, then across Černý Kříž and under the mass of Třístoličník to Volary, leads through the most beautiful country side of Šumava and belongs among the most picturesque in the Czech lands. Instead of carriages laden with timber, graphite and peat, the trains transport into the Šumava forests every year bicycles, boats and thousands of country and nature lovers. On some stations the original buildings still remain, which create a splash of colour of the "Šumava local railways".