New Town (Novoměstská) Garden during the reign of the Rožmberks 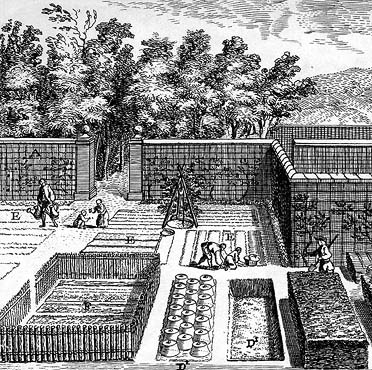 Except the list of species, the inventory contains records about the inner division of the garden area into the five departments ("preserves") and a greenhouse mentioned there as an "orange mine". Their detailed description is a unique historical source that, among other things, proves the attention the last Rožmberks paid to the garden. The list of the species grown there is extraordinary long.

In the greenhouse grew the above mentioned orange, lemon, and fig-trees, but also laurels, kdoulone, cypresses, roses and other plants. In the front preserve, which was lined with the box-tree live fences, grew mispule, cherry, peach, plum and French plum-trees. As for the bushes there grew gueslder rose, herbs like mint-balm, sage, mint, fox-glove, and lavender. There were also various flowers: violets, peony, daisies, daffodils, lilies, snapdragon, golden lily, carnations, larkspur, royal yarrow and columbine. The second preserve was also planted with a similar mix of trees and flowers. A maze made the third preserve. There grew mirabelle, apricots, plums, cherries and sour cherries. Roses and royal brushwood grew as decorative plants there. Lavender and yallow represented the aromatic plants. Some vegetables were also grown there - cabbage and parsley. The fence and perhaps the maze walls were made of box-trees. In the forth preserve with a box-tree walls there were plum-trees, French plum-trees, sour cherry and cherry-trees, flowers, herbs and also some kinds of vegetables, for example cucumbers, cabbage and beets. This was followed by a birdhouse (foglhauz), in which cranes, turtle-doves, blackbirds, fieldfares, and many other kinds of birds were kept. Around the aviary grew roses, bushes of currants, cabbage and strawberries. A fountain in which the trouts were kept was situated nearby. The fifth preserve, the so-called kitchen garden, was used for growing vegetables: e.g. artichokes, cucumbers, cabbage, strawberries, zucchini, asparagus, sage, green peas, red beets, radish, chicory, spinach and cauliflower. Some fruit trees were also planted there - cherry, sour cherry, plum and French plum trees.

Urban development of the location:
The flat meadow around the River Vltava, threatened by floods, had been used as a temporary settlement since the Old Ages - see e.g. the foundings of the Slav midground settlement (polozemnice) from the 8th century ( Archaeological findings in the Brewery garden). The New Town garden was later on, in the 16th century, founded on an area which probably had not been a part of the Latrán outer bailey settlement, surrounded by a city wall. The change of the urban situation was caused by the extensive foundation of the Clarissian and Minorite monasterie ( Latrán No. 50). The contrast in the Latrán ground plan between "organically" grounded outer bailey settlement, which was concentrated along the only communicative axis in arches and a one-time founded monastery place, typical for its usage of classical principles for the creation of the monastery buildings set has been visible until today. The New Town was founded between 1347 and 1374; the name itself was first used in the middle of the 15th century. From the very beginning, the New Town development was influenced by the earlier founded monasteries - houses and streets were created around its circumference and the new buildings were not as compact as in the neighbouring Latran. It is probable that there were dispersed settlements, gardens and hatcheries in the place of later New Town Gardens. Originally, there was a row of houses in the place of today's brewery. In 1462 the Rožmberks bought a court with a garden there, which became the basis for the later mansion ( Latran No. 27). In the years 1546 - 1559 this mansion was expanded and rebuilt into an imposing widow's residence with a garden belonging to Anna of Roggendorf. The garden gained its today's area by gradual buying of townsmen's land, however, there are no clear news about its form in the time of Mrs. Anna (she died in 1562). The New Town Garden reached its peak later on during the reign of her sons Wilhelm of Rožmberk and especially Peter Vok of Rožmberk, who in the middle of the 1590's initiated an important modification of the New Town Garden.

Historical and architectural development of the New Town Garden during the the reign of the Rožberks:
We do not have any further news about the oldest phase of the garden's development associated with Anna Roggendorf's stay in the neighbouring mansion. At that time, the garden probably had a late middle-age character of a town garden, where the useful areas were freely mixed with decorative plants. In the time of the reign of Wilhelm of Rožmberk and especially of Peter Vok, the garden changed into a very precious Renaissance garden. Much bigger attention was probably paid to equipping the New Town Garden than the gardens above the castle and the garden in the isle in the castle's pond. It was called the "lower garden in the New Town" in order to discriminate it from these other gardens. 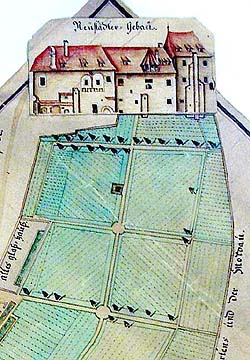 The garden was connected to the castle by a covered corridor system, so the accessibility for the nobility was easily accessible. The modifications initiated by Peter Vok after the year of 1594 brought a spirit of mannerism to Cesky Krumlov. The authors of the modification concept are not known. It is possible that it was inspired by a contemporary Empirical garden in Brandys nad Labem or the Royal preserve in Prague Bubenec. We suppose that Domenico Benedetto Cometa, who worked for Peter Vok in Český Krumlov at that time, participated in the garden works. The orangery, the second oldest in Bohemia and in the Central Europe, is mentioned in the year of 1600. Towards the end of the 16th century the New Town Garden was well known for an amount of plant species (including the exotic ones) grown there. The orangery in the lower garden was the second oldest orangery in Bohemia. This fact illustrates the interest the Rožmberks had in gardens and in nature sciences generally. The 1602 inventory of this garden is the most valuable source for getting to know the form of the so-called lower garden in the Rožmberk time. Although the Czech king (and Emperor) Rudolf II possessed the garden and the whole manorial estate at the time the inventory was made, it nevertheless illustrates the likeness of the Rožmberks' garden - almost nothing important was done in the garden in one year of Emperor's administration. The "low garden in the New Town" inventory from 1602 introduces us to the Rožmberk garden in its most valuable developmental phase, when the garden architecture was already influenced by a spirit of the late Renaissance and mannerism. According to the inventory, the New Town Garden contained the elements typical for the Renaissance gardens as area fencing by a boundary wall, arranged into regular parts bordered by box-tree fences. There was a maze, aviary and a stone water tank there. The greenhouse (the so-called fighouse or also orangery) and other garden constructions were situated by the northern wall of the garden. The inventory also contains a simple operational garden plan. The front garden, the second garden, a maze, the fourth garden, the birdhouse with a water tank and the kitchen garden followed from the mansion in this gradual order. The irregular shape of the land complicated the building of a strictly geometrical and axis-connected path system and caused the formal shortnesses of the New Town Garden. The garden plans from the later times (from the 18th century) still prove the rough area outline and the placement of some garden constructions.

The 1764 garden plan contains a geometrical outline of the kitchen garden, which corresponds with the garden description in the 1602 inventory. The above mentioned first, second, third and fourth "preserve" probably correspond to four bosquets, which the 1764 plan places in front of the mansion: 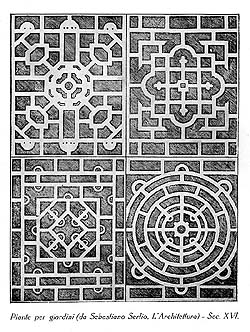 It is hard to determine from the archive records whether the kitchen garden reached all the way to the New Town Garden western wall or if the Rožmberk garden ended at the level of the court gardener's house ( Latran No. 26)

The rich structure of the preserves in the New Town Garden - a mixture of fruit trees, bushes, herbs and decorative plants - witnesses the last marks of the middle-age garden conceptions. In the group of Renaissance types of garden areas, the New Town Garden can be perhaps best marked as "giardino de simplici", a garden with a mixed useful and decorative character. It was frequently divided by a rectangular path system into the four square beds, lined with a low box-tree fence. The beds themselves were planted with flowers and decorative trees, the squares were complied with the arbours.

Analysing the New Town Garden composed structure and the archive sources concerning its form, we find that one fundamental element of Renaissance gardens - a parter - was missing, at least in its intact form. A parter was usually located under the windows of the garden front-side of the palace construction. It was made of square fields of the same size, lined with the box-tree fences, separated by the paths of the same width. The inner area of the individual fields was filled with a symetrically composed ornament from the low-cut box-tree fences. The square fields were less frequently composed of geometrically shaped beds, planted with aromatic plants and herbs, vegetables and flowers. The 16th century beds are typical for a striking limitation of elements used for the creation of inner bed decoration of belts and ribbons. The usual architectural motives of arabesque and grotesque of that time were not applied to the bed-forms. The New Town Garden maze was probably planted with box-tree fences. However, the inventory mentions also the fruit trees, bushes, herbs and even vegetables. It was not probably a clean type of maze but rather its variation created in (from the point of view of the garden creation level) in a somewhat provincial surrounding. Although the Cesky Krumlov New Town Garden did not reach the formal and especially composical refinement of the Prague Royal Garden, it can be considered as one of the most valuable municipal palace gardens of its time in the Czech lands.