Architectural-historic development:
The era when the New Town Garden, together with the Český Krumlov Castle was the property of the imperial chamber (until 1622) did not bring much in the way of innovation in respect to its art-historical development. The concept completed under Petr Vok of Rožmberk was respected. Documented modifications performed in the garden were more maintenance and repairs of the existing garden facilities. Based on the reports, there is an evident deterioration of the professionality and quality of the gardening works. 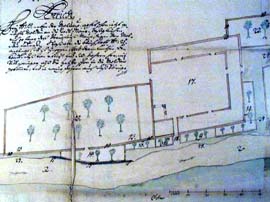 In the years after the imperial chamber had taken over the Český Krumlov Castle the garden likely suffered from lack of proper care. The richness of the inventory dated to 25th August 1602 is rather contrasting with the report of the new gardener, M. Vobr, that the garden is devastated. It seems in winter 1602-1603 the garden lacked professional management. In the following years the situation slightly improved, and garden constructions were evidently maintained as well. Constructions raised as early as under the Rožmberks ("lusthauz with gardening tools", orangery, entrance gate, "foglhauz", stone fountain) are described in the inventories. The above mentioned report dated to 1613 affirms the likelihood of growing some tree vegetation (vine not getting ripe, pomegranate not giving fruits etc.). At that time the garden was used especially for growing vegetables for the castle kitchen. The new owners, the princes of Eggenberg, used The New Town Garden as their court garden. Little garden constructions with origins reaching back to the Rožmberk era gradually ceased to exist. The bird-house and stone fountain disappeared. The produce garden and greenhouse plants began to flourish again. There are no reports showing any significant modifications of The New Town Garden under the era of the first two princes of Eggenberg (Johann Ulrich - 1622 to 1634 and Jan Antonín 1634 to 1649). A change not only for this garden but for the whole castle residence of Český Krumlov (of which the garden was part) came with the reign of the prince Jan Kristián of Eggenberg (1641 - 1710) in 1664. In the same year, not far from the garden, the old Rožmberk granary ( Latrán no. 33) was rebuilt by constructors - P. Spinett a C. Casal - into a tennis court, as an image of "reviving the ancient desire for physical beauty and fitness". In 1666 the prince married Marie Ernestina of Schwarzenberg (1649 - 1719). Even though they lived mostly in Vienna in the first years, the princess had an artificial cave - grotto built in the garden in 1668.

The oldest known illustration of the area of The New Town Garden is on the vedutte of Český Krumlov made by combined techniques (wood, paper, straw, glued together in a collage) between 1665-1670. At that time the still-manneristic garden is illustrated on the vedutte as an area demarcated by enclosure walls between the former residence - the manor house of Anna of Roggendorf ( Latrán no. 27) in the east and the court gardener's house (Latrán č. p. 26 Nové Město) in the west. There is a cupola-roofed building illustrated approximately on the main garden axis nearer to the manor house - perhaps lusthauz created by rebuilding the former bird-house. There are other buildings (orangery, grotto, lusthauz) documented at that period, as well as an evidence of tree vegetation missing on the vedutte. It seems that the area of the garden is segmented into even flower-beds. The wall of the riverside garden (so called Anniwarter garden) was damaged - the vedutte documents its temporary repair by a pile palisade.

In the early 1670's the princely couple began to increasingly extend their stay in Český Krumlov castle. They had been reconstructing the castle since 1673. The intention of the princely couple - Jan Kristián of Eggenberg and Marie Ernestina of Schwarzenberg - to found today's castle garden on the uphill to the west of the castle residence signified a turn in the development of the New Town Garden. This "new court garden" (as it was initially called) was founded between 1678 and 1683. For a certain period both gardens were used as court (in the meaning of ornamental) gardens simultaneously. As the new court garden above the castle was reaching its completion, the antecedent garden remained unused. The New Town Garden began to lose the nature of an ornamental "court" garden. It became permanently a utility garden. Nevertheless, even in this time the garden was used for intense cultivation gardening activities, including keeping several greenhouses and hotbeds.