Location:
The Town Park is located close to the historical centre of Český Krumlov Municipal Reservation, in the suburb of Plešivec at the "third meander" of the Vltava river. The park area is demarcated by the left bank of the Vltava from the east and north, by the rear sections of building no. 55 (Hotel Gold) and houses in Linecká street from the west. The southern bounds of the park are created by an original wall leading to the Vltava bank. 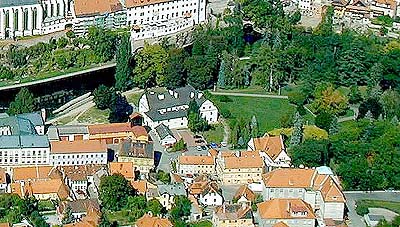 Description of the present park appearance:
The Town Park consists of the following areas: 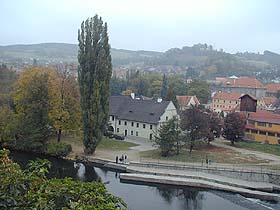 The following buildings are located on the territory of the Town Park:

The tree vegetation in the area of the former cemetery at St. Martin chapel is compact and connected and without any larger free areas. The original path system 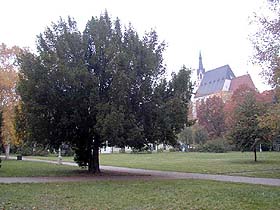 (paths were sanded and metalled in sloping sections) from the time of the original park has practically disappeared. The sport area is edged by a line shore-vegetation of the riverbank. It is bounded by column-shape oak alley from the south. The Northern part of the Town Park is created by a free design around house no. 55 (former Jesuit residence). A large grassfield with high-grade solitary trees on the periphery shapes the central space of the whole park. The park vegetation cover in the north and east is comprised by alleys of červenolistý javor and fly-in shore-vegetation.

Level of conservation:
The Town Park is located in a preserved zone of MPR Český Krumlov. The former Jesuit residence no. 55 and the area of the Town park including the pavillion and St. Martin chapel are both independently preserved as separate historical monuments. For its dendrological and historical value, as well as its important position within the context of the townscape of Český Krumlov, the Town Park has been declared a significant landscape element.

The role of the Town park in the municipal planning structure of the town of Český Krumlov:
The current appearance of this part of the third Vltava river meander is a result of the long development of medieval suburb settlement called Plešivec. While the area of two Krumlov urbanisation nuclei (especially of the Old town and to a lesser extent the premise of Latrán and Nové město) was built up as an urban area within a relatively short time, in this part of Plešivec suburb a high percentage of non-built-up space was typical during its whole historical development. Even today the natural elements (stream, shore-vegetation, tree- and shrub-groups, grassfields) complete the character of this part of Plešivec - in contrast to the neighbouring densely built area of the Old town, which are without any green areas at all (these were allowed to exist almost exclusively outside the enclosed medieval area - along the Vltava riverside and on slopes not unsuitable for construction). Deep penetration of a natural element into the town planning structure originates in the dominant Cross hill (see Cross hill chapel in Český Krumlov), from which it descends through housing estates to Vltava river meander and stops at the southern rocky slope of a church acropolis with St. Vitus church in Horní street. From a historical point of view, this area is valuable by the plain fact that it did not suffer from regulation outlined in regulation plans of A. Nenning dated back to the end of the 19th century. A relative unheedance of later regulations and sanitations of the area is typical for the town planning structure of this part of Plešivec. The territory of the Town Park next to the historical centre of the Český Krumlov municipal historical reservation is the largest green area accessible for the public in Plešivec suburb.

Present function of the park:
All year round the park is intensively used for relaxing, especially by mothers with little children and youngsters. The playground inside the park is used by the near-by elementary school in Linecká street.