Town park of Český Krumlov - historical development of the area

The locality of the Town Park of Český Krumlov (the area of the third Vltava river meander) went through different town planning development from the neighbouring Staré město (Old town) and Latrán. Because of its distance from the crystallising centre of the conurbation (Český Krumlov fort) any compact urban corridor street built-up area had not raised here for long time. Town planning structure of the third meander area has been significantly influenced by the great deal of areas used for agriculture and later also for gardening. Only since 15th century scattered homesteads and farm buildings of Český Krumlov burgesses have started to raise between cultivated lots, gardens and grass-fields and originally cultivated landscape has gradually transformed into a regular suburban settlement. Even though the big number of non-built-up lots was typical during the whole historical development of the settlement in this location. 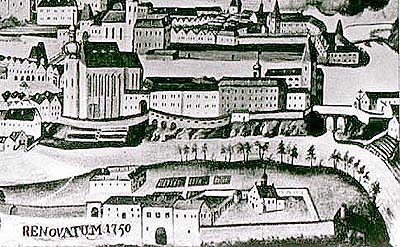 Because of the confined interior of the medieval Staré město (Old town) at the end of the 16th century the parish cemetery was moved from the St. Vitus church to the area surrounding today's St. Martin chapel. After 1590 newly founded Jesuit premises on the left Vltava riverside were walled and in 1591 made accessible from the Jesuit college through a wooden bridge across the Vltava river. From south and west the Jesuit lots were bounded by the area of cemetery with the then wooden St. Martin chapel, the poorhouse (Plešivec no. 60) and few homesteads in today's Linecká street. In about quarter of e century after the end of the thirty-year war (1662) Český Krumlov Jesuits started the construction of a summer residence. From the very beginning the four-wing residence (no. 55) was decorated with an ornamental garden. The garden should also be used from plagued people to rest. Fenced by walls premises have been also flood-protected by newly built levees since 1663. 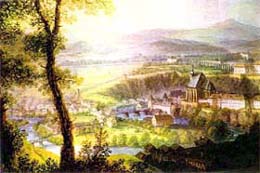 After dissolving the Jesuit order in 1773 the Jesuit College has been used as barracks (the wooden bridge across Vltava river has been removed). The cemetery at St. Martin was walled in the same year. Johann Pinsker, a rich burgess, bought the whole of garden area together with the summer residence in 1779. He was continuously selling out parts from the garden and garden houses. St. Elizabeth Hospital (1782-1783) and neighbouring houses no. 58 and 57 arose in their place on the edge of the today's town park area. The garden itself has became public and had been called by its original name "Jesuit garden" (in German Jesuitengarten) until foundation of the Town Park in 1907. In 1892 the cemetery was liquidated and a new roman-catholic cemetery was founded in Horní brána (Upper gate) suburb. Around 1900 a playground was made between the swimming pool and the chapel and the former Jesuit garden premises were open to public, in spite of disadvantages of their original design. The Town Park was founded only in 1907, thanks to the mayor Frank Khemeter´s efforts.