The period of the Second World War put an end to the centuries-long fruitful, albeit occassionally rocky co-existence of Germans and Czechs in the border regions of Czechoslovakia including Český Krumlov. Unfortunately this also manifested itself in the state of the municipal and private greens, parks and gardens. Mostly this concerned commemorative objects with German texts or monuments remembering important personalities of German origin. Such structures were either damaged or demolished. This was partially due to the fact that the same thing happened during the war from the Germans towards the Czechs (for instance the removal of the commemorative plaque of the Czech Jesuit Jiří Bílek of Bílenberk from the prelature in the year 1938). Commemorative objects were also damaged in the municipal park and in the park at the cemetery.

The following 50 year period left its insensitive mark particularly on the appearance of the Deer Gardens due to the construction of a concrete swimming pool (resp. a fire reservoir), and later by the building of a bus station including waiting room buildings on the surface of the former botanical garden. The old prelate garden perished during the construction of a bypass communication road in the sixties. 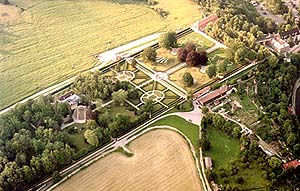 Its Baroque arbour was demolished, and its south-eastern part was separated from the garden area for the purposes of the new road. The rest of the original garden was turned into a small park with a view on the Town Park.At the end of the sixties, the reconstruction of the castle garden began according to a project of ing. Ivo Hofman, the intense execution of which caused a strong conflict of opinion among the Český Krumlov citizens. The intensive reconstruction works were finished in the beginning of the eighties with the unclear future of the revolving auditorium in front of the Summerhouse Bellarie. While the suburbs of Český Krumlov saw the emergence of vast new apartment complexes with newly founded public green areas, the historically based collection of gardens and parks mainly situated in the historical centre of the town gradually dilapidated. Some gardens were developed as suitable building areas or used in some other utilitarian way. With the construction of panel houses at lower Plešivec and at Špičák, entire historical suburban areas, including gardens, disappeared without a trace. During the forty years after WWII more than one hundred historical houses were destroyed in the Český Krumlov suburbs, often historically very valuable. The demolitions tended to be executed without any documentation. 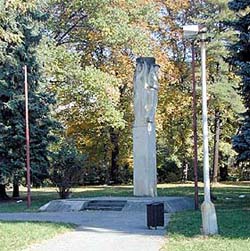 included a 1975 decision to permit the construction of a replacement parking lot on the surface of the horticulture institute under the post office, i.e. on the surface of the former virginal gardens (see the gardens of the former Clarissian convent). With the construction of the parking lot in 1977, a more than 500 year old garden perished. The Municipal Park also suffered in the seventies and eighties not only by a lack of care, but by the placement of the "Commemorative of the fight and victory over fascism" into its central space. By this time, the park with its music pavillion was already registered as an immobile cultural monument. Despite the resistance of the employees of the historical monument administration, the commemorative was realised in the year 1989(!) and resulted in a fundamental change of the disposition of the park, to the disturbance of the original historical composition, and the disappearance of the original footpath network.

In the beginning of the nineties, also in spite of the protests of the monument-conscientious public, the construction of the vast parking area of the Deer Garden was completed, thereby sealing the fate of the already devastated former botanical gardens and of the western part of the garden (the former game parks).

The exceptional status of the town of Český Krumlov, earned not only by its inclusion onto the prestigious UNESCO World Cultural and Natural Heritage List in the year 1993, but mainly by the steadfast activity of the town council shines through in the continuously improving state of its gardens and parks. The ongoing work on the strategic plan for municipal development and the preparation of a new regional plan, let us hope, will help preserve the extraordinary historical and artistic value of the Český Krumlov historical gardens and parks for the many years to come.