After the arrival of the Schwarzenberg dynasty in Český Krumlov in 1719, the Novoměstská garden, also called the kitchen garden, rapidly lost its importance. This was not only due to the remoteness of the garden from the castle, but mainly to the vicinity of new gardens to the princely brewery. Also, already from the year 1726, some parts of the garden were assigned to court officials as payment for similar gardens. Still, the arrangement of the garden was preserved, the old fig tree orchard was repaired as well as one arbour, and in addition a new glasshouse was built for growing subtropical plants. 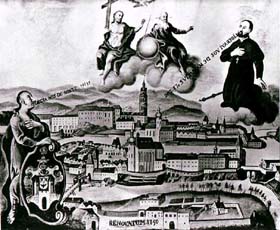 The north field in front of the castle (the local name Deer Garden is substantiated with documents already in the 18th century) was used as a game park for breeding large game. The entire surface of the Deer Gardens was enclosed by walls. The eastern part of the garden had a predominant meadow character, disturbed only by a few groups of bank vegetation along the Chvalšinský brook. The surface of the former Renaissance Gardens on the island was enclosed individually by walls. The grassy inner surface of the garden was obviously planted with fruit trees.

In the period of the rule of prince Adam Franz of Schwarzenberg (1719 - 1732) the seigniorial gardens changed to suit the spirit of the Baroque. The Baroque stage of the evolution of the castle gardens is represented by the landscaping of the lower parterre in a way known to us from a 1750 plan. The composition of the garden indicates that its creators were familiar with the early Baroque gardens in Germany; the lower parterre with its division mainly continues in the tradition of the German examples. For instance the court garden at the residence of the Bavarian duke Wittelsbach in Munchen, the garden at the residence of the duke of Würtenberg in the castle of Ludwigsburg, the garden in Herrenhausen included a similar compositional plan (a quadrangle divided by perpendicular axises and diagonals). From the contemporary garden dispositions in the Czech lands, it is necessary to mention the Květná garden of the Olomouc archbishop at Kroměříž. 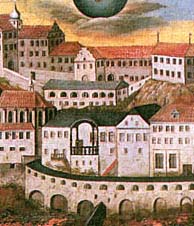 Another advanced Baroque element in the composition of a garden is the use of high hornbeam lanes along the side paths to increase the axiality of the garden disposition, further brodery parterres and the accentuation of the connection of the diagonal axises of the garden to the open landscape with the help of lookout windows, placed in the enclosing wall of the garden.

The Český Krumlov prelates arranged their gardens in the Baroque spirit as well. The veduta of Český Krumlov on the antependium from Cross Hill from the period around 1740 shows on the south front of the prelatura (Horní no. 155) a monumental Baroque balcony placed on the garden terrace. Four profiled columns, between which is a balustrade, carried a roof in the shape of a baldaquine. From the balcony a view unfolds onto the garden of the Jesuits on the other bank of the Vltava and on the silhouette of the pilgrim's chapel of the Virgin Mary on Cross Hill (the chapel on Cross Hill in Český Krumlov).

In addition to this, the balcony also offered a view onto the second prelate garden at Horní Brána, belonging to the Krumlov parish since 1406. It is precisely in this one that a Baroque garden arbour was built in 1740, which formed next to Cross Hill, a second focal point for the view from the prelatura. During the wars for the Austrian inheritance in the year 1741, some of the Český Krumlov gardens were considerably damaged. For instance the French soldiers pulled down the "long passage" (connecting corridor) above the Plášťový (Cloak) bridge. A damage to the court gardens can also be supposed.

The rule of prince Josef Adam of Schwarzenberg (1741 - 1782) meant a further period of bloom for the Český Krumlov castle. The entire collection of castle buildings and gardens underwent a modification in the style of the Viennese Rococo. The young prince started his activities in Český Krumlov with the construction of the winter riding school in the years 1744 - 1746. In the same period the adaptations of the interior of the Bellarie summerhouse and the repairs to the castle pond were in progress. After 1750, the Český Krumlov castle garden changed into the Viennese Rococo style. This period is mainly associated with the names of the architect Andreas Altomont and the sculpture Jan Antonín Zinner. During the reign of prince Josef Adam of Schwarzenberg the Český Krumlov castle garden reached, in its Baroque stage, a peak within the bounds of its entire historical evolution. 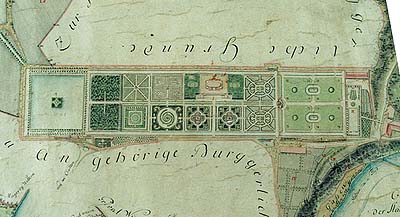 In that time also both seigniorial kitchen gardens (today's Novoměstská garden and the castle supply gardens were intensively used and a large number of reports originate from the middle of the 18th century about the construction of hotbeds, greenhouses and orangeries. The contemporary inventories document the rich assortment of grown exotic plants. At the same time the Český Krumlov Minorites furnished their garden with garden constructions. Shortly after the modifications to the summerhouse Bellaria in the castle garden, a Rococo garden pavillon was built in the year 1758 in the Minorite garden of the Minorite monastery gardens. The princely builder Josef Fortini evidently took part in the construction as author.

In the second half of the 18th century, the still fundamentally medieval appearance of the outskirts of the town began to be significantly modified by the Schwarzenberg economic activities. At Nové město town a seed emerged of the later industrial area in this part of the town. In 1769, construction was finished of the lower princely rechls, opposite the new town's bastion. A part of the burgher gardens on the left banks of the Vltava, two ice storages and evidently also a part of the grafting fields, the lower seigniorial gardens (the (gardens of the former Clarissian convent) in front of the town fortification moat, were victims of the construction of a storehouse for float logs in the vicinity.

In the year 1773 the Jesuit order was dissolved, the college (Horní no. 154) was transformed into barracks, and the wooden bridge over the Vltava was removed. In 1779 the entire territory of the gardens with the summer residence (Hotel Gold - Plešivec no. 55) was bought by the rich burgher Johann Pinsker. The Jesuit garden became a utility garden and the grounds, hitherto undivided, were gradually parceled out. On the outskirts of the former Jesuit grounds the town hospital of St. Elizabeth emerged in 1782, situated next to the already older poorhouse (mentioned in 1638), forming the view ending the present Linecká street.