The dissolution of the Jesuit order, as well as of the Český Krumlov Minorite and Clarissian monasteries by emperor Josef II in 1782, brought further far-reaching changes to not only the plot ownership of the territory of the town but also a decrease of the maintenance of the now former gardens of the Minorite monastery and Clarissian convent. These lost (as did the religious buildings) their original function and were gradually modified into utility gardens and were rented to the Český Krumlov burghers. The landscape character of the valley of Český Krumlov was completed with industrial buildings generally concentrated along the river Vltava. Among the burgher's production objects in the 18th century were the dye-works and washhouse at Kájovské gates. In 1791 - 98 the old washhouse was reconstructed and used by the Krumlov cloth-makers guild. The nearby garden terraces under the church of St. Vitus was used for the drying of dyed cloth. In addition to these, a seigniorial and burgher brewery, a small paper mill and three mills could be found in the town. 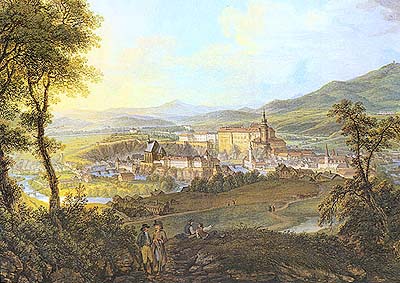 At the turn of the 18th and 19th centuries, the hitherto scattered built-up areas in today's Linecká street became the appearance of a coherent street. The large extent of gardens, orchards and also fields on the surface of the third Vltava meander remained preserved, however. At the end of Linecká street at the banks of the Vltava, the firing range of the town marksmen's association was situated, in the place of the former Nigrín court, from the end of the 17th century. The narrow strip of the surface of the firing range was delimited to the north by terraces with gardens and the meadows at the Baroque garden house (later the atelier of the painter Egon Schiele). The small house with terraces and the gardens situated above them belonged to the property of house no. 271 on today's Plešivec square. A geometric picture by the engineer Jan Nepomuk Šimoušek from the year 1792 is valuable for the identification of the appearance of the court gardens (the present castle gardens), the grounds of Kvítkův court (in those days called "Favoritenhof"), as well as the built-up areas and collection of gardens at the valley level of the Chvalšinské stream at the end of the 18th century. From the Budějovická Gate a strip of gardens was situated, rented to seigniorial officials, between the new royal path (from the year 1763) and the more northerly traced older route behind the Schwarzenberk farmstead. On the surface of today's Deer Gardens the plan documents the existence of a vast production structure for soda as well as seed seperating facility. In the surroundings of the princely forest administration (the present house no. 139) a vast fruit orchard and vegetable garden were situated. Further on, in the direction of Dobrkovice, meadows and princely fish breeding ponds were situated.

At the end of the 18th century, the departure from the Baroque conception for the creation of garden spaces begins to be evident in the appearance of the Český Krumlov gardens among others. In the preserved plans of gardens and the town landscape we can find motifs of Classic and Romantic. The above mentioned plan of the year 1792 documents that in the castle garden the Rococo brodery on the lower parterre was removed. A simple Classic arrangement was founded in its place - beds with a circular ground plan were placed symmetrically on a grassy basis. In accordance to the analogies of the day, they were evidently encircled by ornamental borders and planted with a bright variety of flowers. For the time being the other parts of the garden retained their Baroque, resp. Rococo form.

A veduta of Český Krumlov from the south-east by Ferdinand Runk from the period around the year 1800 comprehensively describes the town landscape. Forgiving a certain idealisation of the scenery, it provides an adequately faithful documentation of the extent and appearance of the town gardens as well as the close contact between the open agricultural landscape and the historical built-up area. Documented with a plan for the first time are tree-lines of poplars (Populus nigra 'Italica') between the castle and the main gate to the castle gardens. The plantings of column-like poplars, fashionable for the day, are a further expression of the contemporary opinion on gardening and landscape creation.

The geometric plan of the castle gardens of engineer Josef Falty from the year 1816 shows further bosquettes on which the previous regular arrangement was abandoned. On the former parterre in front of the Bellarie, the grassy surface uses two flowerbeds to represent the Schwarzenberg coat-of-arms. Most interesting, however, is the state in which the bosquette is opposite to today's "dry fishpond". On the surface of a 60 x 60 meter quadrangle a miniature garden arrangement was founded here in the style of an English park with irregularly led little paths, groups of shrubs and trees. All this within the bounds of a Baroque axional composition and in the vicinity of a then still existing labyrinth and arbour. 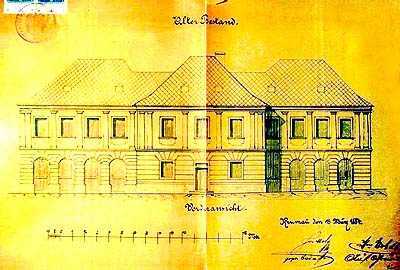 An indicational sketch from the Stable land register in Český Krumlov from Josef Langweil from 1826 is the first modern drawn source which gives information about the surfaces of the gardens and their type for the whole territory of the town of Český Krumlov. The sketch catches the structure of the town landscape about half a century after the extensive changes in the plot ownership as a result of the dissolutions of the Jesuit and monk orders. The town's built-up area expands gradually. New town settlements emerge at the outskirts of the town. An example of this so-called vilegiature, suburbial villas with an ornamental and utility garden, is the villa Špičák no. 114 (Ernest Mayer mentioned as proprietor in 1826), situated north of the older built-up area on Chvalšinské route.

On the territory of the Deer Garden, in the place of the vast soda-works, from the map we have from the year 1792 (see above), the indicational sketch shows the educational gardens of the Schwarzenberg agricultural institution with an operational building and a botanic garden. The botanic garden extends itself (aproximately on the surface of the "gardens on the island", then long-perished) on a groundplan of a 75 x 60 meter rectangle, formed under the influence of the fashionable natural landscaping style. The natural landscaping (romantic) style of the garden composition of the botanic garden looks strikingly like the arrangement of one of the bosquettes in the rear part of the castle gardens, documented by the map of the garden from the year 1816 (see above). On the territory of the Deer Garden production objects could always be found (the so-called new soda-works and seed separating facility). For the ornamental garden the institution mentions the name "Botanischer Garten". Though its groundplan division is not described, the drawing of various types of trees and shrubs indicates that the garden was freely planted with deciduous and coniferous trees and shrubs. Further gardens belonging to the institution are generally characterised as utility gardens, and their geometric allotment is indicated. Along the Knížecí street up to the area in front of the bridge of the Budějovická Gate, and on the access way to the castle and to the castle garden, tree lines of column-like poplars were planted.

On the suburb of Horní Brána the indication sketch shows the garden at Nové hospody (today's Horní no. 2 - Municipal Theater) and the Prelate garden with arbour. The indication sketch also indicates, in an extraordinary plastic way, the character of the suburbial built-up area on the territory of the third Vltava meander as well as the scattered smallholder's built-up area of lower Plešivec with the production buildings of the paper mill and brickworks factory.

An example of the effort to create a sentimental romantic landscape from the area surrounding the castle gardens was the construction of the ceremonial church on Ptačí hrádek. It was built on the occasion of the victory of Karel of Schwarzenberg over Napoleon during the battle of Leipsig in the year 1813. In the craggy slope above the Rybářska street, an area not used until this point, a romantic lookout path was created which connected the castle with the outlook point (the Paraplíčko fortification) in the Plášť garden (castle supply garden).

The economic situation of the time saw to it that the interest of the gentry to support productional horticulture did not diminish. The older seigniorial horticulture institute in the Novoměstské garden and Plášť garden (today's castle supply gardens) was used for growing fruit, vegetables and flowers. In the 1840's, for instance, new greenhouses were built for growing pineapple. The surfaces not needed by the gentry were rented out.

The appearance of the town landscape is documented on a number of vedutas from the first half of the 19th century which show the castle residence and the town itself in the surroundings of the open agricultural landscape. The town's developed area still does not exceed the borders of its medieval foundation in a significant way. Paintings and graphics show often details of gardens which no longer exist, for instance the orangery in front of the south facade of the prelature and the second orangery in the gardens above today's Horská street at Plešivec. A popular subject for the veduta painters were coloured pieces of cloth drying on the terraces under the church of St. Vitus on wooden poles. A study of the iconography of Český Krumlov reveals that the commencing industrialisation did not yet change the town image in a fundamental way. Besides the older seigniorial and burgher production installations mentioned above, only two newer industrial works are mentionable - the cloth factory of the Jungbauer brothers in the Budějovický suburb and the flax laundery in Spolí. 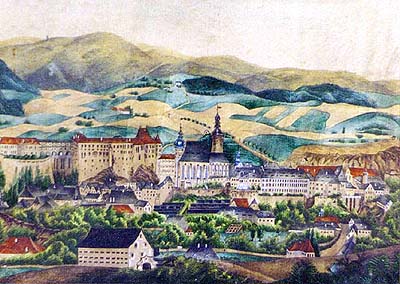 In the year 1848 two unfortunate turns of events struck the town of Český Krumlov at the same time. The first was that the prince Jan Adolf II of Schwarzenberg moved the seat of the main Czech family residence from Český Krumlov to Hluboká. Without the court life, the town and castle began to decline into insignificance and a peripheral position. On the 14th of June of the same year, torrential rain and floods devastated the Deer Garden as well as destroying the bridge in front of the Budějovická Gate as well as the factory of the Jungbauer brothers.