The archaeological research of the house No.20 in Panská Street 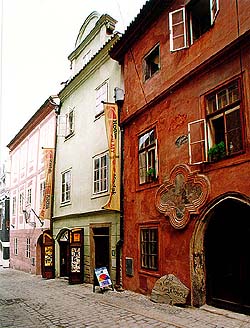 The house No. 20 in Panská Street is first mentioned in 1459. The Gothic ground-floor peripheral walls and the back chamber walls opened up with the archaic ridge portal dating from the 14th century. The elongated housing plot originally continued through the yard (today empty) and took in a part of the house No. 30 in Dlouhá Street.

At the end of the 13th century the building with its front wall led to Panská Street as well as the today house No. 20. There used to be the half-ground cellar with the built out wall and ceiling construction and pottery clay in the front part of the house. We do not have any evidence of the surface part of the building.

The building was destroyed during the fire before the end of the 13th century. Its signs were discovered by the archaeological research. The original building was replaced with the stone house.