The area of the Vltava River and the Polečnice River confluence attracted the attention of our ancestors from the Primeval Times. The river flows through the deep inaccessible canyon bordered with the Šumava foothills and then flows into the open and less broken ground. The man could cross the river easily and then continue his journey in different courses. There are quite large areas on the river bank (reminding tongues of land) which were suitable for permanent or temporary settlements-primeval farming and fishing communities. 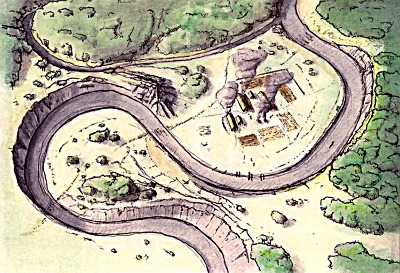 The most suitable settlement conditions seem likely to have been in the area used to called the Low Manorial Gardens (today called Latrán and The New Town). The oldest discoveries were found there. Several stone tools made of crystal, opal, silica dating back to the end of the Stone Age. Those are probably remainders of the temporary settlement established by hunters and berry-pickers 1,200-1,400 years ago. The same place was chosen by the first Neolithic farmers in the 5th century BC. The Neolithic cultural layers discovery of some pottery fragments and a stone wedge in the region of Český Krumlov is very remarkable. There are only few localities of the same age in the South Bohemia. The one mentioned earlier is the most southern and 480m above sea-level.

We do not have any other evidence referring to farming villages and farmsteads from that period. The very advantageous strategic location along the ford did not attract only the usual settlers. Our ancestors built the high-rise settlements on the near rocky promontory - apparently fortified points of support dating from the end of the Bronze Age around the year 1500 BC then about 900 years later and in the end of the Iron Age. The high-rise location might have been used by the Celts in the last century BC. (The primeval settlements of the castle knoll in the town of Český Krumlov).

Our Slavic ancestors were interested in The Vltava river-site area already settled in the Neolithic Period. They settled down during the 8th century AD. We have managed to search one of the sunk cottage - a half-ground shelter in their settlement so far. It was discovered during the collector installation in 1991-1992. A large number of pottery fragments and some pieces of fired clay were found in the cultural layer filling the parts of the sunk half- ground shelter remains.

The other a little sheerer river-site was settled during the Early Middle Ages. Any evidence of Slavic settlements have not been found so far, in contrast to the location of "The New Town". It may be caused by the enormous structural work. The local inhabitants have spread widely. All the older settlement remains may have been destroyed irretrievably. The single pottery fragments are only excavated from earlier cultural layers dating from the period of the town existence. The settlement is evident to have been situated somewhere near the town much earlier than the town itself. Several pottery fragments dating from the 8th - 9th century come from the archaeological researches in Svornosti Square No.15 and Radniční Street No. 29. A pottery crock dating from the 11th or the 12th century was also excavated there. Other three pottery fragments dating from the 9th - 10th and 10th-12th century come from an indeterminate place somewhere in Český Krumlov, and are displayed in the České Budějovice Museum Depository.

With the exception of the half-ground shelter dating from the 8th century only several single crocks were found. It is probable that a little Slavic settlement had been founded on both of the Vltava river-sites a long time before the town itself. The insistence must be proved to be correct in the future.

The medieval stronghold - the castle of the Lords of Český Krumlov and Rožmberk settlement and later a settlement round the castle were built on such an important thoroughfare.