Location:
The little castle of Omlenička is located about 4 km to the south-west of Kaplice 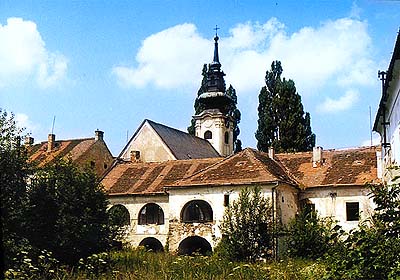 Origin of the Name:
The name Omlenička (the German name is Klein Umlowitz) was derived from the word to grind something and it has a connection with the nearby brook. Its banks were ground by running water.

Description of the Place:
The little three-wing Baroque castle with the central projection of a wall and four bays on the corbels in the front east side. The Baroque church of Saint Jan Nepomucký is joined to the south wing of the little castle. 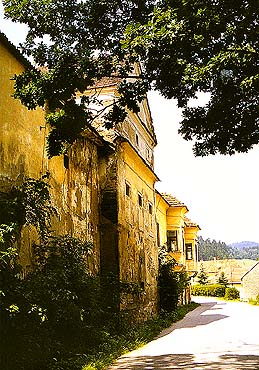 Architectural and Historical Development:
The little castle of Omlenička was built at the beginning of the 18th century on the place of a former Renaissance fort. In 1829 it burnt down but it was reconstructed again very soon after.

Significant Architectural Features:
One of these details are the ruins of the former Renaissance fort that are included in the little castle's composition and were discovered during the reconstruction works of 1970. They appeared when the timbers of the roof broke under the weight of snow.

History of the Castle's Residents:
The fortified settlement of Omlenička with the village situated nearby was the part of the Pořešín castle estates until 1363. In 1363 Přibík z Pořešína sold the fort of Omlenička to Oldřich z Drochů whose offspring owned the Omlenička fort until 1465 when it was sold to Přibík Žídek z Mostku. The fort was in his family's estates until 1546 when it was sold to Diviš Malovec na Libějovicích. Then the fortified settlement of Omlenička changed the ownership many times until the beginning of the 18th century when it was passed over to earl Antonín from Ntz and Josef Gundaker, earl of Trheim. In 1778 the little castle of Omlenička was passed over to the Cistercian monastery in Vyšší Brod and it stayed there until the nationalisation of the 20th century.

Present use:
Today the little castle of Omlenička is used as a utility building.