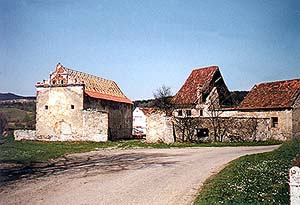 Location:
The Štěkře village is located 7 km to the north-east of Český Krumlov.

Origin of the Name:
The name of the village and fortified settlement is derived from the surname Štekr (wood-cutter) and it means that it was "Štekrova ves" (a wood-cutter's village).

Architectural and Historical Development:
The buildings of the fortified settlement are a remarkably valuable example of the Renaissance style of the 16th and the 17th centuries. The whole settlement consists of a residential building in the Gothic style which is on the gate's side broken with three windows and decorated with a sun dial. Two loopholes situated in low level were built in the back part of the buildings. The room on the ground floor was vaulted. A rich profiled ceiling from the year 1608 was installed on the upper floor. The residential part was supplied with a granary renovated in the Renaissance style, and also with a former blacksmith's and another out-buildings. The whole complex is enclosed within walls. 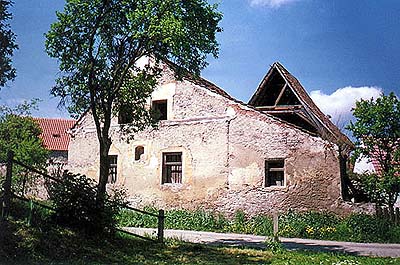 History of the Place's Residents:
Menhart ze Štěkře was the first known owner of the fortified settlement and village of Štěkře. He is mentioned in historic sources for the first time in 1336. Vernéř ze Štěkře owned the settlement three years later and then in 1381 Bernard, who had a fork in his coat-of-arms, was mentioned as the owner. He owned it until 1386. The other records about the owners of the fortified settlement are from 1444, when Štěkře owned Olbran ze Štěkře. In 1459 Mikuláš z Holtova was the owner. He sold the fortified settlement to Linhart by emphyteusis for the price of 45 sixties of groschens and two sixties of a year salary. Nothing is known about other owners of that fortified settlement. The Kalkuš family are mentioned as the owners in the provincial records from the 18th century. They stayed there until the middle of the 20th century. The out-buildings were passed over to the United co-operation farm in 1956. The residential part was left by the owners in 1962 because it was in a very bad condition. The place fell into ruins, in 1964 the co-operation farm began to move from that place. In 1968 a barn built near-by the fortified settlement burnt down. Several institutions got interested in the place but it was never reconstructed. 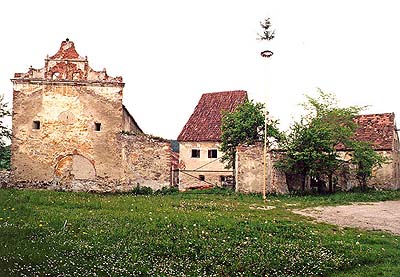