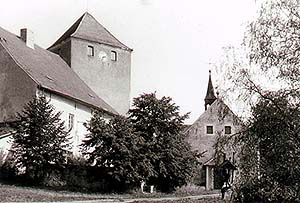 Location:
The fortified settlement of Slavkov is located 7 km to the south-west of Český Krumlov.

Origin of the Name:
Slavkov (the German name is Lagau) is derived from the Christian name of the owner and it means "a court of Slávek".

Architectural and Historical Development:
The fortified settlement of Slavkov is one of a few buildings where the original connections of individual elements of a country seat of the gentry preserved. It is even more precious because it is very well documented from the historical point of view.

The most important building of this yeoman's settlement was a square tower that has today except of a ground floor also two upper floors and a walled part under the roof. In 1791 it was rebuilt into a bell-tower and a clock was put there. The tower is next to a dwelling house on the north side. A little draw-bridge on the second floor connected the house with a cuspate portal that was preserved in the walls. The yeoman's settlement was surrounded with a church and out-buildings situated in a square and closed with stone-walls with loopholes.

History of the Place's Residents:
The fortified settlement Slavkov, originally called Louka (Meadow), is mentioned for the first time in 1311, when Bušek ze Slavkova set the village Smědeč in the Brloh region, about 2 km from Kuklov. In the middle of the 15th century Slavkov was owned by Odolenové z Komařic, whose original settlement was Komařice by Borovany. After them Slavkov was under the ownership of many owners, members of the gentry. In 1584 Wilhelm von Rosenberg bought the fortified settlement, the farmyard and the village together with the village of Mezipotočí from the brothers from Šonov. His successor Peter Wok sold Slavkov in 1596 to his private doctor who died without any descendants. Slavkov fell in the right of reversion to the emperor Rudolf II. von Habsburg who passed it together with the village over to Václav Berka z Dubé. Český Krumlov was the last owner of Slavkov and it was bought by this town in 1607.

Previously a school building was in the area of the fortified settlement but because it was too small, a new school was built in Slavkov in 1893. In 1967 the last renovations of the whole area were made.

Some smaller yeoman's yards were also situated near-by Slavkov. These settlements in Cipín and Mezipotočí never reached a level when they could build their own fortified settlement, though the members of gentry were living there and used the right of independence. In spite of the graphite and iron ore mines in a place near Slavkov, industry was never developed there. The village of Slavkov together with the Mezipotočí community had about 582 hectares, 77 houses and 371 inhabitants in 1934. Almost a half of houses and people were in Mezipotočí.