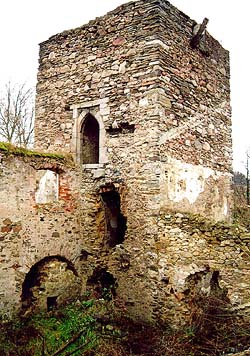 Location:
The fortified settlement of Pasovary is located 9 km to the south-west of Český Krumlov.

Origin of the Name:
The name of the fortified settlement and village nearby comes from the German word Passauer - Pasovan, a man who comes from Passau. The original name was Passauerlag and it was slowly Czechicised. The name of the place can be derived from its first inhabitants who came to the Czech border regions as colonists from Passau and its neighbourhood in the middle of the 13th century

Architectural and Historical Development:
The two-floor prismatic tower in the middle of the yard deteriorated slowly and was preserved until today. The Gothic door jamb of the origin entrance from the second half of the 14th century is situated in the east wall of the tower on the first floor level. The corbels supporting the window are on the north side opposite. 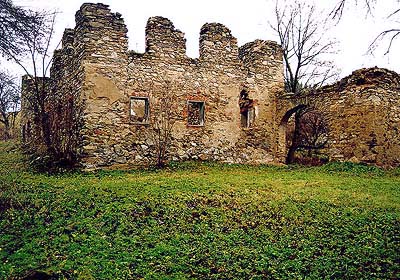 History of the Place's Residents:
The first mention of the village that no longer exists comes from 1278. It was owned by the Chieftains from Cipín. Its owners were alternatively called from Pasovary and from Cipín. When this family died out, Matěj Višně z Větřní received the estates of that family as an escheat. In 1623 the fortified settlement of Pasovary was confiscated. The Višňů family took part in the insurgency of the Estates and so the fortified settlement was confiscated by the emperor and sold to Český Krumlov in 1624 together with other villages and yards. The fortified settlement of Pasovary ceased to be the aristocratical residence and deteriorated.

In 1907 the fortified settlement of Pasovary burnt down, between the two world wars people left the village and after 1945 it was demolished. A pasture co-operative was placed in the settlement for some time but then it was left deserted.