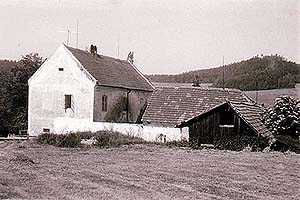 Location:
The village of Kladenské Rovné is located between the villages of Kájov and Hořice na Šumavě about 7 km to the south-west of Český Krumlov

Origin of the Name:
The name Kladenské Rovné arose by linking two words "Kladenský" - built of "klády" (logs) and "rovné" which means plain or flat surface.

Description of the Place:
A building looking like a peasant's farmstead is today on the former fortified settlement. Only the internal vaults of the windows and ceiling on the first floor remained of the Middle Ages stony construction of the residential tower.

History of the Place's Residents:
Bušek z Rovného was the earliest owner of the village. And there is evidence of him from 1308. As time went on, many owners coming from the gentry owned Rovné. The last owner Ondřej z Nemyšle appointed Jindřich z Rožmberka as a guardian of his under-age children and to administrate his estates. Jindřich sold the fortified settlement and the village with a mill to his chancellor Václav in 1487. Václav was a political adviser of the ruler and also controlled the culture life on the court of the Rosenbergs. Václav, who started to call himself after the settlement z Rovného (from Rovné) (Václav z Rovného) bought from the Rosenbergs the villages of Ličov and Močerady and sold them again together with the fortified settlement to the Vyšší Brod monastery in 1506 but upon the condition that he could use all of those estates until the end of his life.

Because of his age Václav z Rovného gave up the post of chancellor in 1509 but as the private adviser of Peter von Rosenberg another ten years he was able to keep his influence upon the Český Krumlov court. After the death of Peter von Rosenberg, his younger resolute nephew Jindřich took over the rule and put Václav z Rovného in jail in the castle of Český Krumlov for several months. Meanwhile he took possession of the fortified settlement, village and its harvest and forced villeins to work for him. Václav was freed from the jail after Jindřich's death in 1526 and soon after he moved to České Budějovice. When he died Rovné became a part of the estates of the Vyšší Brod monastery. The number of inhabitants were increasing until the beginning of World War II. In 1841 there were 27 houses with 176 inhabitants, in 1930 there were 31 houses and 204 inhabitants. World War II stopped any further development of the village. After the evacuation of German inhabitants, the number of people rapidly diminished and it was not counterbalanced during the completion of the settlement of the Bohemian borderlands. According to the last census only 17 houses are now in Kladenské Rovné, and only 12 of them are permanently settled with 29 inhabitants.

Tales and legends:
Once upon a time an old maid fell into a pond that was later dried out and changed into meadows. Because she did not want to get drowned she asked the local green-coated manikin for help. The water sprite took her to his house, sat her to a spinning-wheel and told her to spin flax for his new suit. The poor woman spun for three years but there was still too much flax left. Once she had a dream to turn the skein about. She did so and suddenly she was finished with her work. At that moment she appeared at home again and had a bag full of ducats with her.

Once the Holy Virgin saved a young woman from the village from an evil spirit. The woman was cutting grass and suddenly the earth under her started to shake and a young strangely laughing devil of a fellow appeared in front of her. Half-dead she unwittingly clasped a nearby stone. When she got over the shock, the devil disappeared inside the stone, she was leaning against and she saw bare foot prints on the ground. In a distance she saw a woman dressed in a long coat and carrying a baby.

Present use:
A gamekeeper's lodge of the State Forests is today on the place of the former fortified settlement.