History of Sculpture in the Český Krumlov Region 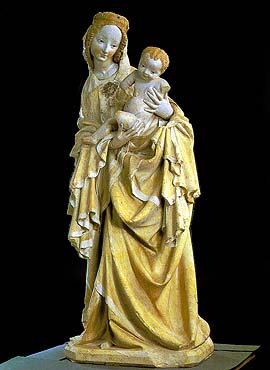 Český Krumlov entered the development of Central European Gothic sculpture at the peak of a period of the so-called beautiful style. The famous Madonna of Krumlov from 1393, that is today placed in the Arts and Crafts Museum in Vienna, especially represents this style. Although the most of the sculptures up to that time were imported from the centre of Praha, the Český Krumlov court that had very high level of cultural life, established a tradition of a local carving production and this production reached very high quality in the following 15th century. The need of such production was also developed thanks to quite a high number of Marian pilgrimage places (Vyšší Brod, Zlatá Koruna, Kájov), that were, even at the very unstable times of the Hussite wars in the 15th century, protected by the Catholic dominion of the Rosenbergs. (Places of Pilgrimage in the Český Krumlov Region) 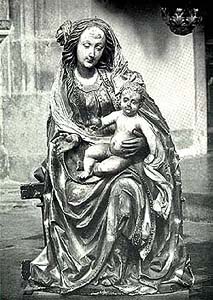 Until the last quarter of the 15th century the tradition of the beautiful style, after enriching some local features, slowly came to its end. A number of preserved Late Gothic sculptures that came the most probably came from the Český Krumlov churches, were moved into many of the little village churches and chapels during the next centuries. Today most of these works are placed in the collections of the District Museum of National History in Český Krumlov, many of them are in the Aleš´s Gallery of South Bohemia in Hluboká nad Vltavou, some of them are in the National Gallery in Praha. The influences of the excellent Passau carving workshop of the Master of the altar in Kefermarnt arrived in our region at the very end of the 15th century - for example the Madonna at the great altar in the Kájov Pilgrimage Church which is a reminder of the original lost great altar. The original great altar was made by the very active Kájov priest Pils between 1500 - 1503. Beside the Podunajské influences it is also evident the influence of the carving workshop of the Master of Mourning over the Death of Christ of Žebrák from České Budějovice (the sculptures of St. Peter and Paul from Svéráz, today placed in the District Museum of National History in Český Krumlov). The superiority of the works connected with the Marian cult is dominant in the production of sculptures.

The main reason why the production of stone sculpture, except of ornamental moulds, was not developing so fast was lack of suitable stone. The sculptor used only yellowish not very durable granite of very poor quality taken from smaller quarries located near Besednice and also from granite boulders found at the slopes of hills. Unfortunately it was very difficult to work these stones. 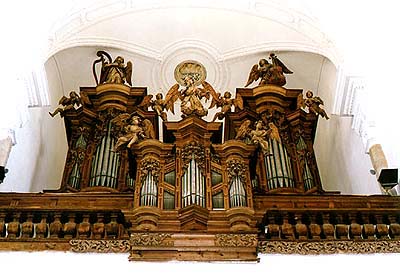 After the battle of Bílá Hora (1620) the Eggenberg period at the end of the 17th century brought vitality to the production of sculptures in Český Krumlov. Some of Masters of carving from Upper Austria who worked in the border-lands on the estates of the Premonstery monastery in Schlgel and the Cistercian monastery in Vyšší Brod - Johann Wrath from Schlgel (decorated some altars of the monastery church of Presentation of the Virgin Mary and Corpus Christi and the great altar in the St. Vitus Church in Český Krumlov) and Philip Rambler from Freistadt (the sculptural decoration of the great organs of the former church of the Zlatá Koruna Monastery from 1698 - 1699) came to the Český Krumlov region. The oldest Baroque stone sculptures of Český Krumlov - St. John the Evangelist and the Holy Virgin under a stone crucifix were made 1691 - 1693. Today they are placed at the court of the former prelature in Český Krumlov (Horní No. 155). Their sculptor - allegedly coming from the people from M. Lindenmayer's group - managed to work through with the expression and the details of the figure very impressively, even if it was difficult to work the granite material. Far from this standard of work is the sculptor - probably a sculptor of Český Krumlov, Josef Pabl - of the granite Bičovaný Kristus (Whipped Christ) and Jidášův polibek (Kiss of Judas) placed in the chapels on the bridge before the Budějovická gate.

A work of the important Baroque sculptor Matěj Václav Jäckel on the sculptural decorations of the Marian Column built in 1716 at the square in Český Krumlov is considered to be a real breakthrough of the High-Baroque in the Český Krumlov region. The architecture of the column itself was made by a local stone-cutter J. Plansker. Jckel himself made the top sculpture of the Immaculate and another eight sculptures of saints - St. Wenceslas, St. Vitus, St. John the Evangelist and St. Jude Tadeus in the corners of a pedestal and St. Rochus, St. Francis Xavier, St. Sebastian and St. Gaetano in the pedestal niches. (Fountain in the Square of Český Krumlov). Matěj Václav Jckel also influenced the work of the most significant sculptor of České Budějovice Josef Dietrich who also worked in the Český Krumlov region and sculpted a replica of the famous sculpture of St. Anna, placed on the Charles´ bridge in Praha, on a bridge in front of the Vyšší Brod monastery.

An expansion of the St. Jan Nepomucký cult in the middle of the 18th century was considerable especially in the border-lands of the region. At that time several very valuable St. John´s pillars and sculptural groups were made (Rožmberk nad Vltavou, Benešov nad Černou, Rožmitál na Šumavě). The Baroque religiousness as well as the new artistic influences coming through the court of Eggenbergs and also later on the Schwarzenbergs, were responsible for the great development of the Late Baroque and Rococo sculptural production in stone, stucco and wood. A very easily workable whitish lacustrine limestone began to be imported from the quarries near Eggenberg in Austria. Český Krumlov became a work place of the most significant local Late Baroque sculptor Jan Antonín Zinner who was a student of Josef Dietrich. Four sculptures placed on the Cloak Bridge - St. Antonín Paduánský, St. Felix from Kantalicie, St. Jan Nepomucký and St. Wenceslas - are from his workshop. In comparison with Dietrich´s sculptures these, made in 1747, are more static, the bodies are taller and thin, only the faces suggest an attempt at deeply affected expression. But generally the works do not surpass the professional standard.

A break through in Zinner´s work is a sculptural decoration of the Cascade Fountain in the castle park. It is considered as the greatest sculptural work of the 18th century. The decorations began in 1749 and they were finished with help of the Český Krumlov sculptor Josef Griesler in 1765. It is difficult to distinguish exactly which part of work belongs to whom but according to the records Zinner had to correct some of Griesler´s work, so it is possible that Griesler made mainly decorative parts (vases, etc.). Detailed work is pushed a little back by a dynamic playfulness of the single central sculptural groups that were designed by Andreas Altomonte. He was inspired by similar work abroad. As a whole the cascade fountain with its dynamic and close composition of the sculptures placed in a small space is much more impressive than for example a similar fountain near Belveder in Vienna. The decoration of this fountain is spread into larger space.

It is possible to see some similar tendencies on much simpler sculptures such as the Holy Virgin and St. Joseph placed on a bridge above the Bear Moat at Český Krumlov Castle - and especially the sculpture of St. Joseph with quite daring design of the sculpture of the Infant Jesus by his foot. It is recognisable that its sculptor, who is identical to the sculptor of the cascade fountain, did have a chance to meet the most impressive works of his time in neighbouring Austria, probably thanks to the court of the Schwarzenbergs. For completeness it is necessary to mention the stucco work of Mathias André in Český Krumlov castle.

The promising increase of the sculptural production in the Český Krumlov region dropped again in the last third of the 18th century. Matěj Grisler, whose work did not reach the standard of Zinner´s work, died in 1773 and after his death no significant personality worked in sculpture in Český Krumlov. The sculptors and artists from the neighbouring regions are chosen to do more complicated works and only the tradition of stonemasonry is still alive in the Český Krumlov region.