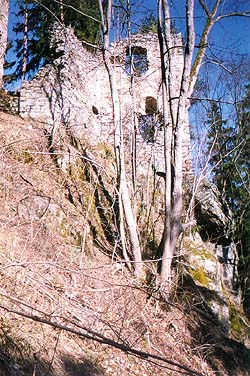 Location:
The ruin of the little castle of Louzek is located 4 km to the south of Kaplice

Origin of the Name:
The word Louzek (in the German language Lauseck) comes from a German word Lauer - hiding place.

Architectural and Historical Development:
The little castle of Louzek is located as a river tear on a wide headland of the fast flowing Malše river. The builder who built the castle did not sufficiently take advantage of the headland itself. The stringent financial situation did not allow the owners to use this headland to build a big castle and forced them to build the little castle in a corner of sheer rocks surrounded from two sides by the Malše river. Two remaining sides are protected from the west only by a simple mound that is strengthened from the north with a trench quarried into the rocks. The whole castle complex was made up of two parts at the time of its glory days. The first part was a little barbican situated between the north and west mound and the second is the centre of the castle itself that has pentagonal design. There were out-buildings built on the barbican but nothing remains of them. The same fate also hit the walled part of the castle. The erosion activity of nature supported by the lack of interest of the owner about the future of the construction accelerated the end of the castle buildings from which mostly only plain base walls remain. Only in the south-west part of the fortified place the remains of stony dwelling houses remain.

History of the Place's Residents:
The very beginning of the castle is lost in times past and it is very difficult to prove the date of its establishment and its original owner. The whole construction was built on the boundary of three estates: the Rosenbergs, estates of Pořešín of the Bavors and the Benešov estates of the Lords from Michalovice. Probably the Lords from Maršovice, coming from the family of the Witigonen, who had a rose in their coat-of-arms and were poor relatives of the Rosenbergs lived there. They lived in a friendly relationship with the Lords from Pořešín because Hroch z Maršovic was a guardian of young Markvart z Pořešína and the whole estates. Later the little castle of Louzek became an property of a member of the famous and also powerful family of Malovci, Jan z Malovic. However, his sons passed the little castle of Louzek to Ulrich II. von Rosenberg in 1448 who joined it to the estates of Nové Hrady. In 1541 when the list of the Rosenbergs´ estates were made, the little castle of Louzek was already mentioned only as a deserted place. Although nobody lived there from 1448 one can find in the market papers concerning the sale of the half of the Nové Hrady estates from 1641 a notice that the little castle is still in a good condition. 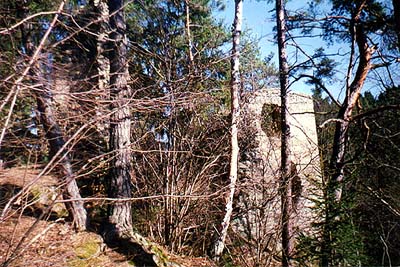 Tales and legends:
On a sheer rock above the Malše river are the ruins of the little castle of Louzek the owner of which was a cruel and bad knight. Once a pilgrim from Jerusalem came to the castle and warned the cruel castle Master of rightful punishment. But the knight did not care and put the poor pilgrim into the castle cellar where he suffered from snakes, scorpions, bats, salamanders, toads and rats. When the prisoner died all of those horrible animals spread all over the castle. Scared inhabitants escaped and the repulsive varmint ate the cruel Master alive. Since then the castle has not been settled and nobody can help the last owner who walks at night in the ruins crying and screaming.

Once on Christmas Eve the pigs ran from a farm yard under the castle, ran away and a young herdsman ran after them to catch them. He could not find the lost herd it was only at the next Christmas Eve that the pigs and the herdsman appeared again in the yard. The boy told that he ran after the pigs in the underground cellars of the little castle of Louzek but he did not know that it took all year.

Fearsome robbers settled down in the ruins of the castle. There was a passage underground leading to an old lime tree. Every night the robbers stretched out a wire with a bell on the end. When the bell began to ring they ran out of their hidden places and robbed the poor traveller, killed him and buried him under the roots of the lime tree. When the robber band broke up the treasure was left in the underground passages. Whoever would find the remains of that lime tree and also the underground passages could take this treasure with them but they have to give a half of it for the benefit of the church.