The New Town Garden in the 18th and 19th centuries

Architectural and historical development:
Adam Franz of Eggenberg overtook the Krumlov manorial estate in 1719 and shortly after that initiated Baroque modifications of the castle's residence. The New Town Garden, however, remained in the shadow of the New Castle garden, a Baroque change of its area being made already in 1720. The area of the New Town Garden loses its main feature as a decorative court garden and becomes a useful kitchen garden. The interest of the nobility in vegetable and fruit growing for the noble kitchen in the New Town Garden however continues - in 1723 a new greenhouse was built. The art-historical development of the New Town garden as a unified composed garden area was finished by a decision of the nobility from 1726 to allot the parts - at that time mostly useless - of the new town gardens to castle's officers for rent. Despite this, the nobility for its own purposes keeps the land in the northern, better lighted half of the garden with the old garden constructions of orangery, relaxing house etc. At that time the garden is called "the lower kitchen garden". Productive garden constructions are kept and frequently repaired. At the same time, the greenhouses for pineapple and "Italian fruit" growing are being built in the so-called Upper supply kitchen garden Na plášti - (today's gardening centre of the castle's administration). In this manner two noble productive gardening centres are established, which demonstrates the range of needs of garden produce at the castle court. 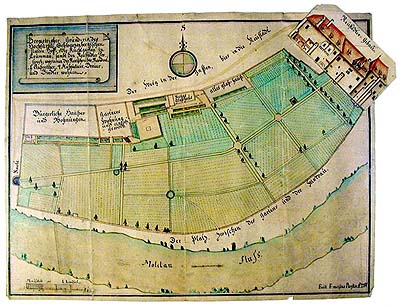 The form of the New Town Garden in the 18th century is well documented on its plans, stored in the States district archive in Třeboň, Česky Krumlov branch. The garden plan from 1764 is the most valuable preserved map source and tells us about the shape of the New Town Garden. It is called the "geometrical plan of the princely Schwarzenberg lower court and kitchen garden in Krumlov, which contains a "new town prospect" (a view of the mansion) in which a retired clerk, comptroller, cart-driver, 4 musketeers, brewer and inn-keeper live". The plan is signed "Fecit Franciscus Plansker 1764." A colourful drawing of the western portal of the castle ( Latrán No. 27) is glued to the garden's ground plan. A grotto is drawn to the western garden wall. In front of today's house Latrán No. 22 a greenhouse (built next to its southern wall) is drawn. There was a hotbed and a new greenhouse ("Neues Glashaus") in the east of the gardener's house. Behind it, in the place of the later fighouse, the next greenhouse ("altes Glashaus") is drawn. There were two round fountains in the garden.

At the time of the planning, a part of the garden was allotted as a deputation to noble officers; this is proven by small garden arbours and the above-mentioned entrances made into the castle's walls. In spite of this, the inner arrangement of the garden's area and the path's net still have the obvious marks of the composed arrangement of a manneristic Rožmberk garden. The main garden axis lead roughly out from the centre of the mansion's garden front-side. The square garden area, which was divided by a road cross into four bosquets bordered by live fences, was located right next to the castle. The cross centre is emphasized by a classical garden architecture motive - extended area on the round ground plan. Behind the four bosquets the garden axis turned (the turning point was again emphasized by a round space lined with live fences) and continued in the direction of the grotto. The crossing of the main axis with the vertical axis coming from the gardener's house is emphasized by a group of four trees on the plan. A passage into the main entrance next to the gardener's house behind the house entrance level continued in the vaulted arcades. 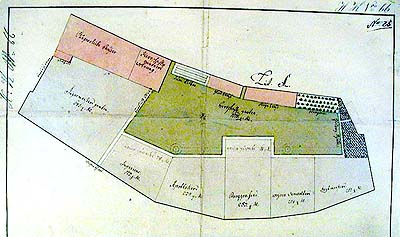 A later map (the inscription holds a date of approval 30, December 1780) includes two New Town Garden plans in one map list. The upper plan (marked "A") shows the situation of the garden division into the individual deputised gardens. In a somewhat different course compared to the earlier plan, the original main garden axis, on which two round fountains were situated, is marked čárkovaně, lined. The axis ends in the place where it crosses the gardener's house and does not continue further to the grotto - eastern part of the garden, as the description mentions, was used by the princely hunter. At the time, the nobility was also using only the lands in the north of the main garden axis - climatically more advantageous areas in front of the lighted northern castle garden wall with the greenhouses and hotbed. In the castle part of the garden and behind the gardener's house followed a hotbed, greenhouse, fighouse, orangery (open-roof area, surrounded by walls in all directions, where in summer "letnily" - plants that like the warmth - were exhibited). In front of the mansion there was a place for planting and cultivating the seeds of fruit trees. 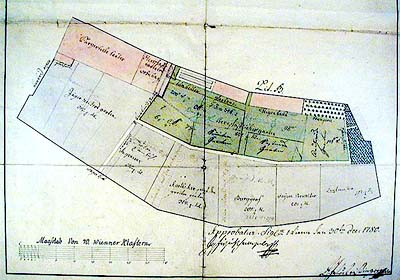 The lower plan (marked as "B") documents the expansion of the deputative gardens area to the detriment of a part used by the nobility. Later drawings show the changes in the owners. For the first time it also shows the object of the lusthaus (relaxation house) on the left of the entrance gate (its roof type is suggested on the ground plan) and a courtyard with a shed. The route of the main road corresponds with the condition preserved in the garden until the year 1990. On the lithography of J. Langweil, M. Falta and A. Langweil from 1819 we can see a long southern facade of the old fighouse with a big fabion cornice (identical with the one on the orangery in the kitchen's garden of the castle). The fighouse is followed by an object with two windows and a roof with a timbered half-gable, probably a brick garden house. Its identification with the garden's arbour in the Minorite garden does not seem likely.

The indicative sketch for the Český Krumlov Stable land-register of Josef Langweil from 1826 is a valuable document describing the state of the garden in the first half of the 19th century. It can be compared with the garden inventory (see the above) from the same period. The middle road is drawn with fences from both sides. We can suppose that at that time the fencing was already made of two rows of the stone pillars with the boards inside. An inventory of the property from 1827, derived from the 1826 indicative sketch, systematically describes individual objects, beginning with the gardener's house from the west to the east. All the buildings from the inventory are drawn on the plan. By the northern wall, a wooden construction of orangery is marked in yellow (in the inventory called as "Gartenhaus", later on called the Fig-house) as a rectangular building with sizes roughly 25 x 7m. Close to the eastern wall of the orangery an unknown object, probably also an arbour, is drawn from the inventory. The next four wooden arbours, which belonged to the individual garden tenants, are marked as yellow squares. The classicist brick arbour is missing; today it is situated close to the southern garden wall, approximately 30 metres from the southern corner of the mansion. The front garden area (the inscription indicates the user Johann Rosenauer) is not divided into any parts, only one arbour is drawn in, there is a wooden shed on the ground plan approximately 15 x 10 metres by the southern corner of the mansion. 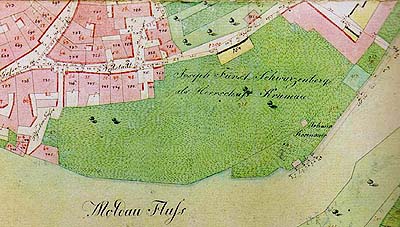 A photograph from an unknown author from the 1870's catches Cesky Krumlov from a slope of the Cross hill. It shows the fig-house (orangery) in the area of the New Town Garden, reconstructed in 1863.