Buildings and structures in the Český Krumlov Town Park

Former Jesuit summer residence (no. 55) (Hotel Gold):
This is located in the northern part of the Town Park close to the bank of the Vltava. A summer residence was built by Jesuits of Český Krumlov in 1662 here on the area of three old homesteads bought in 1590. The four-wing building with a narrow square yard enclosed in its centre included even part of one of the three original homesteads (today's northern wing of the building). The present building appearance comes from a classicist reconstruction in the turn of 18th and 19th centuries when it was rebuilt for living purposes after the dissolution of the Jesuit order in 1773. The outer facades are simple, windows are framed with mounts, corner sections are accented by plaster rustic works. At present the yard can be accessed through the carriage entrance in the south-western wing of the building. As is documented in a vedutte of the town dated back to around 1665, there was an entrance into the building through a vaulted carriage entrance in the eastern wing contiguous of the garden as well. The garden facade was divided in its northern part by a ground-floor arcade (a photograph of the house no. 55 from the end of the 19th century documents the existence of three bricked up arcs). 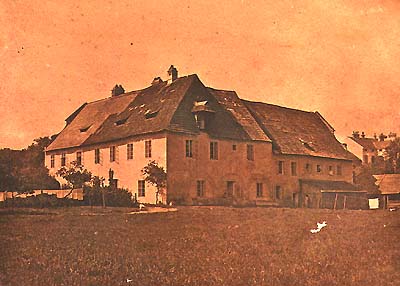 Former cemetery and cemetery of St. Martin's chapel (see St. Martin's chapel in the town of Český Krumlov):
Even though the cemetery was moved in 1892, we can still see the grounds break in the line of the former enclosure wall, opposite to the sport grounds in the north-east and along the axial path in the north-west. The original cemetery chapel was built as a wooden structure in 1585 as well as the new cemetery moved to this area from St. Vitus church. In 1618 a new chapel was to be raised, but due to the uprising of the Estates the prepared material was taken away and used to fortify the castle. The construction of the new St. Martin chapel began, then, in 1717 together with the completion of the construction of the chapel on Cross hill. At that time the Jesuits constructed a house for ill people near the chapel who accepted it as a shrine. The chapel was further reconstructed in 1737. The high altar dates to 1763 and was made by the Krumlov sculptor Josef Mucek and painters Josef Putz and Christoph Anneis. The altar of St. Martin's chapel was probably made by a native of Velešín, painter and priest Bedřich Kamarýt (1831-1911). The rococo pulpit was made by the painter and carver Anton Leyer. The side altars are consecrated to St. Jan Nepomucký and St. Anna. The chapel has been used by the Czechoslovakian Hussite church since 1969. The former cemetery of St. Martin chapel is a significant architectural element in the southern part of the Town Park.

The park wall along Linecká street:
Since the beginning of the 17th century the premises of the Jesuit residence have been surrounded by walls and fences. An anonymous vedutte dated between 1665 and 1670 shows a wall (with a marked crown) between Plešivec house no. 60 and the Vltava riverside, which also demarcated the area of St. Martin cemetery in the south. The 1819 vedutte (by J. Langweil, A. Langweil and J. Falta) shows the eastern part of the bounds of the former Jesuit premises in Plešivec as a fence made of pillars (assumedly stone) and fillings of planks - similar to the until recently existing fences in Novoměstská garden. Today's park wall along Linecká street, supplemented with a decorative grating fence, was installed at the time of the park's founding, around 1907. Its area respects the older historical parcelling of the area. The wall with grating ends approximately at the level of the edge of the yard sections of the house no. 61 in Linecká street. It continues towards the river in a form of the older rubble masonry wall.¨ 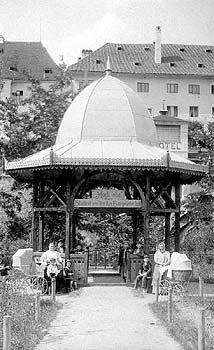 Friedrich Ludwig Jahn's monument:
This is located close to the circuit path along the river, approximately opposite the Růže hotel. Originally the monument was accessible from a now-disappeared separate footpath. This is a simple stone monumet consisting of erected granite free of stonework. Originally it was fitted with a bronze plaque with a relief of F.L. Jahn's (1778-1852) head and memorial text in the northern side. Both the relief and plaque were removed after 1945. The monument's original appearance is documented on photographs.

The First World War memorial:
Constructed in 1930. Stone pedestal and stele with names of the killed soldiers were topped with a sculpture of a soldier. Damaged first in 1945 (at that time the sculpture of a soldier was removed) and totally destroyed in the end of eighties during the erection of a nearby memorial "Victory and Fight Against Fascism". The remaining overground part of the memorial was transported to the premise of the municipal services in the end of eighties. The original monument appearance is documented on photographs.

The "Victory and Fight Against Fascism" memorial:
A tall stone stele is placed on a low pedestal. Figures expressing the ideological theme of the monument by its verticality and line modelling are engraved in a deep relief in simple sandstone block. The monument is supplemented with technical elements: spot lights, lamp poles and two flagpoles.