History of the monastery: 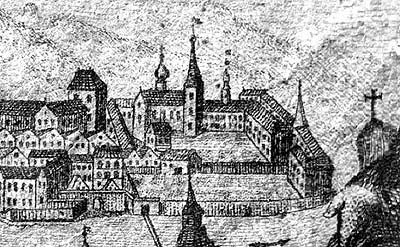 At present, the monastery belongs to the Order of Knights of the Cross with a red star, Prague.

Construction-historical development:
The gardens of the former Minorite monastery in Český Krumlov represented a type of classical Medieval monastery gardens by their structure. They included standard types of garden spaces such as the paradise garden, the orchard, the kitchen garden and the cemetery. According to the manners of that time, they had an especially practical character - they were the sources of fruits and vegetables for the livelihood of the monks, spices and herbs, and flowers for decoration of the church. In accordance with the rules of the life as a monk, it was necessary to presuppose the operational and compositional closeness of the monastery gardens disposition. The gardens, including the cemetery, were enclosed by a wall and closed by a gate - they were not just protected, but also sort of separated from the rest of the world. The Christian motive of cross repeatedly appeared in the garden, e.g. in the structure of paths and flower-beds. The wings of the monastery buildings, opened to the paradise court by the arcades of ambits, enclosed the square spaces, arranged as the "paradise gardens". There was a stone water reservoir in the centre of their area, to which led paths dividing the garden into four recurrent fields. There were grown herbs and flowers for decoration of the church on the flower-beds. At the same time, the grown flower carried symbolic meanings (white lily - purity of Virgin Mary, white rose - Virgin Mary as the Queen of heaven, red rose - shed blood of Jesus Christ...). 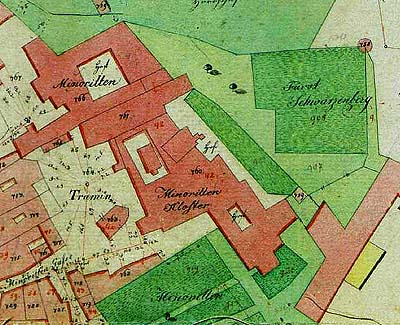 The cemeteries of the monks were inseparable parts of the monastery. In the case of the former Minorite monastery, the original cemetery was between the chapel of St. Anne and the chapel church (at the present court Tramín). We do not have any more accurate records about the likely arrangement of the area of the former cemetery. The fruit orchard was probably in the part of the garden between the present street Pivovarská ulice and the entrance gate to the monastery area long since. Its sufficient extent, and position to the sites of the world, prove this. Vine plant was also probably grown here, which later led to giving the neighbouring space of the monastery courtyard the name Tramín or Na Tramíně. A big stone water reservoir of a square ground plan was to be found in the centre of the orchard area (proved by the planned script of the conveyance building from the 8th August, 1898, kept in SOA Třeboň, division Český Krumlov).

The situation of the garden arbour to this part of the monastery area suggests that the orchard had reserved a part, aimed for rest and pleasure, known as the 'viridárium'. 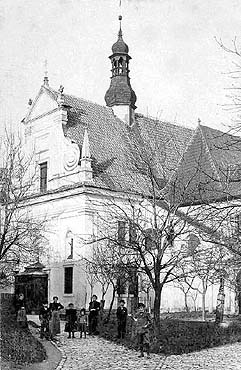 Interesting views to the silhouette of the ecclesiastic set of buildings in the present street Horní ulice and the chateau tower, opened from the area of the orchard. The orchard with the garden arbour was probably the most outspokenly shaped part of the Minorite gardens, in which the formal signs of the garden art style of the 18th century manifested themselves. The Rococo garden arbour was artistically the most valuable building. The arbour was built in 1758, the time when the clerical master-builder Josef Fortini participated in the building arrangements in the monastery, financed by Josef Adam from Schwarzenberg. The window and door openings were without any protection (!) at first, but later in the 18th century they were closed by window and door shutters. The west walls of the arbour are without the crown ledge, which indicates that the arbour used to be connected to the non-existing building - probably wood vaulted arbour. A certain poverty or rather ascetic way of the garden equipment (and in a bigger merit presented in the garden disposition of the neighbouring convent of the Clarissian nuns) corresponds to that of Franciscan monastic life. It is not therefore appropriate to compare, for example, the monastery gardens of Český Krumlov with the gardens of the rich Cistercian monastery in Zlatá Koruna. The Minorites did not need any special garden parts, ornamental beds of flowers, or even skittle for their contemplative way of life (the gold-crown skittle was the model for the similar one, created in 1746 in the gardens of Český Krumlov!). In the case of the monasteries of Český Krumlov, we do not find the rich and formally advanced garden arrangements which could be compared to the gold-crown Baroque garden (today unfortunately already ceased garden is nevertheless well evidenced by valuable iconography sources). The Minorite monastery gardens remained, at least in spirit, Medieval gardens, though there were some advanced development elements placed to their disposition. The inputting of the Baroque arbour to the Minorite garden, probably without the usual connection of this building to the compositional and operational relations systém, proves that the new style of the gardening art was accepted mostly externally.

The artistic development of the monastery gardens of the Minorite monastery in Český Krumlov was ended by its closing in 1782. The gardens, after the end of their original function, obtained mostly a useable character. The orchard was parcelled out to three renters. The area plan of the monastery from the time about the year 1900 shows the rectangular chessboard spread of the orchard to the more or less equal oblong areas. The shape of the courtyard Tramín from the time of World War I. is shown by the period pictures of picking up the military hospital patients. A big wooden cross with the sculpture of the Crucified was fastened on the wall of the convent of the Clarissian nuns with the front of the church of Boží Tělo. The cross was framed on each side by pillar thuyas. The area of the former cemetery was planted by fruit trees at the time. The picture show the courtyard with the plants of fruit trees. The whole space of the courtyard is densely planted by apple-trees, plum-trees and other fruit trees. From the same time origins the lime-tree (Tilia cordata) by the entrance gate on the courtyard and the two old horse chestnuts (Aesculus hippocastanum). Between the 20s and 30s of this century most of the fruit wooden species was cut out and substituted by planting decorative trees. The use of so called mourning wooden species (with overhanging frock) is characteristic - elm-trees (Ulmus glabra 'Pendula') and ash-tree (Fraxinus excelsior 'Pendula'), evoking the original function of the area as a cemetery. Sometimes between the 30s and 40s, the pyramidal poplar, rowan-tree, willows (Salix alba 'Tristis') were planted into the garden arrangement. The individual fruit trees (the walnut-tree in front of the church, apple trees, and so on) were kept on the courtyard till not long ago.

Further information:
The Minorite monastery in the town Český Krumlov