The cobblers Vyšší Brod in the 17th century 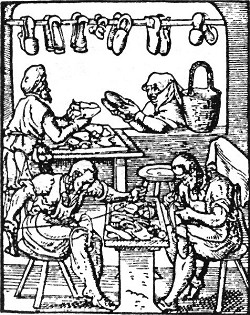 The name of first Vyšší Brod cobbler is introduced already in the year 1530 and it was Michel Piprl. After him we know Hermann Roselaw. From the year 1564 belonged Vyšší Brod cobblers under the cobbler-guild Rožmberk and on 24. May 1608 gave Petr Vok of Rožmberk to cobblers from town Vyšší Brod an independent guild order. Accurately is here identified the way of intaking the cobbler trainee: "who must be in front of opened cash chest accepted for three years", and that: "as he is educated and free, he has to wander for two years". Accordingly is here described an intaking of cobbler journeyman and identified, that weekly wages of cobbler journeyman shall be eight and wages of trainee four doits. Strictly was punished, that "master dabbled the crafts of another one".

Who wanted to become a cobbler master, had to first buy skins from cow and calve. These skins were looked-over the whole guild and judged, whether they are fit for a masterpiece. From cow's skin had to be done a pair of pelts with cockles, which were called "škorně" and belonged among the "long-term work". Then one had to make from cow skin the high lace-ups and three pairs of shoes sewn on sole. From a caltskin had to be made one pair of buskin up to knees, sewn into soles and twice quilted and one pair of female shoes with lace on metal rubs. It was controlled by masters of guild and "if the work was found suitable, the examinational passed". Then the cobbler was intaken as a new master and had to pay into the guild treasury six quids of wax and prepare for masters a good treat with four bucketfuls of beer, (what was roughly one hectolitre!). 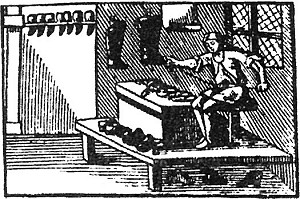 The guild order of Petr Vok of Rožmberk very highly preferred Vyšší Brod cobblers to foreign ones, specially, in case that one wanted to seat in Vyšší Brod or to sale his shoes. In guild order is written : "...strange or foreign master mustn't at the annual fair in Vyšší Brod unload and offer to sale his goods, as far as the local masters did not do so. If somebody from foreigns wanted to peddle his shoes, and got caught, shall him all shoes be confiscated and presented to local hospital for poor".

Meeting of the cobbler guild in Vyšší Brod was practised once a quarter and each cobbler "paid into a guild treasury one small rap". To the guild meeting nobody could enter with weapon and discourse with unfit words. To speak to auditorium the cobbler had to announce himself to the guil-master and in case, that he spoke falsify fables, he was had to pay fine of one quid of wax into the guild treasury. There was a lot of penalties, always accurately formalized. For example, when the cobbler did not come at holiday of St. Erhart into a church, he paid one quid of wax too. For the worst offences were to cobblers "their craft taken away, so they could not work any more. Till they compensate the damage."

In the year 1654 there were in Vyšší Brod 86 houses and at the same time the cobbler guild joined ten masters. Interesting are then shoe prices. "Škorně" cost fourscore of raps, female shoes about thirty, peasant shoes 60 raps and regular shoes about twenty raps. For comparison one three-score had 60 raps, one rap had seven coins or 14 hellers. The servant girl received for yearly work 90 raps, diets, shoes and two scarves, agricultural hirelings got during harvest two raps and diets, builders, slaters and carpenters were getting two raps per day, schoolmasters twelve-scores yearly. On the other hand a strike of rye (93 litres) cost two and half rap, "věrtel" of beer (over 23 litres) - seven raps, for one rap could one get about hundred eggs, one loaf of bread cost a coin, short jacket was for nine-scores - 180 raps. In short, shoes were very expensive and poor people used to be from spring till winter mostly barefooted.