The thought of connecting the Vltava river with the Dunaj river, the flow of two rivers which lead into different seas, came about in the middle of the 14th century, during the reign of emperor Karel IV. This water constructions, which were economically necessary, would make the Bohemian country an important cross roads not only on dry land, but also through water transport. The actualisation of this project only came towards the 18th century. At that time there was a shortage of timber inland, and the price of the timber was getting higher. The border regions of South Bohemia had massive sections of forests which were up to now, un-used, because access to them was not available. For this reason the Schwarzenberg canal was built, one of the most unusual water constructions of its time. The new water way enabled the floating of timber from the Šumava region to its place of transport in Vienna, which made possible to utilisation the natural rich resources of Šumava forests which were up to then inaccessible. 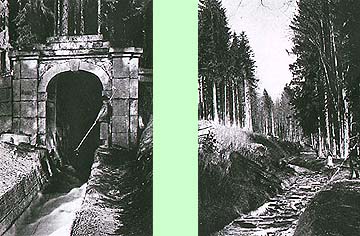 The project for the building of the navigational canal was prepared by Ing. Josef Rosenauer (1735-1804), an employee of the administrative office of the Schwarzenberg estates, with its base in Český Krumlov. In 1775 this builder presented a project to build a water way, on which felled timber logs would be floated down from the forests regions around St. Tomáš, Želnava, and Stožec. The planned canal was supposed to lead from the mouth of the stream Zwettelbach (Světlý potok - Light Stream) to the Grosse Mühl river near the Austrian town of Haslach, across the forests which belonged to the Austrian monastery of Drkolná (Schlägl) to the Bohemian country across the land which was in the ownership of the Schwarzenberg family, the region of Smrčina and Plechý (Plöckenstein) towards Jelení vrchy (Hirschperky). The final destination of the Rosenauer project was the stream of Světlá voda (Lichtwasser) not far from the 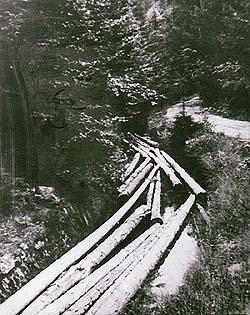 Bavarian border. Rosenauer's project of the new water way, brought surprise and alarm among people. In 1779 Johann zu Schwarzenberg the owner at that time gave approval to the project, but the actual work did not start for another ten years in 1789. At that time the exclusive rights, which were given to the bishop of Passau to floating timber on the Mühl river, which leads into the Dunaj river, came to an end, this was authorised by the emperor's patent and formed a necessary part of the plans for transporting timber from Šumava to Vienna. The right to transport timber was newly awarded to the duke of Schwarzenberg. Following this the land which belonged to the monastery of Drkolná were rented to the Schwarzenberg family, as they formed a necessary part of this new canal on the Austrian side of the border.

The building of the Schwarzenberg navigational canal went very quickly. During the first year a 29.3 km long section of the canal was built from the Zwettelbach stream to the Rasovka stream (Hefenkriegbach), which flows into the Vltava river near the village of Hory. In 1791 the navigational canal was built to the Jezerní stream, which flows out of the Plešné lake, and this became the reservoir for the necessary water flow during timber floating. In 1793 the trough of the canal was extended up to the Jelení stream near the settlement of Jelení Vrchy. This then ended the first section of the navigational canal, which was later called "the old canal" with a total length of 39.9 km. The building of the canal did not continue, because even Rosenauer himself had stated that he had doubts if the water from the reservoirs would be sufficient for the smooth function of the canal. In 1791 the first continuous flow of logs along the whole length of the canal took place. The free logs floated through the Schwarzenberg canal and on to the Mühl river up to Neuhausen, where an unloading canal with a dock for the boats was built. Before the mouth of the Mühl river to the Dunaj river, the logs were caught and loaded up onto a boat which took them to Vienna. With low transport costs the timber from Šumava was profitable sold on the markets of Vienna. 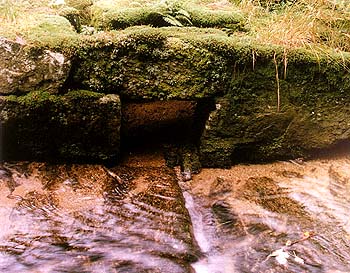 The prepared timber was accepted at the end of summer, because the timber had to be properly dried out before the commencement of the floating. Only good quality, straight and healthy logs were selected with a length of two and a half up to three feet. Timber that was partially rotten or branches were never used. The logs first of all had to be transported from the high mountain slopes down to the banks of the canal. Because the roads were not solidly built at that time, the timber was transported from the hills in winter time, when there was snow, with the help of hand sledges. The floating of the timber started in the spring, mostly towards the end of March or the beginning of April, when the melting snow filled up the supply channels with sufficient water.

The logs had to be thrown into the canal evenly, so that they did not pile up. The exact capacity of the trough of the canal had to be adhered to, the trough measured on the bottom 1.5 - 2 meters and on the top edge 3.5 - 4 meters. If the operation of the canal was running smoothly, there was a capacity of 900-1,000 feet of timber a day. About 200 people looked after the successful running of the canal, they removed piled up timber from the canal and other obstacles that may have come about. The floating came to an end when all the timber was through or if there was insufficient water. In this situation it was necessary to brake of the process and wait until there was more water after the rains. 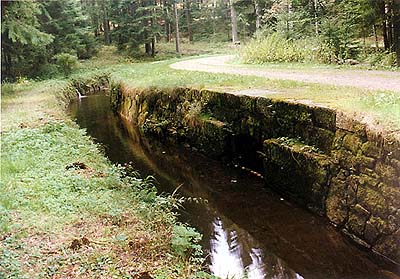 The increase in tree felling after the opening of the navigational canal brought to the region of upper Šumava more possibilities of work. For this reason forestry workers came here, mainly wood workers, who with their families set up new settlements with the approval of the nobility. During this time the villages of Huťský Dvůr, Nová Pec, Jelení Vrchy, Stožec, Nové Údolí and many more were established, with a typical style of mountain architecture of log houses.

The good consumption of timber and the increased requirement for this, supported the thought to finish the building of the navigational canal as per the original project, and therefore make accessible other areas of the forests for production. The second part of the canal from Jelení stream towards the Bavarian border under Třístoličník, including a 419 metres long tunnel above Jelení was built in 1821-1822. The building was carried out as per the Rosenaur's project, by the manager of the Schwarzenberg estates, Arnošt Mayer, engineers Josef Falta and Jan Kraus. The first voyage through the "new canal" took place in 1824. The total length of the water way after connection of both sections of the canal, went from the mouth of the Mühl river to the Dunaj river up to the Světlá stream, which was a total length of 89.7 km. The canal was fed by water from 21 streams. In 1835 a new reservoir called the little lake of Jelení was built to improve the flow of the water, and later on the reservoir of Rosenauer and the reservoir of Říjiště. Into the canal three water chutes entered, Jelení chute with a length of 1.3 km, Jezerní chute with a length of 0.9 km and Koňský chute which had a length of 1.4 km. The whole water project was complimented with 87 bridges and little bridges, 80 water sluices, 78 water ditches and 22 gates. 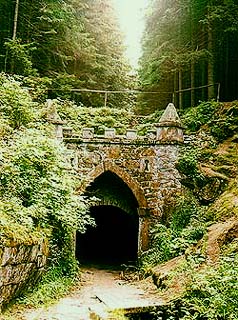 During the second half of the 19th century, the firewood was being pushed out by the increase in consumption of coal, and the felling of timber declined. At the same time there was an increase in demand for long timber logs. The Schwarzenberg navigational canal was not suitable for this type of timber, and therefore new form of transport and new outlets were looked for. A part of the canal between the Rakovka stream (Hefenkriegbach) and the stream of Světlá voda (Lichtwasser) on the Bavarian border was in 1887 adapted to enable the floating of whole tree trunks. This section which was 22.3 km long had bends altered so that tree trunks with length of 19.5 meters could go through it. From the navigational canal a chute was built which had a length of 3.8 km and was called the Hefenkriegský chute, which connected the trough of the canal near Želnava with the Vltava river and therefore enabled the navigation of timber from the surrounding forests to the Vltava. At that time a new reloading station was set up in Želnava, where logs were gathered which were transported down from the upper sections of the Vltava river and even the Schwarzenberg canal. In Želnava the logs were tied up into rafts, and floated down the Vltava river to Praha. 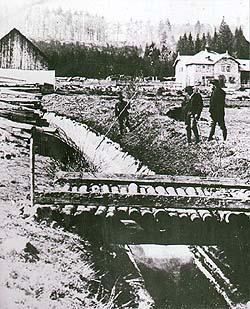 The timber from Šumava not only found good market in Praha, but also in Saxony and North Germany. The floating of the timber also continued through the Schwarzenberg canal and the Grosse Mühl river all the way to Austrian Haslach. The transportation of the timber from Haslach to Vienna finished in 1891 due to diminished demand.

The railway from Želnava - Český Krumlov - České Budějovice was completed in 1892, and meant a new and cheap form of transport for timber to all its destinations. The trunks of the Šumava giants were floating on the Vltava river as well as the Schwarzenberg navigational canal through the Hefenkriegský chute to the new railway reloading station in Želnava. Here they were reloaded to wagons and taken to their final destination. The extension to the railway from Volary across Nové Údolí to the Bavarian town of Heidmühle in 1910 enabled the easy and cheap transport of cut timber as well as long tree trunks from the least accessible sections of the Šumava forests. The railway finally won over the water transport. The floating of the timber through the Schwarzenberg canal slowly lost its importance and in 1916 last journey took place through the whole length of the canal.

Only a small section of the trough of the canal was used in the 20th century. The Želnava chute was used for timber up to 1962, when the canal definitely ceased to be used for its purpose. From 1963 the Schwarzenberg navigational canal is kept in the register of historical buildings of a technical nature. In the last few years attempts are being made to save at least part of this individual special technical work for the future generations. 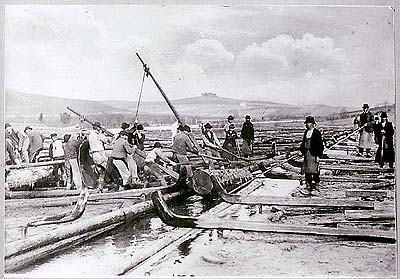