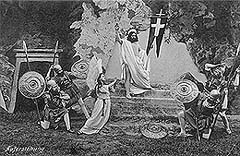 Motto: "Through the ways of long caravans falling into hot sand, we are travelling through Canaan to meet a light flickering in the distance..."

History of Hořice na Šumavě village
Hořice na Šumavě is one of the oldest settlements in the Český Krumlov region. The first written evidence went back to the 13th century. The vicarage of this village is mentioned in 1248. The village itself is mentioned in 1272, 1274 and 1281 in connection with changes in the ownership of the village. The owners, Lords from Kosova Hora, passed it over to Záviš z Falkenštejna and he passed it over to Vítek z Krumlova. 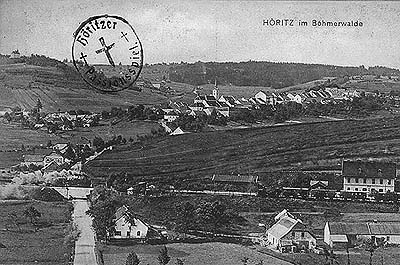 Other very important evidence of Hořice na Šumavě went back to 1290 - the Czech king Václav II certified a purchase of this village to the Cistercian monastery of Vyšší Brod. The village remained the part of the monastery estates until the middle of the 19th century.

The spiritual traditions and folk mysteries
The church administration stayed under Cistercians. And the oldest tradition of folk mysteries is connected with their work - these are the plays with devotional theme. They were plays with the themes from the Old Testament (Rajská Hra - Paradiesspiel - A Paradise Play) and also from the New Testament (Hra o Narození Krista - Christkindlspiel - A Play about Birth of Christ, Pastýřská Hra - with a parable about A Good Little Herdsman - Hirtenspiel). The most significant themes from the New Testament - life, suffering, death and resurrection of Christ - were the subject of the Passion plays.

Plays with devotional theme and especially passion plays are a very old phenomenon in Europe connected with a life of the Catholic church. An origin of mysteries is in Spain and France and they spread from these countries to other countries in Europe. Originally they were played in churches, but as the time went on they were enriched with popular symbols and they began to be played outside of the churches. 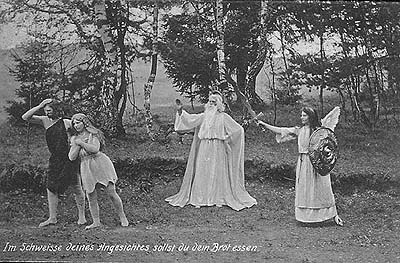 The wars were a negative influence on the development of the passion plays. In case of Hořice na Šumavě it was for example the Hussite war in the 15th century.

The Thirty Years´ War influenced spiritual life of people in the 17th century. It is interesting to know, that in the European context, in 1634 at the time of an extensive conflict, today´s world-famous passion plays in Oberammergau (Germany) are mentioned for the first time.

The beginning of the modern passion plays in Hořice na Šumavě
Old time mysteries in Šumava region were not only connected with Hořice. They were played in many other places in its neighbourhood as well as in distant places. But only in Hořice did this tradition not die. Popular devotion plays were very popular there and they enriched the life of local farmers, craftsmen, trades men and other people. It happened after the Napoleonic wars of 1816 that a weaver from Hořice Paul Gröllhesel with the help of a priest wrote a text of a passion story and together with another fifteen town-people from Hořice practised it and performed it. The play was called "Suffering and Death of our Jesus 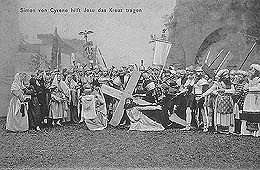 Christ - a Tragedy in Five Acts with a Curtain-raiser". Until 1887 the actors played it before Easter with some breaks and also with many changes. They played it outside the church, in pubs, many years without costumes and only with necessary stage props. In the eighties of the 19th century a local group of amateurs played the passion performances and the actors already had costumes. 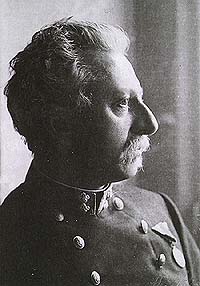 At that time an enthusiastic ethnographer and professor of the German grammar school in Český Krumlov called Josef Johann Ammann came to Hořice. He managed to get an original text of Grllhesl´s and he decided to changed the play so they could perform a new grandiose passion theatre. Ammann, who came from Tyrol, knew the passion performances played in Oberammergau and Brixlegg and he wanted to advanced the passion plays to their level. He managed to persuade not only people from Hořice to help but also a German club called Deutscher Bhmerwaldbund (established in 1884). With a lot of financial help from this club, a new theatre building was built in 1892 - 1893 and on June 25, 1893 the first night of a great passion play was given.

Since then the passion plays in Hořice became very famous. In first years they were held every year (1893, 1894, 1895, 1896). More then 80,000 people saw these plays during the first two years. The theatre auditorium was extended after the first year to an unbelievable capacity 2,000 seats. Also members of the imperial family, members of the famous aristocratic families, high church dignitaries and other significant personalities were among the visitors to the passion plays. In 1897 American film makers shot the first full-length film here. Until World War I the passion plays were held in 1898, 1903, 1908 and 1912. Other performances were played much later - in 1923 and then in 1927, 1930, 1933 and 1936. All of the performances were played in the German language. In 1923 the play was translated into the Czech language and it was published in book form six times. 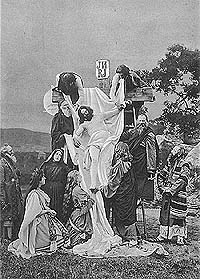 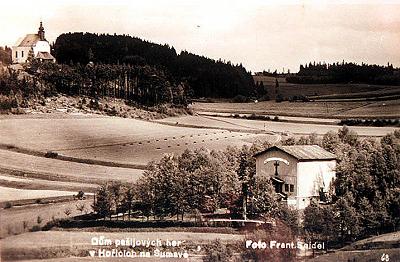 The Czech passion performances after 1945
New settlers came to the village. Under the lead of Jaroslav Tomáš Vetešník and a priest from Kájov Father Jan Václav Straka they decided to renew the tradition of pre-war passion plays. A new Czech translation of an old passion play was taken as a basis for the performance. This translation was made by Monsig. 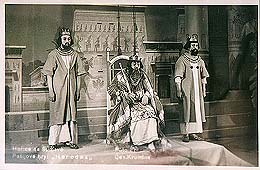 Antonín Melka. The Hořice inhabitants made the necessary reconstruction of the theatre building, the stage props and costumes. In the first rehearsal started already in 1946. The Czech passion performances were held in 1947 (at that time in their shortend form) and in 1948 and they were very successful. Twelve performances were played and according to those who remember the auditorium was always full.

The end of the passion plays after 1948
After 1948 the leading communist party did its best to prohibit the tradition of the passion plays in Hořice. The theatre building was used as a sheepfold and hay storage. Later the wooden building was taken down and in 1966 the walled parts of the building were demolished together with a pilgrimage church standing nearby. The old tradition has remained only from records and evidence in private and church collections and from depositories of archives and museums.

Renovation of the tradition of the passion plays after 1989
A change happened after November 1989. Thanks to relentless initiative of the first chairman of the village Ing. Miroslav Čuňák, who was elected in the first free elections, and many other enthusiastic people such as Ing. Karel Fila, and Růžena Hotová, the Society for Renovation of the Passion Plays in Hořice na Šumavě - Passion was established at the end of 1990.

And then the sequence of events was as follows: Jindřich Pecka, PhDr. wrote a new Czech passion play, a composer Jaroslav Krček wrote music and he prepared it with a music group called Musica Bohemica. An experienced director Antonín Bašta directed it and many amateurs were found in Hořice and its neighbourhood. The rehearsals began in June 1992 and it was not always easy work. A teacher from Hořice Alena Strašrybková draw the costumes and the women from the village sewed them with cloth donated by the Jitex Písek company. 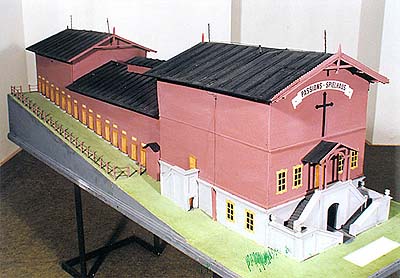 The question was - were to play. Instead of a roofed building the open-air scenery of a forest-park situated near the former theatre building was chosen. A college student designed an original roof of an auditorium and a scene situated on a wooded slope. Devoted people from Hořice worked on field work, built changing and sanitary rooms and they also built palisades for the audience of 500 people ...

And not just that. The Passion Society managed to contact many home and foreign colleagues and donors. Among those the most important are contacts with the friends from foreign passion societies. Thanks to them Hořice na Šumavě took a place of honour in an international society called EUROPASSION. In particular it is necessary to mention connection with the passion society in St. Margarethen in Burgenland, Austria and many other (for example in Mettmach, Austria or Loudeac, France).

Passion plays in Hořice na Šumavě after 1993 - a way of hope
The modern history of the Czech passion plays in Hořice na Šumavě began with the first-night on June 29, 1993. During the first four years they had together 36 performances and about 10,000 people coming from the Czech Republic, Slovakia, Austria, Germany, France and other countries could see them. Among the visitors were also representatives of other passion societies from the whole Europe as well as representatives of public life. Not even the representatives of the church were missing: the Papal nuncio in the Czech Republic Giovanni Coppa, the archbishop of Praha cardinal Miroslav Vlk, bishop of České Budějovice Antonín Liška, general vicar of the České Budějovice diocese Václav Dvořák and many other.

Hořice and its passion plays were given a very important prize on February 1997. Its representatives received a Prize for development of the local citizens´ activities from the foundations Patria and A Place in the Heart in 1996. The whole ceremony was held in the Prague castle. Hořice became the first Prize winner of a competition of which there were 149 projects of "common" people who express their relationship to a place where they live with a particular activity.

The passion plays in Hořice na Šumavě do not only enrich the life of the people living in this village and its neighbourhood. Perceptive people from the Czech Republic and abroad are coming to this small Šumava village without any distinction between their nationalities and they let themselves be amused with a biblical story and this prove its understandability and the power of its message.

Come and see it too. Together with other visitors and the ensemble of fifty passion players in Hořice and take "a way that reached the stars" and leads "to a light that glares in the distance..."