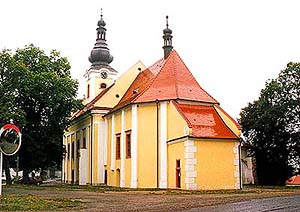 Location:
The Svatý Kámen pilgrimage church is located 1.5 km to the south-east of Rychnov nad Malší and 4 km to the north of the border crossing to Austria - Dolní Dvořiště / Wullowitz.

Origin of the Name:
The name Svatý Kámen (Holy Stone) was given to this place according to a legend and the Holy stone where the Holy Virgin allegedly appeared. The German name Maria Schnee beim Stein reflected consecration of the church to Panna Maria Sněžná (Virgin Mary of Snow). (Heiligen Stein)

Description of the Place:
The Svatý Kámen pilgrimage church is situated on a gentle hill-top of which the only way up is lined with six chapels. The Baroque church of Panna Maria Sněžná (Virgin Mary of Snow) is a single-nave church ended with three sided presbytery 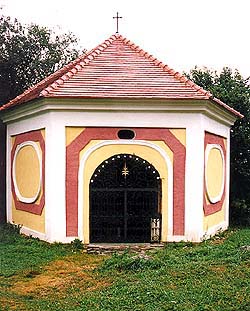 and a prismatic tower above the west front. The sacristy of the square plan is affiliated to the east side of the presbytery. The three sided chapel, where the Holy stone is placed, is adjacent to the north side of the aisle. The facade of the church is articulated with lisenas.

The interior of the church is vaulted with the cylindrical vault with sectors. Some parts of the painted decoration were preserved on this vault but they were repainted and later, during the reconstruction of the church, uncovered again. The Baroque furnishings from the 18th century was not preserved because all of the furniture was damaged or stolen.

The six sided chapel in the Baroque style is also part of the pilgrimage place. The chapel was built just above a medicinal spring. The chapel is situated not far from the north side of the church.

Architectural and Historical Development:
The pilgrimage place was founded by the Clare nuns of Český Krumlov who owned the land. In 1653 Abbess Kristina Pperlová built a simple chapel above the Holy stone. But it became very soon too small for the coming pilgrims. The Clare nuns began to build a big church consecrated to Panna Maria Sněžná. Also princess Anna Marie Braniborská from Eggenberg financially supported construction of the church. The construction dragged out until the first half of the 18th century when the north front side and the tower were finished. At the same time that the church was built, they began with the construction of a small monastery adjacent to the east side of the church. The monastery consisted of three arms of the ambulatory and simple one floor residential building with cells. The chapel above the spring was established in 1709. 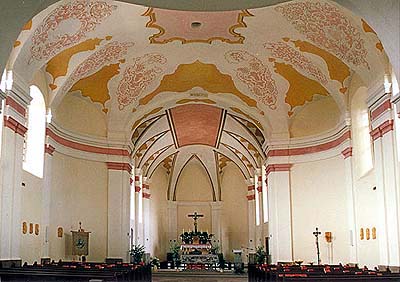 In 1949 the pilgrimage place was closed and it was devastated by the units of the frontier guard step-by-step. The furnishings were completely ruined and the monastery buildings were demolished in the seventies. After 1989 the extensive reconstruction of the pilgrimage church and the chapel began. It was supported by Austria and Germany. The ceremony of blessing of all buildings was hold in 1993. 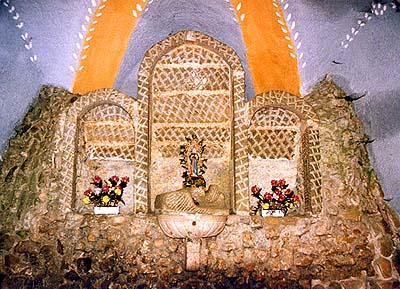 Significant Architectural Features:
The chapel by the north side of the aisle where the Holy stone with the sculpture of the Holy Virgin and sculptures of the Angels are placed is the most significant detail of this place.

History of the Pilgrimage Place:
The origin of the pilgrimage place Svatý Kámen went back to the first half of the 16th century. At that time the first legend telling about the stone divided into two parts and laying near Rychnov nad Malší appeared. According to the legend in 1500 the Holy Virgin surrounded with singing angels appeared in front of the shepherds at that place. The shepherds were said to divide the stone into two halves. The halves are all the time moving away from each other. When the space between them is as wide as a carriage full of hay it will be the end of the world.

The legends about the remarkable stone led the Clare nuns of Český Krumlov to the foundation of the Marion pilgrimage church in the 17th century. The 17th century is known as the century of extreme devoutness. Very soon the pilgrimage place had many of its supporters who gave lots of financial support and donations to it. It also happened that in 1778 the remains of saint virgin and female martyr Konkordie, placed in a decorated glass coffin, were moved to that pilgrimage church. Later on they were moved to the parish church in Bavorov.

The life in that pilgrimage place was touched negatively with the reforms of emperor Josef II. According to the reforms, the monastery of the Clare nuns in Český Krumlov, that owned the holy stone, was abolished. The pilgrimage church was as a result of that also closed for several years and later the spiritual administration fell to the Cistercians of Vyšší Brod monastery. From 1801 the rights over the church were given to the Schwarzenbergs who got them after the abolished monastery of the Clare nuns. In the forties of the 19th century 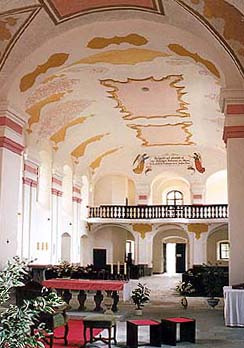 Tales and legends:
In 1634 a bricklayer from Rychnov nad Malší called Šimon Stepinger chopped down a tree growing near the Holy stone to have some wood for fuel. But when he made a fire of that tree at home his three years old daughter came to the fire so close that her dress inflamed. Despairing father of the heavily burnt child reproached himself that he chopped the tree on the holy place and he was very sorry for that. He ardently implored Panna Maria Těšitelka (Holy Virgin the Comforter) of grieved people to save his child. His prayer was heard and the daughter got well very soon. The news about that spread very quickly and people started to visit this holy stone and they pray the Holy Virgin for help.

Present use:
After reconstruction that was finished in 1993 it is a pilgrimage place again. The services for the pilgrims are there every Sunday from May to October.