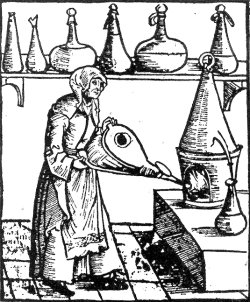 Among manuscripts of Vyšší Brod monasterial library can be found the oldest medical manuscript from 13th century "Remedium contra dolorem capitis", which betokens, that Monastery in Vyšší Brod had already organized the medical care not only for monks. In the year 1651, so closely after the end of the thirty years war, 29. Vyšší Brod abbot Georg III. Wendschuh decided to change an old abbey into a pharmacy. PhMr. Eve Laurinova wrote, that "it meant just new placing of chemist, because there already was a cloister apothecary". The oldest found pharmaceutical account from monasterial chemist is from the year 1652, when the apothecary was here Blažej Kutscher, who: "has been serving here two years already as an apothecary". Also this datum proves the existence of pharmacy here before year 1651, as well as number of medical and pharmaceutical books from 16th century today placed in monasterial library.

The meaning of Vyšší Brod monasterial chemist was above all that, that it supplied the medicines even to patients out of cloister. Quantity of medicines given to patients lines it to the big chemists. In a cloister used to be a doctor, what is documented in preserved index. The apothecaries from monasterial chemist had many suppliers and they were buying in Wels and Linz. They also had their continual herbewoman, who was out of base pay getting an "extra money for delivered herbs". The pharmacy supplied medicines not only to people, but also to cattle in the manor. When in years 1713 till 1714 broke out around the plague, the cloister not only closed its gates, there were also established the health patrols, arriving people were checked and "the apothecary was prepared for a quick help", what witnesses, that chemist served to broad surrounding. In the year 1773 operation was prohibited to all monasterial chemists. There were only two exemptions in Bohemia, namely monasterial chemists in Teplá and in Vyšší Brod. Since then was monasterial chemist in Vyšší Brod marked "c.k. privileged chemist".