History of Transportation in the Český Krumlov Region 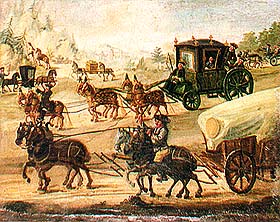 The Czech country until not long ago was interwoven by long distance trading paths, which connected the Czech country with other European countries. One of the first regular connections, which touched our land, was the mounted post "cursus publicis", which followed in the footsteps of Roman legions.

Already in the early medieval times, important land paths led through the border forests. At the beginning they were very narrow paths, over which only bearers or donkey tradesmen with goods could travel. Several main transport routes led through the countryside of Šumava, which connected the region of the Alps with the centre of the Czech country - Praha, and carried on to the Germanic countries, Poland, Russia and towards the Baltic sea. The foreign tradesmen carried mainly salt, cloth of high quality, wine, tropical fruits and other goods. From the Czech countries, on the other hand, we exported corn, animal stock, beer, fish, wax, honey and hand crafted products. The most renown became a path called "Via Aurea" - Zlatá Stezka (Golden Path), which connected the Bavarian town of Passau with Praha. The Archbishopric of Passau transported over the Zlatá Stezka caravans with salt, which went through the mountain region of Šumava across České Žleby, Soumarský Most, Volary, Hus castle and Libínské Sedlo into Prachatice. From there they headed across Vodňany and Písek to Praha. The Linecká path, Gmundenská, Vitorazská, Březnická and Vimperská path also played an important parts for foreign trade (History of Routes in the Český Krumlov Region, Salt Route). 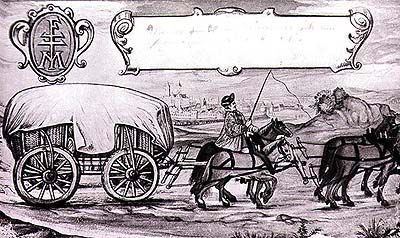 Settlements lying on the trade path became wealthy, and changed into exposition places and prosperous towns. With the increase of population the consumption of salt also increased. With the wealth of the aristocrats and burghers the demand for foreign goods also grew. The import of goods increased as well as the export, and the transport movement on the paths also increased. This required the building of better and wider roads, enabling the transport of goods on bigger carrier wagons. Existing roads which were finished only with turf or soil were only passable during good weather, and didn't support an increase in traffic. The cost of importing goods, toll charges, storage charges, bridge tolls, including own running costs of transport vehicles were the reasons for price increases. The speed and comfort of individual transport depended on the quality of horses, trailers and coaches.

The real development of infrastructure only started in the 18th century. The emperor Charles VI, had the main country roads be repaired. The empress Marie Terezie and her son Josef II paid attention to the development and building of roads, including a large amount of financial support. Postal wagons, 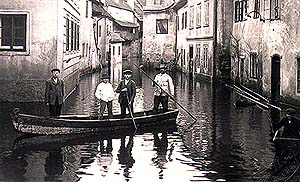 which were used for the transporting of post as well as people, started to travel over the roads at regular intervals. Certain parts of the road were marked by changeover stations, with amenities for travelling passengers, news and goods.

Another form of transport on offer was a passage on water. Boat transport could not influence, for long, the quality and speed of transportation, because only short stretches of the rivers were navigable throughout the year. The main artery for water transport in South Bohemia was the Vltava river. (Vltava River - Historical Communication Link in the Český Krumlov Region)

The rivers were mainly used for the transportation of logs from the massive forests in Šumava. At the beginning only the forests near to the Vltava river could be cut down, because further inland was not accessible by roads. Tree trunks were tied as rafts and floated down the river to places of trading in Praha. Part of the logs travelled by means of the waterway further on to Sasko, and north Germany (History of Rafting in the Český Krumlov Region). On the Vltava river, rafts even travelled during the 20th century (Last Rafts on the Vltava River). 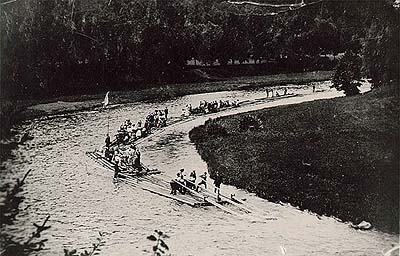 The thought of creating an artificial water way connecting the Vltava river with the Dunaj river already existed in the medieval times. The realisation of this plan came towards the end of the 18th century, when, on the suggestion of Josef Rosenauer the Schwarzenberg Navigational Canal was built. This enabled the floating of timber from uneconomical areas of the Šumava forests into the Grosse Műhl river in Austria, where the logs were loaded onto a boat and travelled along the Dunaj river 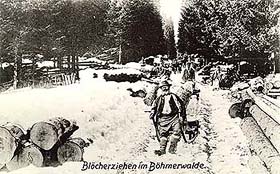 to Vienna (Schwarzenberg Navigational Canal). The Schwarzenberg navigational canal was used for the transport of timber for more than a hundred years, until it has been replaced by more efficient way of transportation - railway.

Predecessor to the steam railway was a Horse-drawn Railway. The first horse-drawn railway on the European continent connected the town of České Budějovice with Linz. It was supposed to assure the connection between the salt stores in České Budějovice with the Austrian town of Linz and Gmunden, which was the salt trading centre. The horse-drawn railway also enabled a faster, more comfortable and cheaper means of public transport.

One of the first steam railways in the region of the Czech countries was built in 1868, and connected the town of Plzeň with České Budějovice. Other railway connections in South Bohemia were delayed. Traffic on the route České Budějovice - Český Krumlov - Kájov - Želnava commenced in 1892. The following year trains started to run between Strakonice - Volyně - Vimperk and Číčenice - Vodňany - Prachatice - Volary. In 1900 the railway connection continued from Volary across Lenora into Vimperk. The line was only extended from Volary across Černý Kříž, to the Bavarian border town of Heidműhle in 1910 (History of Railway Transportation in the Český Krumlov Region). In 1911, transportation on the second electric railway began in South Bohemia, which connected Rybník and Lipno (Electric Railway Rybnik - Lipno). The railway network was not supplemented with new lines after 1911.