Location:
The Červený Dvůr castle is located 8 km to the north-west of Český Krumlov, on the south-east foothill of Kleť Hill near-by the road connecting Český Krumlov and Chvalšiny. It is situated 550 metres above sea level.

Origin of the Name:
It is said that the name of Červený Dvůr was not derived from the colour of the roof (as it was in the case of Červená Lhota castle) but it is only a mutilation of the German word to clear a place of something - before "rothen", now "roden". The so-called new yard of Chvalšiny was founded in the end of the 16th century probably on a cleared place. 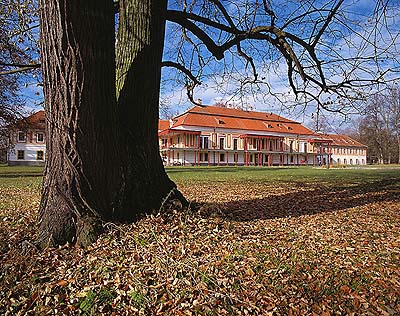 Description of the Place:
Now the spacious area consists of the castle building itself that together with adjacent out-buildings closes a big rectangular courtyard and further the remarkably spacious landscaped park ( Červený Dvůr Castle - Park) of an area of 15 hectares with a number of preserved garden buildings and fountains in the Romantic style. The Baroque castle is an rectangular, one-wing building, the front side is divided by a salience with a balcony, which ends in a triangular shield and is covered with an attic roof. The facade is articulated by lesenas. Cylindrical and groined vaults are on the ground floor, the room on the first floor has a flat ceiling.

Architectural and Historical Development:
The so-called new yard of Chvalšiny was the predecessor of the castle and it was founded by Wilhelm von Rosenberg at the foot of Blanský les (Blanský forest) in 1591. His brother and heir Peter Wok von Rosenberg established here in 1598 a new garden where beavers, pheasants, partridges and quails were bread in the same way as in a reserve. Marie Ernestine von Eggenberg, maiden name zu Schwarzenberg, ordered the building of the castle in 1672. In its north wing a chapel was made. During the last reconstruction a graffito decoration was uncovered in the facade of the middle part of the castle and also Renaissance frescos in one of the first floor rooms. We suppose that the construction in 1672 covered not only newly constructed Baroque castle but also the construction (or part of it) of the original Renaissance summer house of the Rosenbergs. The duke Adam Franz zu Schwarzenberg (1680 - 1732) had the roof of the castle covered with a pantiled roof. In 1736 water supply for the fountains was made in the castle garden. Between 1748 - 1749 a salla terrena (artificial cave) was built, it was decorated by the painter Josef Lederer (responsible for the decoration of the Masquerade hall in Český Krumlov castle). The castle chapel was decorated by the painter Schopper. Also the painters Aneis and Putz participated at that time in decoration of the castle. The so-called China hall with the Rococo wall paintings from 1756 is a work of art from the painter František Jakub Prokyš (apart from this he also painted the interior of the Bellarie summer-house in the Český Krumlov castle gardens). In 1779 - 1781 the 18 metres wide and 45 metres long castle of that time was extended by two 37 and 38 metres long and 11 metres wide side wings. It was almost the accomplishment of the constructional development of the castle building. A wooden veranda was built to the garden facade of the castle in 1836. It was in 1846 replaced with iron one, preserved to our times. 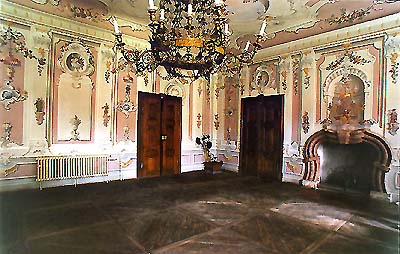 Significant Architectural Features:
We can consider some halls situated on the first floor as the most valuable. Firstly there is the so-called China hall (see above) and secondly two rooms decorated with Oriental paintings and stucco decoration. An interesting hall decorated with French wall papers from the 19th century has also been preserved. Within the castle garden area a tomb from 1841 called Waltersruhe (Saint Cross chapel) is situated.

History of the Place's Residents:
As it was already mentioned above, Červený Dvůr was originally owned by the Rosenbergs. In 1602 it was sold with all the estates of Český Krumlov to the emperor Rudolf II. von Habsburg and remained in the ownership of this family until 1622 when it was given by emperor Ferdinand II. von Habsburg to count Johann Ulrich von Eggenberg. He was at the same time risen to a duke state. Later in 1719 the Schwarzenbergs inherited the castle and also all the Český Krumlov estates. The Červený Dvůr castle went through the period of its highest prosperity under the rule of duke Josef Adam zu Schwarzenberg (1741 - 1782). The castle interiors were reconstructed in the Rococo style and also the castle park was charmingly rebuilt. The Červený Dvůr castle and especially the castle park had their second high period under the rule of duke Josef Adolf II. zu Schwarzenberg (1833 - 1888). He was influenced by his journeys to England where he was interested in, apart from the architecture, also in the so-called English parks. Apart from the romantic arrangement of the garden facade (building of a veranda) he spent time with changes of the regular French gardens into a landscaped park. The last owner was JUDr. Adolf, duke zu Schwarzenberg (1890 - 1950). The estates he owned were confiscated by the Gestapo in 1940. In May 1945 they were taken under the Czechoslovak national administration and with a special law from 1947 passed over to regional ownership. When the region order was cancelled the ownership of the estates was passed over to the Czechoslovak Republic.

Present use:
Today the castle is used as a mental hospital. It is specialising in alcoholism therapy and drugs dependence. Neither the castle nor the park are open to the public.