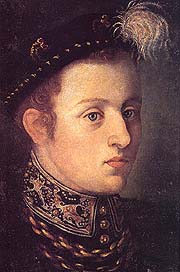 Wilhelm von Rosenberg was born on the 10th of March 1535 to Anna von Rosenberg, neé von Rogendorf and Jošt III von Rosenberg at the upper Austrian castle of Schützendorf. When his father died in 1539, Peter V von Rosenberg took over the administration of the Rosenberg dominion and the guardianship of Jošt´s descendants. He was educated at the private school of Arne Krajíř of Krajk in Mladá Boleslav and at a school at the bishopric in Passau where he stayed in 1544 - 1550 and where he encountered Renaissanece art for the first time. He acquired his first political experience at the Vienna court of emperor Ferdinand I von Habsburg. In 1551 Wilhelm, at the age of sixteen, assumed administration of the Rosenberg dominion. In the same year he made a chivalrous ride to Italy where he and some other prominent noblemen were to welcome a son of Ferdinand I, Maxmilian, and his wife. In several Italian towns he visited he was fascinated by Renaissance culture and the new style of life. 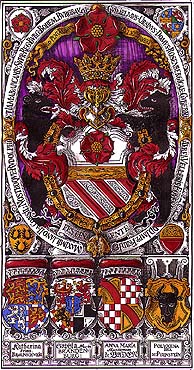 When he returned from Italy in 1552, he entered the world of official Czech politics through a dispute with the noblemen of Plavno over the prominent position among Czech noblemen. At that time Wilhelm enriched the Rosenberg Coat-of-arms with its red five-petalled rose by adding silver and red stripes with a golden beam, symbolizing their alleged relationship with the Italian family of Orsini. Since the time of Wilhelm´s rule bears have been bred at the castle of Český Krumlov as they were to have confirmed the noble origin of the family - Orsa means "she-bear" in Italian (see History of Bear Keeping at Český Krumlov Castle).

In February 1557 he married Katherine of Brunschwig who died at the beginning of May 1559 at a premature birth. He married for the second time in 1561 in Berlin, to Sophie von Branibor who died in Český Krumlov very early, too - in June 1564.

In 1566 he was commissioned as the leading officer of Czech troops which were to intervene in battles against the Turks in Hungary - Hungary had been tormented by Turkish invasions for the whole 16th century. In 1570 he achieved the peak of his political career that could be achieved by a nobleman in Czech lands at that time. He then reached the zenith of his diplomatic career in 1572 - 1573 when he was appointed by the Habsburgs to lead the negotiations over the Polish throne and gained the affection of Polish noblemen and was himself nominated as a candidate for the Polish throne.

In 1578 he married for the third time, to Anna Marie von Rosenberg neé von Baden. Their great wedding took place in January 1578 at the castle of Český Krumlov. Ann Mary died in April 1583 and her corpse is placed in the St. Vitus Church in Český Krumlov. 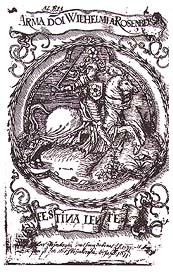 In the 1580's Wilhelm had a Jesuit college built ( Horní No. 154). In 1585 he was awarded the highest imperial honour for Catholic noblemen in the cathedral of St. Vitus in Prague - the Order of the Golden Fleece which he was conferred by the king of Spain, Philip II.

At the beginning of the year 1587 he got married for the last time, to Polyxena von Rosenberg, neé von Pernstein. This marriage was also childless and so Wilhelm did not have any descendant from his four marriages. Consequently, after his death on the 31st of August 1592, reign over the Rosenberg dominion passed over to his brother Peter Wok von Rosenberg. Wilhelm´s corpse is placed in the St. Vitus Church in Český Krumlov.

Wilhelm von Rosenberg also looked after the economical development of his dominion where he relied on his regent Jakub Krčín z Jelčan who continued the activity of the famous Rosenberg fish farmer Štěpánek Netolický. Apart from the ponds in the Třeboň area, Krčín built farmyards and sheepfolds, seigniorial mills and breweries, silver mines and glassworks. At the end of Wilhelm´s life there were about 12 170 people settled in the Rosenberg dominion. 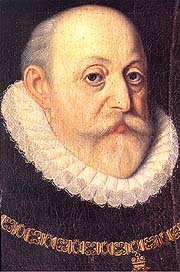 Wilhelm was trying to rebuild the castle of Český Krumlov into a Renaissance residential palace that would be worthy of his position and sphere of influence. He built a Renaissance castle tower (Castle No. 59 - Castle Tower) that became the dominant feature of both the castle and the town itself. On the Renaissance Remodelings of Český Krumlov Castle Italian architects Antonín Ericer Vlach and Baldassare Maggi of Arogn as well as painter Gabriel de Blonde participated, whose frescoes adorned the courtyard and private rooms of Wilhelm von Rosenberg (see Renaissance Rooms in Český Krumlov Castle). Near Netolice he built his summerhouse Kratochvíle based on Italian models. At his court we would have found many musicians, painters and also less trustworthy alchemists like Edward Kelley or John Dee, who were active in the Třeboň area, or Antonín Michael of Ebbersbach who was active in Český Krumlov.