Náměstí Svornosti:
The first written mention is dated from 1443 when the square was known as the market-place. This term was used even in the 16th century and in the first half of the 17th century. Afterwards the square was renamed in German - the Ringplatz and was called by this name even in 1915. At present it is stated as náměstí Svornosti (Square of Svornosti) The word svornost in Czech signifies union, accord. 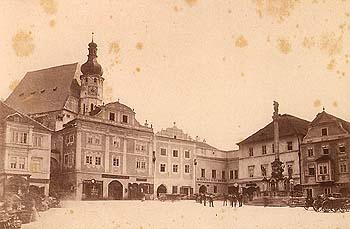 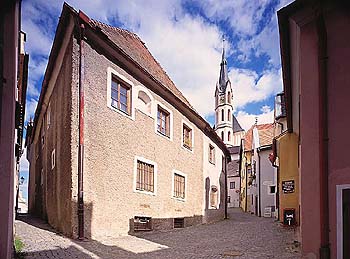 Šatlavská ulice:
From the 16th century this street was called the houses behind the old Rathaus (old town hall square No.3) then as the Frohnfestgasse in 19th century. In 1915 it was known under the name of Frohnfestgasse (Frohnvest - public prison). Since 1918 it has been known as Šatlavská ulice. Šatlava is an old term for jail in Czech.

Radniční ulice:
Between the 16th and 17th centuries it was called the street from Latrán to the market-place or from the market-place to Latrán by walking. From the 18th until the beginning of the 19th century it was called the Kasgasse. From the end of 19th century until 1915 it was known as the Rathausgasse, then since 1918 has been known as ulice Radniční, or Town Hall St.

Masná ulice:
From the 16th to 17th century it was called the houses at meat shops ( History of Meat Market in Český Krumlov) then as the Fleischgasse in the 19th century. Under this name it was known even in 1915. Afterwards it was, and is, known as Masná ulice, which translates into Butcher's St.

Na louži:
At the beginning of 16th century this name occured for houses No. 54, 67, 68. Around about 1900 the street was called Dr. Nitscheplatz (in honour of Dr. Friedrich Nitzche, the notary in Vyšší Brod, a deputy and honoured man in his time). In 1915 it was known as the Dr. Nitscheplatz. Since 1918 it has been stated as Na louži. The name in Czech literally means "on the puddle". 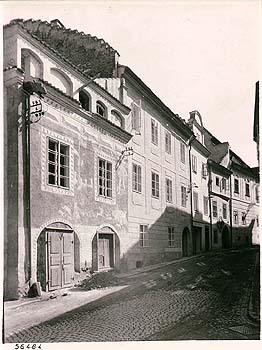 Široká ulice:
Between the 16th and 17th centuries it was called the lowland or back street, from 18th century it was known as the Breitegasse, and under this name it was stated even in 1915. Afterwards it was known as Široká ulice, Wide St.

Dlouhá ulice:
In the 16th century it was thought of as a continuation of Široká ulice (respectively lowland or back street). Between the 18th and 19th centuries it was known as Langegasse. Between 1902-1920 it was called Franz Khemeter Gasse (in honour of a chairman of Český Krumlov). After 1920 it is stated under the name Dlouhá ulice, Long St.

Soukenická ulice:
In the 16th century it was called the middle street then between the 18th and 19th centuries as Tuchmachergasse, even by this name in 1915. Then the name of Soukenická ulice, Draper's St., was stated. 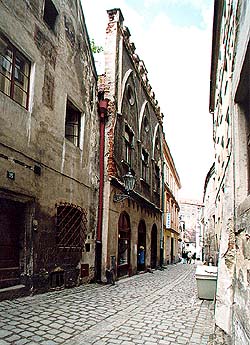 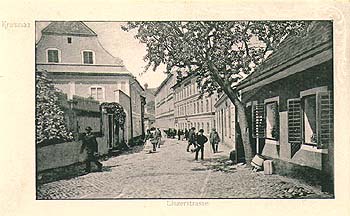 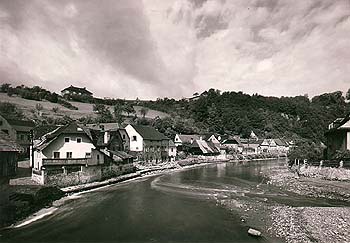 Plešivec:
This is a suburb as well as a street. From the 16th century it was known as Plešivec or Flechberg. In 1915 it was stated under the name of Flossberg, today as Plešivec. The word has a connotation towards bald-headedness.


Latrán:
This is a suburb as well as a street. The first mention was noted in a land and duties register of Rosenberg from the 1370's. It used to be stated in Czech as Latrán or in German as Latron by turns.

Zámecké schody:
In the 16th century they were called the Hofperk, then as the Schlosstiege in the 19th century and as the Hofstiege in 1915. Afterwards they were known as Zámecké schody, meaning Castle Stairs.


Nové Město:
The name occured in 15th century . In German it is called the Neustadt (New Town). 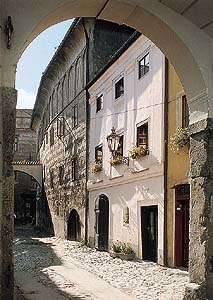 Klášterní:
The street didn't have its own name until the beginning of the 20th century. In 1915 it was stated under a name the Turkowizergasse (in honour of Austrian priest who was in service also in Český Krumlov who used to make financial donations to support poor students). Since 1918 it has been known as Klášterní ulice (Church St.).