After the American Army liberated Česky Krumlov in May of 1945, a "Local Administration Committee" official Mr. Antonín Zwiefelhofer gathered amateur theater lovers and founded an ensemble called "Českokrumlovska scéna" in June. Mr. Václav Korbel became its first chairman. Its members have been contributing to the cultural and social life development of the town, district and even the region. In 1995 it celebrated 50 years of its existence. Therefore, it has been around for 53 years in 1998 and in the course of that period of time has had over 236 members; 116 women and 120 men. They gave 159 premiers of 108 dramas, 22 fairy tales, 15 cabarets, 9 operas and 5 operettas. 586 performances had a run of 427 repeats led by 28 directors. However, this is not just statistical fact statement; this is to consider how many hours, nights and how much effort it cost to reach such results. Thanks to Českokrumlovska scéna, the audience was able to experience plays of many foreign and local authors such as Moliëre's "Lakomec" (Harpagon) , "Scapin's Waggery", Goldoni's "Fathers-In-Law", "Mirandolina", Lope de Vega's "Farmer To Be His Own Man" "Loving To Death", H. de Balzac's "Eugenie Grandet", O.Wilde's "The Importance of Being Ernest", K. Čapek's "RUR", "Makropulos Thing", V. Dyk's "Ahasver", V. Nezval's " Manon Lescaut", J. Vrchlický's "A Night At Karlštejn" performed on the castle yard, etc. 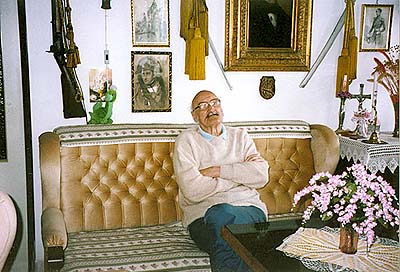 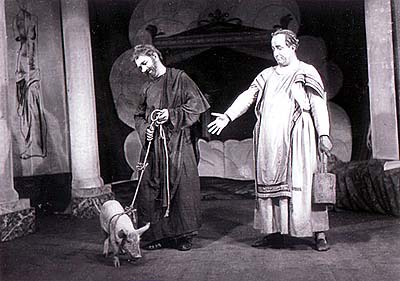 Members of "Českokrumlovska scéna" attended every domestic and foreign film shooting. They also participated in the construction of the Revolving Auditorium. Many of them succeeded in professional theater or ballet ensembles.

Českokrumlovská scéna also possessed a ballet ensemble directed by Máša Bokrova, a ballerina from Česke Budějovice. The ensemble took part in concerts organized for "Slavností pětilisté růže" (Festival of the Five-petalled Rose) in the Masquerade Hall in the castle.

In 1968 a couple Antonín and Zdena Zwiefelhofers wrote a screenplay for the "Slavnosti Pětilisté růže" and so became its founders. The event was held in 1968, 1969 and 1970. Further festivals were prohibited by the communist government for inappropriate ideology. All ensemble members used to attend the event. They played the parts of the Vitkovci, Rosenberg, Habsburg, Eggenberg and Schwarzenberg dynasties. Other approximately 800 extras were played by inhabitants of the town and soldiers themselves. The event was focused mainly on tourism refreshment in town. The organizers contacted "Znojemske vinobraní" (Vintage in Znojmo) and the whole ensemble was invited there to play a costume group from the Renaissance period, Wilhelm and Petr Vok von Rosenberg, and to represent the town as well.

For the purpose of that even, A.Zwiefelhofer wrote a play named "Poslední Rožmberk" (The Last Rosenberg) which was planned to be performed in 1971 with the cooperation of writer Nina Bonhardova. However, since the event was prohibited the play has never been performed.

In 1970, Antonín Zwiefelhofer was awarded "Pamětní plaketa I. stupně za zásluhy a rozvoj města Český Krumlov" (1st Grade Commemorative plaque for merits of development of Český Krumlov) for his general activity and especially for his contribution to the foundation of "Slavnosti pětilisté růže". 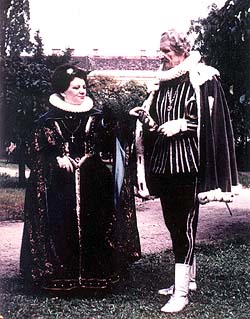 Manager of Meiningen's theater praised the event as: "...the event was just magnificent. We were amazed at the level your amateur ensembles have. We did not even realize where the dancing ensembles were professional or amateur".

In 1971, the Town Theater, which was one of the oldest theaters in Central Europe, was closed down for reconstruction. Unfortunately it never happened and became a part of the Hotel Růže. The ensemble then gave performances in a former restaurant in Horní Brána and later on in "Luna" youth club. Its activity slowly declined - there was not space to play.