Description of the bulding
The two floor building of the former church of St. Jošt is covered by a steep saddle-roof covered with guttertiles and has a five-floor tower with a cupola ended with a lantern. On the front side leading into Latrán street Renaissance granite rests are projected from the wall. An empty niche where a sculpture of the Madonna from 1678 was previously placed is above of one of the exits.

Historical development of the construction
Formerly on the site was a chapel or little church of St. Jošt. The church was established before 1334 by Peter I. von Rosenberg, and was a part of the Rosenbergs´ hospital (Latrán No. 13). The building remains with the preserved Gothic constructions and details (the north front side of the church, the top of the original church preserved in the loft of a neighbouring house Latrán No. 2, the north entrance broken portal from the adjacent aisle of the same house). After 1546 probably Anna von Rosenberg, geb. von Rogendorf took the church under her patronage and when she died in 1562 her son, Wilhelm von Rosengerg did not give back the church and pension. In 1596 Peter Wok von Rosenberg began a reconstruction of the church in Renaissance style according to the designs of an architect Domenico Benedetto Cometta of Eckthurn. This reconstruction remarkably changed the whole church. It took the appearance of an asymmetrical two nave church with a choir placed above a narrower south nave. In 1598 the church, newly consecrated to The Holy Trinity, was given to the Protestants in Český Krumlov. Because many German speaking people were coming to Český Krumlov to settle here and were mostly not of the Catholic religion, even before the middle of the 16th century the sermons were given in German. The church was also used by the members of the Unitas Fratrum, whose supporter was Peter Wok von Rosenberg. Since November 1598 an evangelical priest Andreas Baudisius preached here but because the Prague archbishop wasn't pleased with this, he was replaced in 1599. A year later emperor Rudolf II. von Habsburg strictly forbade use of the church for non-Catholic purposes. When Kateřina z Ludanic, wife of Peter Wok von Rosenberk, who was Lutheran, died in 1601, her remains were placed for a short period of time in this church and later on were moved to the Rosenbergs´ crypt in the monastery Vyšší Brod. 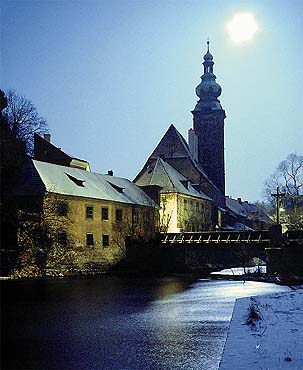 When the last Rosenberg left Český Krumlov for Třeboň in 1602, the church was passed over to the local Jesuits to preach there in German. In 1615 (or 1621?) the church was consecrated to St. Jošt and St. Anna again as a "German church". The Jesuits had administration over this church until 1773 when their religious order was dissolved. Afterwards the administration was passed over to the prelate parish office. In 1787 at the time of the reforms of Josef II. the church was closed down, and all of the church's furnishings were given to the other churches in the Český Krumlov region. So it happened that also the bells, made in the end of the 16th century, were moved to Hodňov and Slavkov. The bell in Hodňov was made by a bell-founder Brikcí from Cinperk in 1590 in Kratochvíle, probably on Wilhelm von Rosenberg's request - his coat-of-arms is on the bell. The other bell, placed in Slavkov, probably also comes from the workshop of Brikcí from Cinperk and it was made at the same time. Unfortunately, it was destroyed during a great fire in 1817. 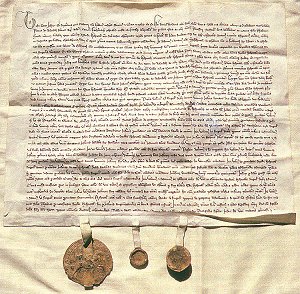 In 1790 the municipal council of Český Krumlov sold the building in auction for 1245 gold coins to the townsman Kašpar Koutný. The tower was passed over to town ownership. Koutný immediately sold the building to two companions, a businessman Klement Pschl and a hatter Karel Neumller who rebuilt it into a burgher house with a brewing privileges. In 1765 the front side as well as the top of the tower were reconstructed and during the reconstruction in 1790 - 1791 the presbytery was destroyed with a linking block of entrance aisle built in its place. The cellars were newly built and the level of the ground floor was lifted. In 1802 Karel Neumller got the whole building and he rebuilt it into a casino where a bar and a dancing hall were situated on the first floor. A terrace on the side leading to the Vltava river was also built at that time. After 1900 the house was used only as a residential accommodation. Around 1920 the Baťa shoe firm made a shop there and in 1938 a store for a bike and motorcycle shop was built on the side to the Vltava river. In 1937 the north front side leading to the street was reconstructed.

In spite of all these reconstructions, some parts of the former Gothic church were preserved. Except for the above mentioned Gothic front side, broken portal and fronton we can see the original round ridge vaults of a space under the choir on the ground floor on the side to the river, and the original vaults of the church with the stucco ribs were preserved on the second original floor. The original pedestal of the pillars are still recognisable in the cellars.

Development of south facade of nave and tower:
There were not any discoveries from the Middle Ages phase. In the Renaissance period the building was radicallly rebuilt and changed into a dissymetric double-nave, a four-storey tower was newly built. The south facade was articulated with two lines of windows framed by the mounts.The lower windows had stone jambs with a middle pointed up column dividing each hole. 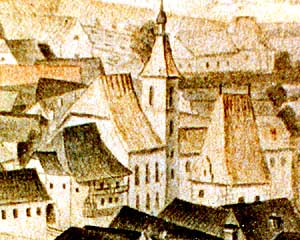 The top holes without any stone elements were finished by the brick segment curse. Plaster surfaces covered with a rough plaster were smooth by a trowel edge, the coloured paint did not appeared, only some ochre and red-coloured hue fragments were uncovered. In the Baroque period, 1708 -9 (it may have been connected with the restoration of the neighbouring hospital), the church was newly plastered and the all-surface grey-coloured paint was applied. In the late Baroque period, 1756, they built on the 5th floor of the tower and the pilasters were finished by the decorative capitals ans stucco mascarones.

The tower, as a dominant panoramatic element of the hospital, was articulated with a grey-and white-coloured scheme, the south facade of the nave was left without a tectonic articulation, with the use of the all-surface paint. In 1787 the church was abolished and the building was rebuilt into flats. The south front was adapted by a ground floor building, courtyard galleries, couples of windows were fixed into the large church window holes. Two massive chimneys articulated the saddle roof with the Renaissance timber- work of a roof. The south front of the nave was newly plastered with the presentation of ochre, grey and green-coloured paint.

The tower was probably left without any restoration work. In the second half of 19th century the top window holes of the south nave front were unified. In 1924 the complete restoration of the facade was done with the use of the grey-and-white-coloured tectonic sheme. The pre-wall restoration was the inspiration for the facade restoration done in 1998-99, the ochre and red-coloured paint used in the top part of the tower was added to the grey-and-white-coloured scheme. The tower facade was covered with the silicate paint, the nave with the lime paint. 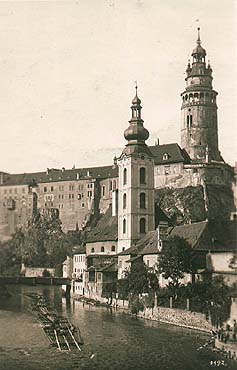