Picturesque Český Krumlov reminds one of a fabulous theater scene. Whoever may see it lit up in a summer evening atmosphere catches a feeling of unreality and the impression that it's all built up like theater scenes and decorations. Places created just to perform a theater play could be found in every corner of this beautiful town. Český Krumlov is one big stage.

Karel Konstantin, the first South-Bohemian Theater director during 1947 - 1949, was the first to realize this possibility on a larger scale. It was he who came up with the idea to organize the South-Bohemian Theatrical Festival. The first year was not yet exclusively held just in the Castle Park; several performances directed by Karel Konstantin took place on the stage by Joan Brehms: three performances of "Singing Venice" by Hoffmeister took place in front of the Summer Manor Bellarie, and so were four performances of Shakespeare's "Twelve Nights". Visitors (approximately 1500 seats) always left with absolutely fabulous impressions.

The second year of the South-Bohemian Theatrical Festival was held, in addition to České Budějovice, Písek and Třeboň, also in the Castle Park in Český Krumlov. The space in front of the Summer Bellarie Manor was utilized again: two performances of "Lucerna" (The Lantern) by Alois Jirásek and one performance of Shakespeare's "The Merchant of Venice" were introduced here. However, this time Konstantin arranged five truly outstanding performances of Shakespeare's "A Midsummer Night's Dream" which were played in front of the cascade fountain.

The third year of the festival was delayed for ten years. The person that takes the greatest credit for the festival's resurrection and theater performances as well was undoubtedly a former director of the South-Bohemian Theater, Otto Haas. Under his leadership, the 3rd festival represented a turning point in the fifty-year history of South-Bohemian theatrical festival events in Český Krumlov. This year was concentrated into Český Krumlov only and set up very demanding artistic and especially organizational targets. The festival was held from the 7th to 15th of June 1958. Various plays were given every day, and at least two of them were of key importance for the future festival conception. In July 9th ,1958, an experimental performance of "Lost Face" by Weisenborn was given for a small group of VIP´s at the first and then still primitive open-air revolving auditorium. Haas's described his objective: "...we want to spread the action scene upon a wide screen around the stage. We are getting numerous wonderful opportunities with dimensions still unknown, from close detail up to pushing the scenes farther into the distance where one gets close to the magnificence of the nature".

The 3rd South-Bohemian Theatrical Festival also showed operettas like "Madame Favart" /Offenbach/, "Fireworks" /Burkhardt/, an opera "Jacobean" by A. Dvořák, Astafjev's ballet "Bakhchisaray Fountain", and Schiller's drama "Fiesco and His Genovian Plot". The "Lost Face" was performed twice on the revolving auditorium. Otto Haas went on. It was perhaps the first time in this century when a theater performance was given in the Castle Baroque Theater. It was an unforgettable experience and has still remained in memories of those who saw it. In the middle of ancient stage scenes, first night opening tones of Rossini's comic opera "Signor Brush" sounded out in June 15th, 1958 /directed by Otto Haas and conducted by Jan Hus Tichý, the conductor of the National Theater in Prague/.

Besides Rossini's play "Signor Brush", Mozart's "Figaro's Wedding" was given at the Castle Baroque Theater. In the same year, a guest performance of a German group from Meinigen (Germany) showed "Fidelio" by L. van Beethoven in the second Castle's courtyard. The National Theater from Prague gave a guest performance of "Marysha" by Mrštík' Bros. and Puccini´s "Boheme". 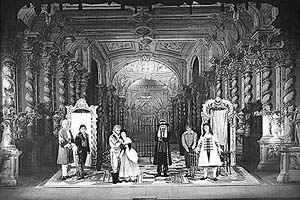 "Barbiere de Sevilla" was introduced at the Baroque Castle Theater in 1960. One year later, Moliere´s "Tartuffe" reached a record 15 performances on the same stage.

In 1963, a Merivaux's play "Game of Love and Coincidence" was introduced in the Castle Masquerade Hall. The last performance given in the Castle Baroque theater was in 1965, "White Devil" by Merle (6 times) and "La Traviata" by Verdi (5 times).

The following years of the festival took place mainly either on the open-air revolving auditorium which consequently underwent numerous technical and outlook arrangements, or in the Masquerade Hall. During 1959 - 1979, almost all the performances were given in the open-air revolving auditorium. A total of 1299 performances were given during that period, and watched by 899.314 visitors. 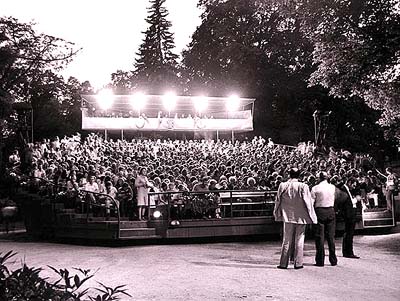 In 1981, the poor condition of the open-air revolving auditorium diverted the festival orientation to the opera performances given mainly in the Masquerade Hall and partly in the open-air theater in Trocnov.

Before the theater closed down in 1988, the average number of performances given was 74, and the annual number of visitors reached up to 62.000 watchers.

The South-Bohemian Theater opened the new stage in July 2, 1993, with the opera "Village Singer" by Fioravanti.

Since 1994, the South-Bohemian Theater has been operating the revolving auditorium, which is actually owned by the Municipal Council in České Budějovice. In 1998 the open-air theater revolving auditorium become government property, and optimum forms of theatre operation are still being sought out which would match the requirements of the historically protected environment of the Castle Gardens in Český Krumlov.