History of Cinema in Český Krumlov

Only four years after the founding of the first steady cinema in Prague by Dismas Šlambor, alias Viktor Ponrepo, another cinema came into existence in Český Krumlov thanks to Ludvík Lep, an enthusiastic amateur in a newly originated film industry, who passed the examinations in projector attending in Vienna.

The permission to establish a steady cinema together with an operational licence were granted to him by the State Governor´s Office in Prague on 30th August 1911. Ludvík Lep established the cinema hall in a little rented hall in the Nová hospoda, New Inn, at the 2 Horní Brána, Upper Gate, in Český Krumlov (today´s Town Theater). The most important object of this place of entertainment was a projector, a 1909 Pathé Apparat with production number 12-299.

The premier showings took place between the 20th and 26th of August 1911. The first known programme is dated 28th October 1911; the audience could see copies of a Trip to the Coast of New Zealand, the drama Seduced Pierrot, the comedy Neighbour and Neighbouress, the drama Fatal Resemblance and the comedies Boozer´s Adventure and Lotynka´s Yacht. Those short silent films, probably most of all of German origin, were accompanied with musical pieces, which was a usual practice during the whole period of presenting silent films in the cinema of Český Krumlov.

The foundation of the Czechoslovak Republic in 1918 brought certain changes to the film industry as well. Lep´s German cinema continued to screen after 1918, and his licence was regularly revalidated. Apart from this cinema a Czech cinema, whose operator became the local department of the National Association of Šumava, came into existence in Český Krumlov. It was licensed on 17th February 1921. In practice, the operation of this cinema was all along tightly connected with Ludvík Lep´s cinema whose hall and technical equipment were used for screening. The first films screened under its licence, were as follows: Black Jaegers, The Plains of the Tatras and Štrbské Mountain Lake. The showing took place on 21st November 1921.

Unlike the regular operation of Lep´s German cinema, the minority-run Czech cinema presented films irregularly with rather long discontinuations; it, however, was in operation until 1938.

The operation of both Český Krumlov cinemas was put to an end in the period from the 30th of September 1938 to March of 1939 as a result of Český Krumlov not being a part of the Czechoslovak Republic. Lep´s cinema stopped screening in March 1939 when he was prohibited to screen films by the German authorities - he was not a member of the Reich's Film Chamber.

Between 1974 and 1976 a new cinema called "Družba Cinema" was built. In a campaign of voluntary work called "Action Z ", local inhabitants worked over 120 000 voluntary hours on its construction. The project was implemented according to the architectonic design made by Ing. arch. Bohumil Böhm. A part of it were fine art works by the artist Milan Peterka (curtain, window-panes) and by the sculptor professor Bohumil Dobiáš (fountain, ceramic tiles). The cinema, which can seat 320 people, went into operation at a Gala Opening on 18th December 1976 at 15.00 o´clock. The first film presented was a Russian film, "When September Is Coming".

Cinema in Český Krumlov - the present: 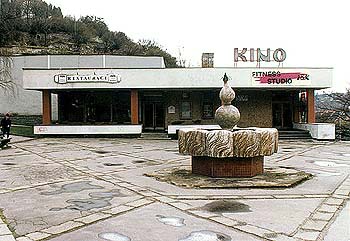 Since 1992 the cinema has been run by JK private company, whose name the cinema carries. There are ca 25 films monthly, including the Film Club. (see JK Cinema in Český Krumlov).